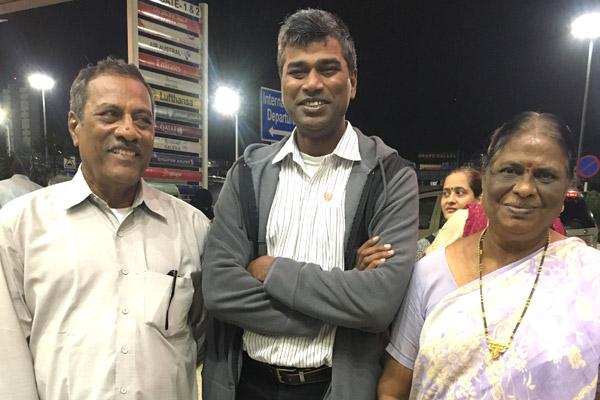 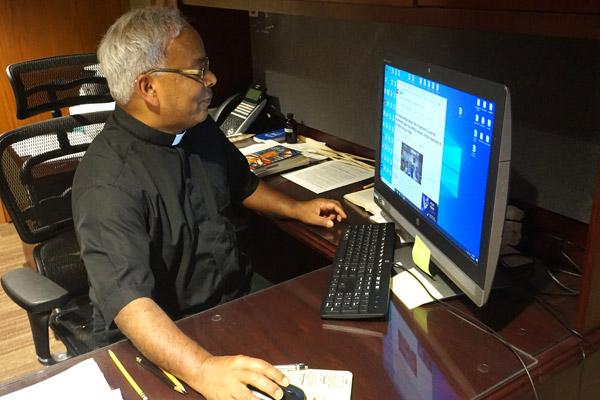 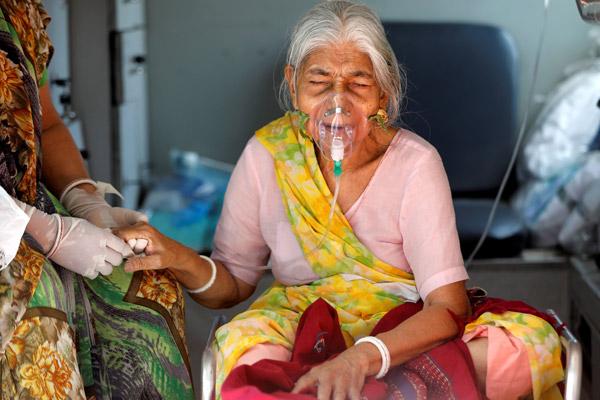 CNS / Amit Dave, Reuters
Lilaben Gautambhai Modi, 80, wearing an oxygen mask, sits inside an ambulance as she waits to enter a COVID-19 hospital for treatment, amid the spread of the disease in Ahmedabad, India, May 5.

CNS / Amit Dave, Reuters
Lilaben Gautambhai Modi, 80, wearing an oxygen mask, sits inside an ambulance as she waits to enter a COVID-19 hospital for treatment, amid the spread of the disease in Ahmedabad, India, May 5.

Catholics can donate toward ending the COVID-19 crisis in India:

Father Aby Abraham, IMS, associate pastor of the Cathedral of St. Andrew in Little Rock, video-chats daily with his siblings, including his sister Laisa Biju, a married mother of three who works as a nurse in New Delhi.

While Father Abraham suspects his sister keeps much of the horror she sees to herself in their country ravaged by a second wave of coronavirus, a continuous stream of deaths is part of her daily life. A May 4 CBS News article stated in the previous two weeks, an average of 120 people in India lost their lives every hour..

“Many people are dying. Many are dying, there’s no doubt about it,” Father Abraham said quietly. “For her, it’s a surprise that many are dying and there are so many cases … We pray for her every day.”

The Diocese of Little Rock has 17 priests from the Diocese of Nellore, India, as well as four from Indian religious orders. As extern priests, they work in the diocese temporarily and will return to India if requested by their bishop.

As of May 4, 20 million cases of COVID-19 have been registered in India since the pandemic began in March 2020, with about seven million of those cases confirmed in April alone.

No oxygen, no vaccines

According to the World Health Organization, India accounted for almost half of the global cases of COVID-19 and 25 percent of the global deaths in the first week of May. On May 5, the country entered its 14th straight day of clocking more than 300,000 virus cases with 382,315 that Wednesday.

Father Balaraju Desam, associate pastor at St. Joseph Church in Conway, came to the U.S. from India in 2016. He speaks daily with his family, sometimes twice a day, accounting for the 10-hour time difference, “Sometimes I’d have to wake up in the middle of the night to give them a call.”

“I’ve been giving them some advice from my side: not to go out, wear the mask, make sure the sanitizer is with you in your pocket all the time, 6-feet distance,” he said, adding two of his cousins and their families are sick from the virus. “They have little kids … they are so much afraid right now. They are just staying at home, just quarantined.”

Crematoriums are overwhelmed, with bodies piling up. Father Abraham said because of the small Catholic population, most are buried, but Hindus are cremated.

For as quickly as COVID-19 can be spread, lives are constantly changing.

“They are so shocked to hear from their friends and their family, immediately with no time, the person passed away. They have no words to say,” Father Desam said of his family who lives in Nellore, in southern India. “And also they were so shocked to hear about some of the priests who died in my state (of India) and even in my own diocese. Father Philip (Louis) died, he worked in Oklahoma, he just went on vacation in India.”

Father Abraham said three priests from his order, the Indian Missionary Society, have died from COVID-19.

Cases began rising in February, with about 10,000 new infections each day, but skyrocketed by late April. Most have criticized India’s Prime Minister Narendra Modi for lax restrictions, attributing the surge to superspreader events: five states held elections and political rallies, as well as the Kumbh Mela festival. That Hindu festival is held every 12 years, with millions of pilgrims washing in the Ganges River to be cleansed of sin. India has the world’s second largest population with 1.3 billion but by area is only the seventh largest country in the world. The United States is 199 percent larger in area, but with only 328 million people.

Along with an oxygen shortage in some Indian states, where people are dying waiting on oxygen in hospitals, there’s also a nationwide vaccine shortage. About 160 million vaccines have been given, according to a May 5 CNBC article.
“People in the United States, they got vaccinated and thank God for that, but we have to pray for the rest of the world and also especially for the country of India right now,” Father Desam said. “There are a lot of deaths every day, every day lots of deaths. At the same time people are suffering from a shortage of vaccines and a shortage of oxygen. There are a lot of people dying on the streets, having shortage of breath, looking for oxygen and the oxygen is not available in the hospitals.”

Father Jayraj Sure, associate pastor of St. Joseph Church in Fayetteville who will be moving to St. Peter the Fisherman Church in Mountain Home and St. Mary Church in Mountain View June 15, is the only active Indian priest in the Diocese of Little Rock who is currently stuck in India. Deacon Matt Glover, chancellor for canonical affairs for the Diocese of Little Rock, said the diocese tried to get him a flight back to the United States before the May 11 lockdown barring anyone from India from entering the U.S., but every flight was booked.

“In effect, we are pretty much stuck waiting to see what the fallout is going to be in India and how long that ban stays in place,” Glover said. “There’s been talk already that the European bloc is going to open up some time this summer to where people could fly to the United States from Europe and vice versa. If that happens, maybe that will help open up possibilities for him.”

Glover added he’s not optimistic about the summer, but more so by the fall. The diocese will fly him back as soon as it’s a possibility.

No new priests were scheduled to come to Little Rock this spring from India.

Father Sure, who moved to Arkansas in 2019, left April 12 to visit India and was supposed to return to Fayetteville May 13. From India, Father Sure messaged with Arkansas Catholic, explaining he traveled to his home country to bless his brother’s marriage.

“I feel sorry and heartbroken to see the horrible situation of India,” Father Sure said.

He is currently staying with his family, who lives in the Prakasam district in the Diocese of Nellore.

Father Sure explained how laborers are finding it difficult to make a living because of the lockdown, and many have died from the scarcity of oxygen and beds in the hospitals for COVID-19 patients.

The Diocese of Little Rock has had a relationship with the Diocese of Nellore since Bishop Anthony B. Taylor came to Arkansas in 2008. He had gotten to know  priests of Nellore while he served in Oklahoma. .

As do most priests from different countries, Indian priests in Arkansas face homesickness; along with the challenges of a different culture and language, they are away from all that is comforting to them, Glover said.

Glover was studying abroad when the 9/11 terrorist attacks happened, explaining he felt “hugely disconnected” from that unfolding tragedy, which was tough.

“You know, we don't need to just offer up just general prayers for these guys, but really show real empathy for what they're going through. That they're away from home, which is hard enough as it is, but they're away from home right now in the midst of a true national crisis and tragedy that's going on,” Glover said. “So just maybe be a little bit more patient with our Indian priests than we otherwise may be. Just showing extra patience and extra kindness and extra attention, and recognize that they're mourning right now, and they're going through trauma right now.”

Catholics can donate toward ending the COVID-19 crisis in India: