He is looking forward to doing ‘a little of everything’ at St. Joseph in Conway 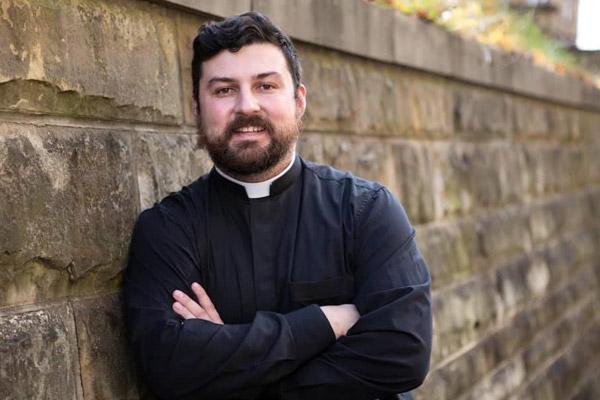 Favorite Scripture: “Lift up your heads, O gates, be lifted, you ancient portals, that the king of glory may enter. …” Psalm 24:7-10

When Deacon Brian Cundall was growing up in Little Rock, Barton Coliseum was associated with the State Fair, not with becoming a priest.

“I went to Barton Coliseum for the rodeo and gun and knife shows,” he recalled.

But on May 29 he will stand in the arena with four other men and commit his life to the Church as a priest.

Cundall has thought a lot about how he wants to live his priesthood and about beginning his first assignment at St. Joseph Church in Conway.

“This goes to my personality: I want to be like a jack of all trades or a Swiss Army knife of diocesan priests,” he said. “Be able to do a little of everything.  I have enjoyed every ministry I have been a part of, from hospital ministry to working with religious education programs, youth groups, old folks and young folks. I have enjoyed everything fairly equally.”

His experiences match up with how he was when he attended Catholic High School. He played the clarinet in the band, was a member of the football and track teams and was an Eagle Scout.

“Even back then, I was doing a little bit of everything,” the CHS 2013 graduate said. “I still play the clarinet. I have gotten to play it at Mass here a few times. There are a couple of guys here (at St. Meinrad Seminary) … we have gotten to do some clarinet trio pieces for Mass.”

Following the example of his dad, Yancy Cundall, Brian thought about the importance of fathers. While in high school, he questioned whether he wanted to give up the opportunity to be married and have children.

As his discernment progressed in the seminary, he came to a new definition of fatherhood.

“I think back to when I was starting out,” he said. “I felt like I was giving that up. All you think about is the stuff you are giving up. I am giving up a family. I am making all these sacrifices of this and that. It wasn’t until later in theology that I realized no, I am becoming a father. In every sense of the word. I am supposed to protect, to provide, to care for and I am supposed to lead. I will do all the things fathers do but for the whole parish community. It was a big realization to see I am becoming a father.”

“When people say, ‘If you need anything, call me,’ you wonder if they really mean it. Bishop Taylor and Msgr. Friend have constantly shown that they mean it. They are always here for us,” Cundall said.

Another vital mentor for him has been his former chemistry teacher. Before Father Patrick Friend joined the seminary, he taught Cundall at Catholic High School.

“It is coming full circle,” Cundall said. “He was one of the first people to tell me, ‘Brian, I think you would make a good priest.’ He is a priest now, and he is going to vest me during my ordination.”

Favorite Scripture: “Lift up your heads, O gates, be lifted, you ancient portals, that the king of glory may enter. …” Psalm 24:7-10