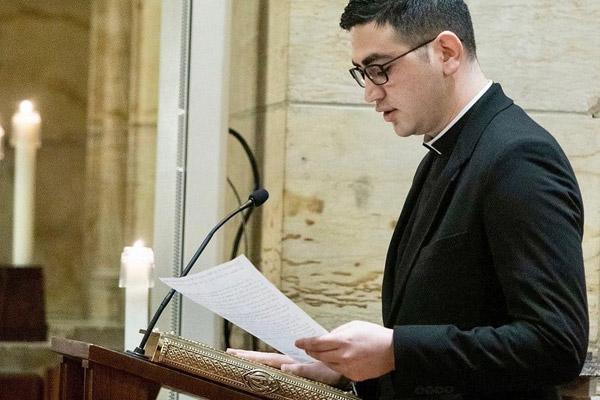 Favorite Scripture: “Although I am free in regard to all, I have made myself a slave to all so as to win over as many as possible … All this I do for the sake of the gospel, so that I too may have a share in it.” (1 Corinthians 9:19-23)

While praying the nightly family rosary, his mother leading the devotion, a 5-year-old Omar Galván wasn’t exactly an example of piety.

“I’d sit next to my sister or brother and poke them at the side,” Galván laughed. “I’d stop the rosary and tattle-tale” that his sister was asleep, though his mother never minded if the children fell asleep. He’d pelt his siblings with beans from across the room. “I was forcing my siblings to suffer with me.”

But his parents never wavered in coming together to pray. Those rosaries, adoration, Mass, all contributed to Deacon Omar Galván’s desire for the priesthood.

“Both of them just gave me a gift to live the faith, to take it seriously,” Galván said.

“I understood the beauty of the rosary” later in life, he admitted. He will be ordained a priest on May 29.

Galván attended Immaculate Conception Church in Fort Smith after moving from Mexico at age 7. His calling to the priesthood was gradual, feeling it as a youth group coordinator, but he decided to go to college instead. After two years, he “ran out of excuses.” Meetings with Father Rubén Quinteros changed his course.

“He said this to me and I always remember it: “If you let your fears decide what God wants for you, you'll never get nowhere. Fears do not come from God … You can enter seminary now, it doesn’t mean you’ll become a priest.’ When I heard that, I felt like a weight had lifted off of me and maybe the priesthood is for me.”

He moved into the House of Formation in Little Rock in 2013 and has been studying at St. Meinrad Seminary in Indiana since 2017. One lesson Galván learned was to be open to God’s love and give it back to him.

“It sounds very cheesy, but it’s very hard. I have to let myself feel my own wounds that I have to reopen, that I don't like to do but have to do. It’s an ever-growing lesson,” he said, with prayer as the cornerstone. “... Our rector always says if you stop praying and stop your relationship with God, you just become another social worker.”

Beginning June 15, Galván will serve as associate pastor at St. Raphael Church in Springdale and St. Joseph Church in Tontitown.

“Out of the sacraments, it’s going to sound really weird, but I’m just in love with the sacrament of marriage, coming from someone getting ordained to the sacrament of holy orders,” Galván said. “The sacrament itself shows God’s love in a perfect way. Two people love each other so much and the love becomes a third person in procreation, that in itself is a beautiful image of God.”

The sacrament is needed in today’s society, he said, explaining, “I think marriage itself pulls you out of your individualistic mind.”

Looking to his ordination, Galván said he wants to embody the role of “Father.”

“I want to be the type of priest people wouldn’t only call me Father because I was ordained a priest,” he said. “But a priest that the people of God say ‘Father Omar’ because they really mean it. That they see it in me, a spiritual father. Not because I'm just ordained a priest. Not just because of the title.”

Favorite Scripture: “Although I am free in regard to all, I have made myself a slave to all so as to win over as many as possible … All this I do for the sake of the gospel, so that I too may have a share in it.” (1 Corinthians 9:19-23)