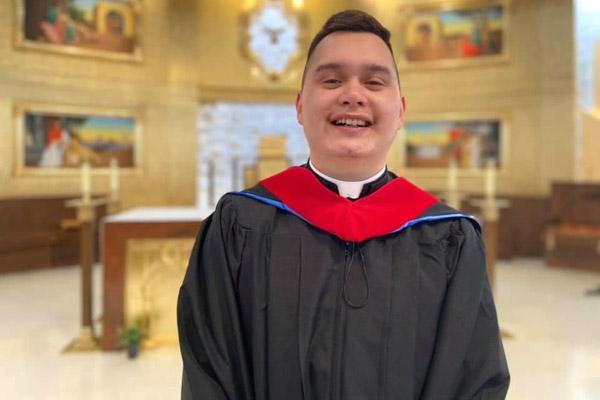 Courtesy Alex Smith
Deacon Alex Smith graduated May 8 from Assumption Seminary in San Antonio and will be ordained a priest May 29.

Courtesy Alex Smith
Deacon Alex Smith graduated May 8 from Assumption Seminary in San Antonio and will be ordained a priest May 29.

Deacon Alex Smith is feeling a mix of emotions ahead of his priestly ordination: excited, joyful, but also reflective, with a thoughtful awareness of what’s to come.

“Knowing where I’m going to be assigned and praying for those people in that area,” Smith said. “... There’s a lot of work to be done. I’m willing, and I’m excited to get started.”

Smith will be ordained May 29, the culmination of a lifetime of saying “yes” to God.

He grew up in Beebe, the only Filipino family in an area with a sparse Catholic population.

“Beebe has grown a lot -- we have Walmart, a Burger King,” the “pinnacle” of big city life, he quipped. The family faithfully attended St. Jude Church in Jacksonville and understood the importance of the domestic church as well.

“Myself and my siblings were able to balance everyday schedules, work, extracurriculars, to make sure our faith was still primary. The little things of praying together and eating together, once-a-week daily Mass together, Mass on weekends, reluctantly singing in the choir. Those kinds of things were what helped me along the way,” he said.

In 2013, Smith entered Holy Trinity Seminary in Dallas after graduating from high school. He moved to the House of Formation in Little Rock in 2015 and finished his philosophy degree there, through St. Gregory University in Shawnee, Okla., in 2017. He completed his theology studies this month at Assumption Seminary in San Antonio.

The 26-year-old had to wrestle with being so young in seminary.

“The reason I’m here is all that matters, I don’t have to prove to anybody ... the Lord is calling me,” he said. “I can believe in that and I can trust in that.”

Smith said the best advice he received in seminary was from Father Vincent D. Bui, who died in June 2020 of COVID-19, after Smith expressed his thoughts, worries and fears about ordination. Father Bui explained how there’s a difference between passion and conviction. Passion can be fleeting, but conviction allows a person to wake up each day and have “a complete sense of wanting to do the works of the Lord, encountering him.”

“We have to be people not just passionate for the Lord, but we need more shepherds that have conviction for the Lord,” Smith said.

It was one of many lessons he’s learned along the way, including how the Lord “wants us to be real, to be honest” over perfection.

“It is not a sprint, but a journey with the Lord,” Smith said. “Each and every day we’re going to have a good day or bad day, but if we give it to the Lord, trust him in his love, life can be a lot easier. Believe me it’s not easy, but once I give it to him, things can be a little bit more at ease.”

He’ll carry that perspective into his assignment as associate pastor of St. Joseph Church in Fayetteville and Sts. Peter and Paul Church in Lincoln, fulfilling a role as a mediator of Christ.

“Faith is not something you come for on the weekends; they live, wake up and go to bed with it every day. It’s their journey with God,” Smith said. “… I hope to be a priest who shares the fruit of his message.”