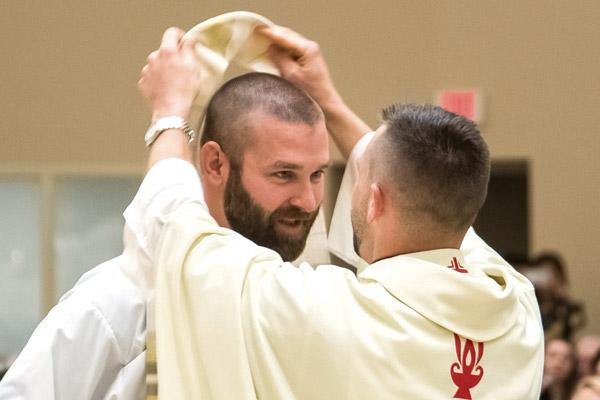 What happens at an ordination?

Click here to learn about the traditions of a priest ordination.

The Diocese of Little Rock expects a larger crowd than usual for the May 29 ordination of five priests.

Incoming vocations director Father Jeff Hebert, who was ordained in 2018, spoke with Arkansas Catholic May 13 about the ordinations of Deacons Alex Smith, Ben Riley, Brian Cundall, Emmanuel Torres and Omar Galván and why every Catholic should attend at least one ordination in their life.

The ordination will be held at 10 a.m. at Barton Coliseum in Little Rock.

How long does a priest ordination last?

I would estimate around two hours.

During a priestly ordination where the deacon becomes a priest is the Laying on of Hands and the Prayer of Ordination. Explain this.

Every sacrament has matter and form. So for baptism, the matter is water, and the form is the words, “I baptize you in the name of the Father and the Son and the Holy Spirit.” So no matter what the sacrament is, there is some matter, and there’s some form. So, in the case of ordination, the matter is not only the man, but the act, the physical act of laying on of hands and the form is the words of that long consecratory prayer; there’s an essential moment ... there’s a specific calling. The bishop will beseech the Holy Spirit to make this man, this deacon, a fellow worker with us in the order of the presbyterate.

Is the laying on of hands referenced in the Bible?

This is 1 Timothy 4:14 ... “Do not neglect the gift you have, which was conferred on you through the prophetic word with the imposition of hands of the presbyterate.” But then also in Second Timothy, he writes, “For this reason, I remind you to stir into flame the gift of God that you have for the imposition of my hands.” So there’s this understanding there’s a principal person laying on the hands, but then the whole presbyterate shares in that.

Why should the faithful attend the priest’s ordination?

This priest, this man has given himself, he’s responded to the call of the Lord, which is actually expressed -- you actually get to consent to it as the people of God. At the beginning of the rite, the man’s called forward, and he says, “Present.” The bishop asks if he’s worthy, and then he accepts. And the actual liturgical moment where you express your consent that, “Yeah, this guy can be my priest,” everyone applauds. And so you get to be a part of that actual acceptance of this man as your future priest.

But also, for the past six to eight years, depending on the individual man’s particular formation process, your contributions, whether it’s been prayer, whether it’s been financial support or just good thoughts, it has been contributing to the formation of this man. Whether it was opening him up to the call in the first place or opening your home to a dinner one time, (or) you may never have met him. Maybe you just saw his face on a poster, but you have contributed to this man’s journey of faith, and you get to be present at the moment where he is literally consecrated. His love is made for you now, and you get to kind of be a part of that meeting. It’s like going to a wedding.

Do you remember the first ordination you attended? What kind of feelings did it spark in you?

The first ordination I ever attended was of Father Mauricio Carrasco, Father Alejandro Puello and Father Juan Manjarrez (in 2012). That was when I was applying to the seminary. This was way back at the beginning, and I’d already met these guys. And I just remember being struck like, “These are just normal guys.” These guys didn’t fall from the sky. These were real flesh and blood men that I could see as brothers. And so for me to witness the part where they’re actually laying down their lives for the sheep, essentially, there on the ground, it was just really moving. I was encouraged; I was inspired by them promising their life and nothing but service to God’s people. So it was really inspiring for me, and that was at the beginning of my vocation kind of journey and formation story that at the front end, it really kind of gave me a lot of energy to do the same, essentially.

As a priest, what did it mean to have lay Catholics attend your ordination, even those you didn’t know personally?

It is moving, I guess, is the best way to put it. Because you know, the seminary process, the formation process, you have limited interaction with the people of God and why you answered the call in the first place was to go be with people. It’s just the nature of the thing; you have to study, you have to go away to pray. But then when you finally get to the point, you’re about to finally do what you were called to do in the first place, go serve God’s people, and they are there, and they’re there to support you. I remember it really hit me when I was distributing Communion, face after face coming forward and it was just so moving. Literally, I was … feeding them the body and blood of Christ, but that they were there with such joy, with encouragement. It’s a beautiful meeting of hearts and of roles within the Church.

What happens at an ordination?

Click here to learn about the traditions of a priest ordination.