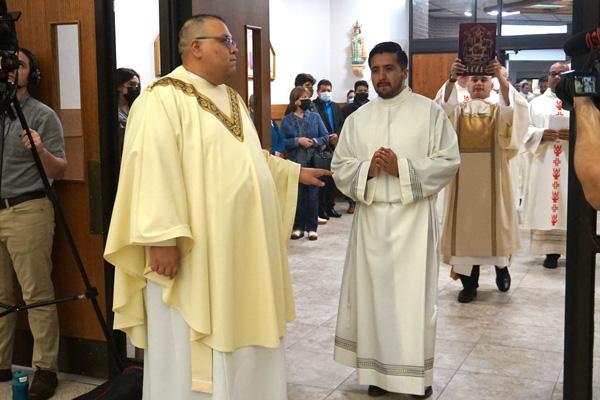 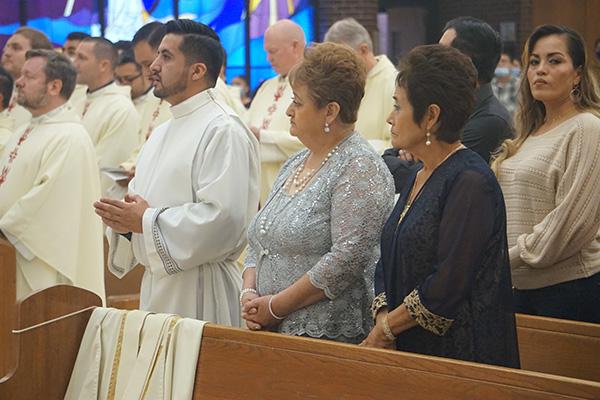 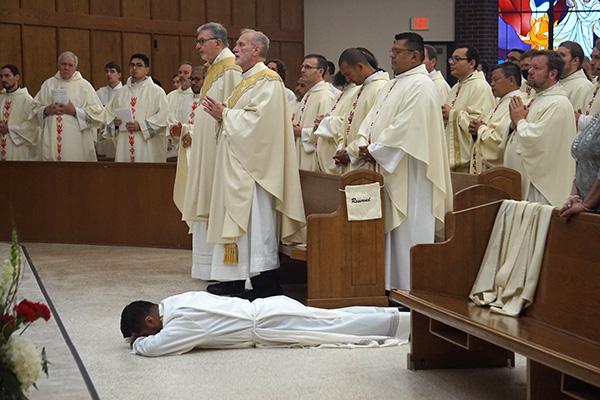 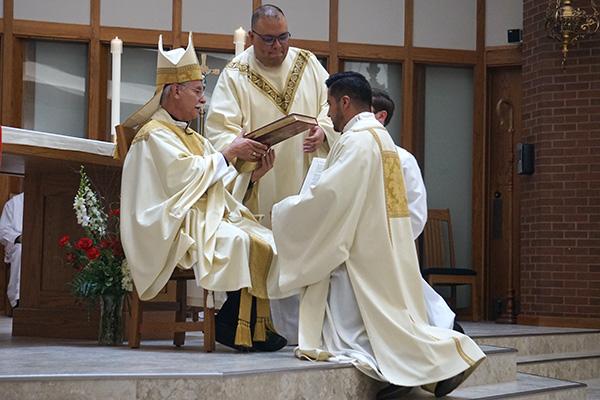 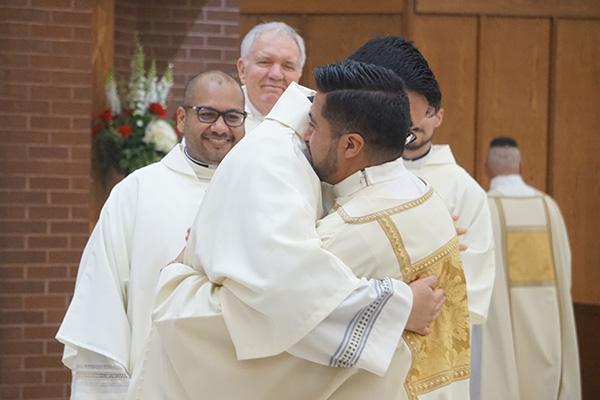 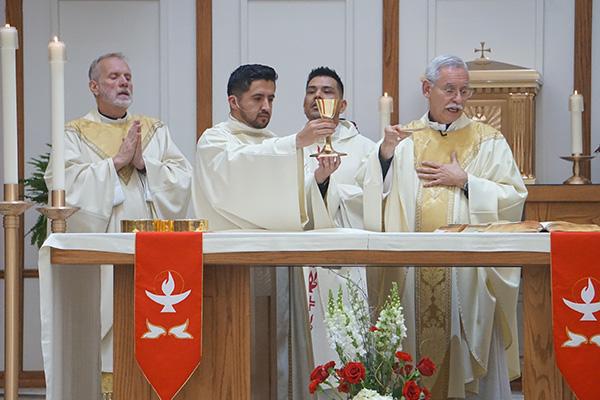 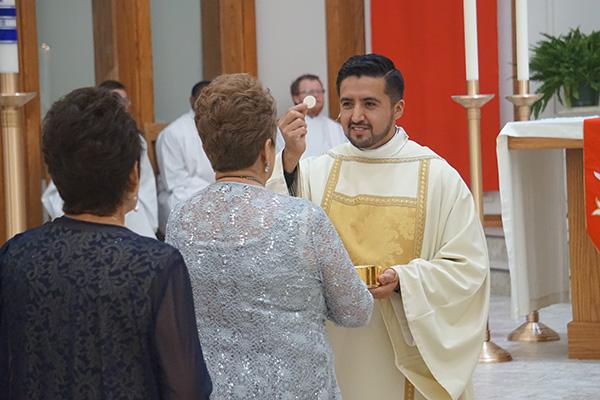 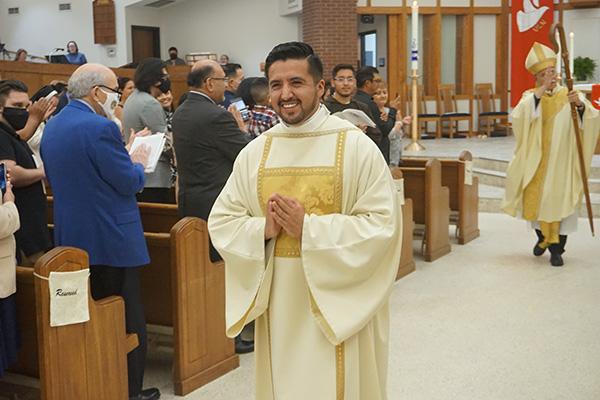 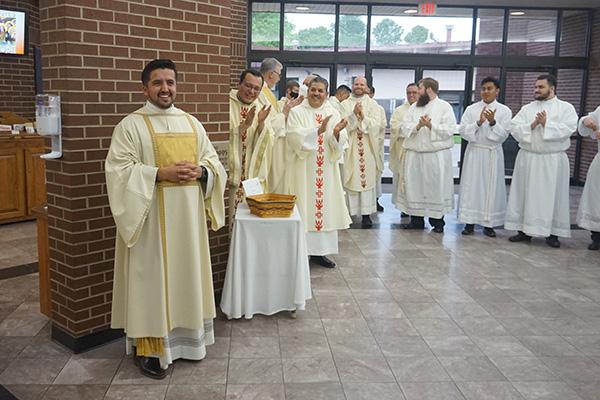 Jaime Nieto, 31, ordained to the diaconate at St. Raphael Church in Springdale 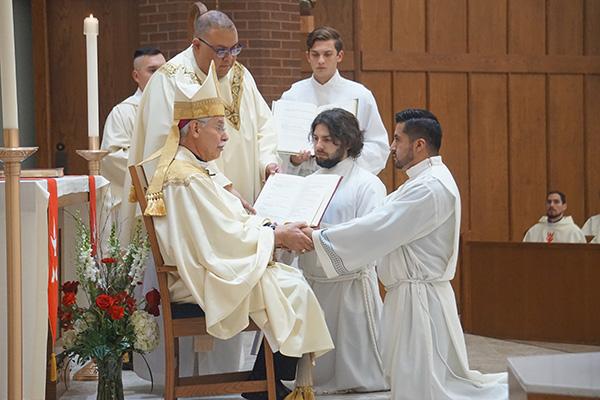 Aprille Hanson Spivey
Jaime Nieto makes his promise of the elect, including respect and obedience to Bishop Anthony B. Taylor during his diaconate ordination at St. Raphael Church in Springdale May 21. Nieto, 31, will be ordained to the priesthood next year.

Aprille Hanson Spivey
Jaime Nieto makes his promise of the elect, including respect and obedience to Bishop Anthony B. Taylor during his diaconate ordination at St. Raphael Church in Springdale May 21. Nieto, 31, will be ordained to the priesthood next year.

SPRINGDALE -- As the entrance hymn “Here I Am, Lord” rang through St. Raphael Church in Springdale May 21 for his diaconate ordination, Jose Jaime Nieto nervously moved forward, each step closer to the life God was calling him. But all his nerves melted away as he laid prostrate during the litany of saints.

“Hearing the prayers of the people and feeling that kind of experience, that prayer of other people there and with all the saints, that was just such a powerful moment laying down there. And hearing all the voices, you can hear like the angels and the saints praying for me as well,” Nieto said following his ordination Mass.

Nieto entered the House of Formation in Little Rock in 2014 and began attending Assumption Seminary in San Antonio in 2018. The 31-year-old is scheduled to be ordained a priest next year. Bishop Anthony B. Taylor celebrated his ordination Mass, explaining in his homily God’s plan for Nieto.

“A vocation is a calling. The issue is not what we want, but rather what God wants. God chooses, God calls,” Bishop Taylor, pointing to the first reading chosen by Nieto, Jeremiah 1:4-9. “... This choice of you for the diaconate and eventually the priesthood had already been made well before you were even ever formed in your mother’s womb. Like with Jeremiah, it was for this very purpose that you were even born. And specifically what was that purpose? To be a prophet to the nations.”

Looking back on his childhood, growing up in San Juan del Rio in Querétaro, Mexico, Nieto said the priesthood never crossed his mind. Raised by his mother, Nieto admitted, “I got in trouble several times for almost burning down the house.” After burning half his mother’s table runner, he planned to run away, bringing with an image of Our Lady of Guadalupe.

For his whole life, “Mary has been guiding my heart to loving her son the way that she did.”

Nieto will be the first priest in his family. After the ordination, his mother, Maria Del Carmen Nieto Bautista, said with a translator, “When he prostrated himself on the floor and seeing him serving up there on the altar for the first time as a deacon was really powerful for me.”

While his mother worked in the United States, he lived with his aunt Beatriz Nieto Bautista, who came from Mexico to his ordination.

“It was a big emotion just to be present here, to accompany him here,” she said with a translator. “And I was so happy and overflowing with joy that I can represent all my family in Mexico.”

At 15, Nieto begrudgingly moved to Arkansas and later joined the youth group at St. Raphael.  He worked at a car wash for six years. Meritza Vega, who met Nieto in the youth group 15 years ago, and his other friends attended his ordination.

“He’s just so down to earth and humble. He really is a Godly man so I think he’ll be a great future priest,” Vega said.

Despite past stirrings about the priesthood, a dream changed everything. Nieto dreamed about coming forward for Communion and the priest handed him a small gold bowl and said, “You’re going to be fine.”

“I kind of fell on the ground in the church and then I woke up,” Nieto said.

At the next Encuentros de Promoción Juvenil (EPJ) retreat, he saw that same bowl in the video regarding a priest ordination. “Oh my God, I was given the chills. It was there, the Lord (saying) this is your light bulb moment. I was crying, I kneeled down.”

During his formation, Nieto said he worked through the idea of connecting with God the Father.

“I had this question of how can I trust a heavenly Father I cannot see, touch, feel? When the earthly father he gave me, he wasn’t there for me to support me, protect me, guide me. How am I supposed to trust someone I can't see?” Nieto said. “I was able to look back at those very difficult moments where I thought I was alone, when I thought God wasn’t there, but he was there.”

Nieto made promises of celibacy, prayer and obedience during his ordination. This summer, he will serve as a deacon at Sacred Heart Church in Morrilton and St. Joseph Church in Center Ridge.

“One of the things I look forward to is being able to celebrate some of the sacraments, the baptisms and weddings,” Nieto said, recalling the image of Jesus’ baptism. “‘This my beloved son, with whom I’m well pleased.’ I strongly believe those are the words God says every time a person is baptized.”