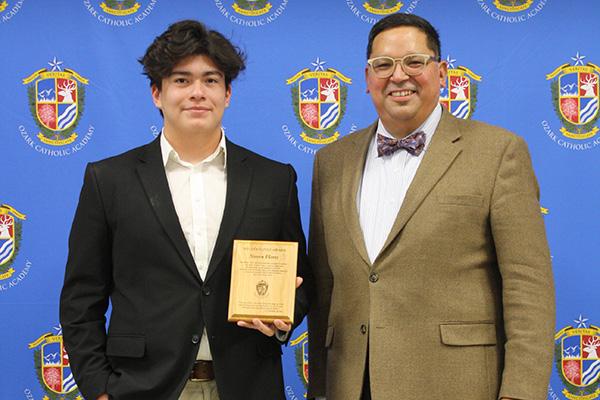 TONTITOWN -- Stephen Flores took the road less traveled. For him, that decision has made all the difference.

Flores switched from public school to Ozark Catholic Academy the summer before his senior year. He left behind a high school career in football and involvement in school clubs to broaden his faith life and education. Although he was involved in Life Teen and had attended the diocesan retreat Search, he felt called to do more.

Flores enrolled at OCA, knowing he would be one of the founding members of the school’s first senior class.

“To me, it was a calling to be at OCA,” he said. “The Gospel story of the disciples and Simon Peter, being asked to leave everything and follow Jesus even when they were uncomfortable kind of influenced me, too.”

A former first-string tight end for a 6A school, Flores’ decision was met with mixed reactions.

“Most of my former teammates were supportive, but a few felt as if I should have been there to play my senior year,” Flores said. “I had always thought I wanted to play football in college, but I really didn’t know what I would do academically.”

He promptly filled the void left by football by joining the OCA basketball team.

“I have always been a part of a team and the basketball team gave me that sense of community and friends,” Flores said.

He played in a few junior varsity games and traveled to varsity games the entire season. Despite being a first-year player, teammates looked up to the 6-foot-1-inch student.

For his senior capstone project, Flores decided to study “Astrophotography and the Importance of Astronomy.” The project opened up new worlds for Flores, pushing him to explore and research astronomy. After his final presentation in March, Flores committed to attend Benedictine College in Atchison, Kan., to major in astronomy.

“Coming here really helped me know what I wanted to do in college,” he said.

In April, he played a lead male character in William Shakespeare’s “Twelfth Night.”

“I never saw myself doing anything like this,” Flores said with a laugh, “but I definitely grew from it.”

Flores, son of Angel and Rosa Flores of St. Vincent de Paul Parish in Rogers, embraced these first-time experiences and showed the faculty that he embodied the school’s virtue of “docilitas,” a willingness and openness to learn. He was given the Docilitas Award, one of four of the school’s most coveted awards given to seniors. He was also inducted into the inaugural Order of the Gownsmen, a group of graduates who have exhibited excellence in academics, community service and dedication to OCA.

“I learned so much about faith and the importance of Catholic education,” he said. “Being able to go to Mass and have confession after Mass was the coolest thing. Having my classmates be on the same walk with me and praying before games also helped me strengthen my relationship with Christ.”

OCA students work hand in hand with needy in Appalachia