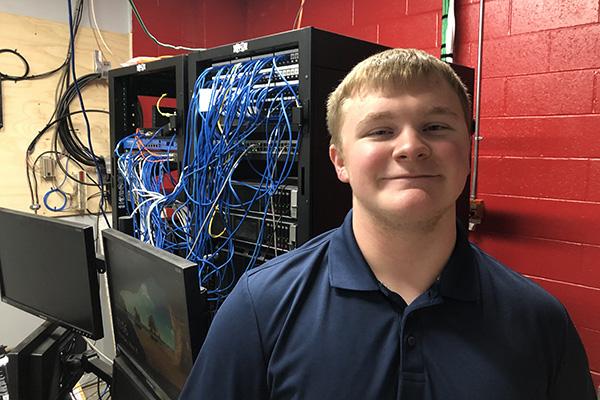 Aprille Hanson Spivey
Thomas Buser, 18, smiles in the server room at Sacred Heart High School in Morrilton May 10. Since sixth grade, he has helped the school with IT support and setting up networks.

Aprille Hanson Spivey
Thomas Buser, 18, smiles in the server room at Sacred Heart High School in Morrilton May 10. Since sixth grade, he has helped the school with IT support and setting up networks.

MORRILTON -- At about 5 years old, Thomas Buser put on his hard hat, gloves and grabbed a hammer -- he was ready to destroy stuff.

“My dad is an electrical engineer. Because of that, I've always been around computers and things. When you get rid of an old computer, you get rid of the harddrive,” Buser said.

Today, it’s more about fixing technology and strengthening his videography skills. Son of Bob and Susan Buser, the 18-year-old senior has been Sacred Heart School’s go-to IT guy since sixth grade. Previously, he attended St. John School in Russellville and helped his fellow grade school students update passwords and install computer programs if his dad couldn’t be there, “just little things,” he explained.

“That was my initial foray into networking and computer administration,” Buser said.

The phrase “Somebody go get Thomas,” is a popular one at the Morrilton school. He has provided tech support and streamlined school and business networks. Buser said one of his biggest technology projects for the school was spending two weeks in the summer 2019 on the inventory of 200 computers -- detailing the operating systems, hardware and software. Buser said he is compensated for certain projects; others are volunteer.

“If there is somewhere I can help and do good, especially to help people that I love, I prefer to certainly go and do that,” Buser said. “... IT work can be very, very expensive, especially for small Catholic schools … (that) may not get the funding for what they need to do. I found with reading a lot and a lot of researching on YouTube and endless forums on how to set things up, I can do that better and faster and do that free for them and make their lives better.”

When the COVID-19 pandemic hit, Buser set up video equipment and began recording Sunday Mass each Friday afternoon to upload it to YouTube the next day.

“The most interesting thing about technology to me is that there really is not a limit as far as what you can do with it. It doesn’t really matter your physical ability or really financial ability; you can get cheap computers that you can write incredible programs on,” he said.

For Buser, his limits were tested in 2017, after he woke up with dizziness and nausea, to the point he couldn’t stand. He was diagnosed with the rare Labyrinthitis, causing inflammation in the inner ear and swelling of a nerve. A steroid injection calmed down the swelling, but the condition left him with 7 percent hearing in his right ear and a lack of balance.

“I have to be kind of careful of where I am all the time,” he said, making sure to stand next to someone appropriately so he can hear them.

Buser, who will attend the University of Arkansas, majoring in computer science, said he knows everything happens for a reason.

“Regardless of whether a person realizes that at the time or not,” Buser said of the biggest faith lesson he learned at Sacred Heart. “Really, I was not as social of a person before I lost my hearing, but of course I have to be a little bit more now and let people know about it, because it makes it a little bit difficult speaking to other people.”