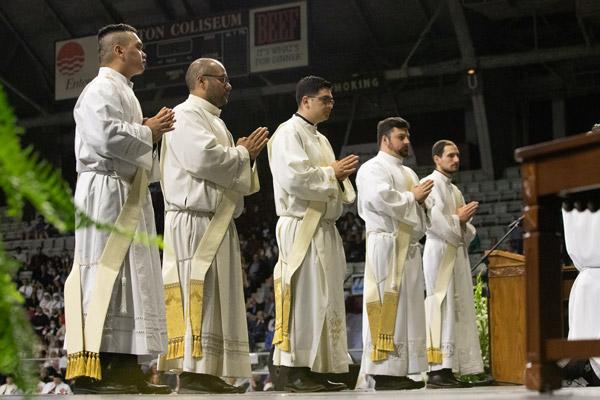 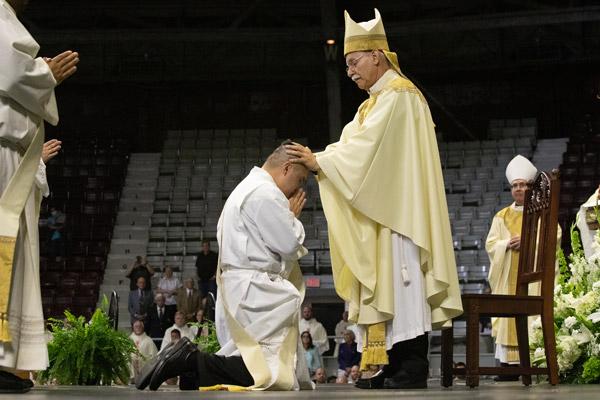 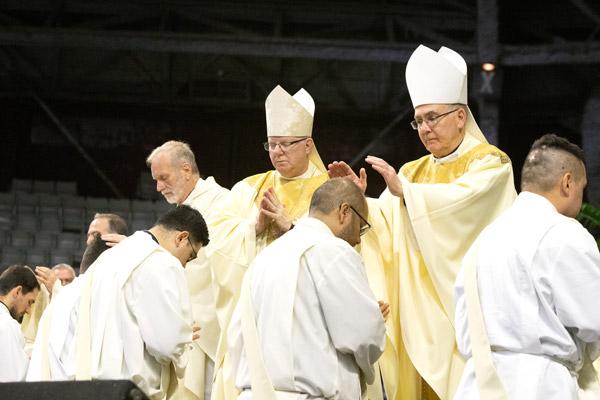 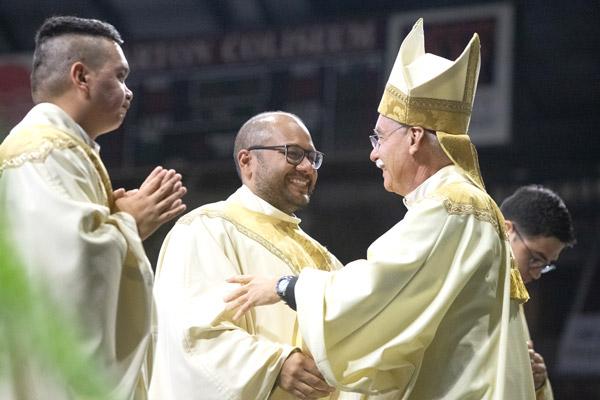 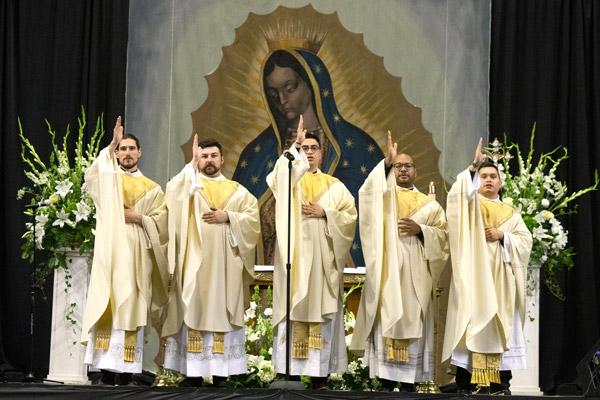 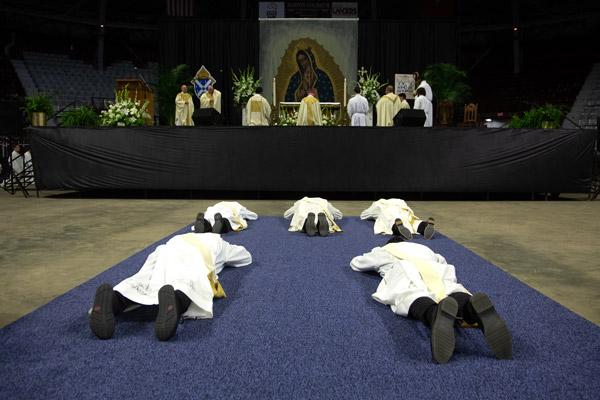 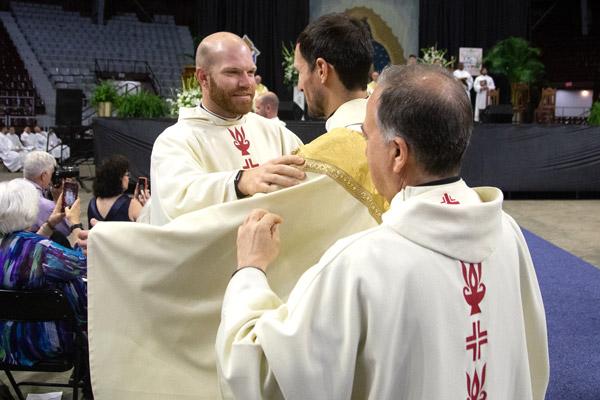 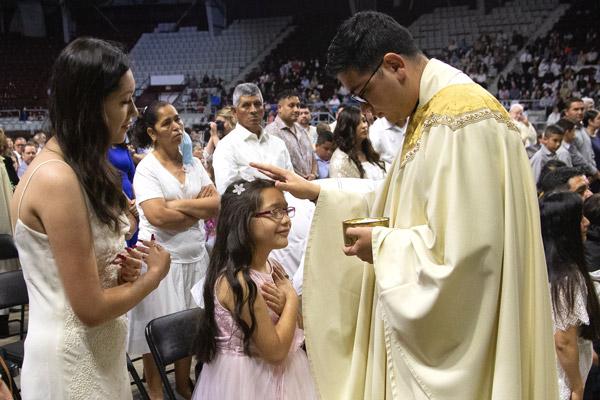 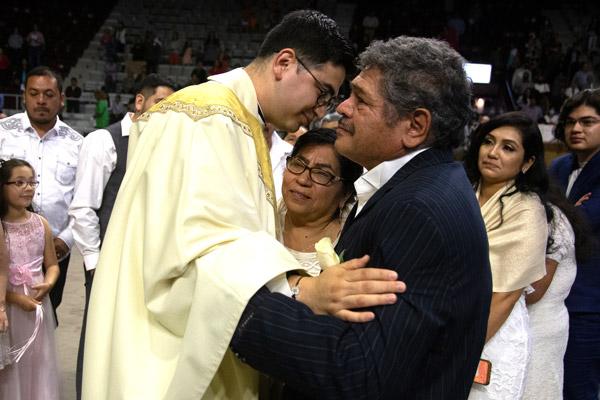 Bob Ocken
The five men seeking ordination lay prostrate on the floor of Barton Coliseum as a sign of surrender before God while the congregation sings the Litany of Saints.

Bob Ocken
The five men seeking ordination lay prostrate on the floor of Barton Coliseum as a sign of surrender before God while the congregation sings the Litany of Saints.

At about the midpoint of the May 29 Mass celebrating the priestly ordination, the five latest priests of the Diocese of Little Rock turned, newly vested and resplendent, to face the crowd. As one, the crowd of 1,800 rose to its feet as thunderous applause bounced off the walls of the historic Barton Coliseum.

The standing ovation was a moment Father Emmanuel Torres, who’d spent 11 years getting to this day, struggled to put into words afterward.

“Very happy, I’m feeling very, very happy,” he said, beaming. “During the intercessions, I was just praying for help in my ministry.”

Father Torres, along with Fathers Brian Cundall, Omar Galvan, Ben Riley and Alex Smith, were ordained during a nearly three-hour bilingual Mass. Officiated by Bishop Anthony B. Taylor and concelebrated by Archbishop Emeritus J. Peter Sartain, Taylor’s predecessor, and Bishop Francis I. Malone of Shreveport, formerly a priest in the Diocese of Little Rock, the event was also witnessed by more than 100 diocesan priests, deacons and seminarians.

In his homily, Bishop Taylor echoed a familiar refrain. To the five honorees he said getting to this day started with answering the call of Christ; henceforth, they must echo Christ to others, without limitation.

“The phrase ‘once a priest, always a priest’ means two things,” Taylor said. “It doesn't only mean that you will soon be a priest for the rest of your life. It also means that you are always a priest, ‘another Christ,’ all 24 hours of the day.”

The rites of ordination are alternatingly somber and celebratory. At one point, the ordinands lay prostrate on the floor while the congregation kneeled and recited the litany of saints. The symbolism for this is dying to one’s former life and, upon standing, to have risen to a new life in the priesthood. It is a gesture of deep symbolism and profound meaning; to many priests, the singular moment of the ordination Mass.

“It was a long time coming; it was a little more emotional than I anticipated,” Father Riley said. “It’s just a joy that comes from God. There’s no other way that I can describe it. I’m just so, so happy and ready to serve Christ in his Church.”

For the guest bishops, it was a chance to see the fruits of their work in the diocese ripen right before their very eyes.

“I’ve had the privilege of ordaining quite a few priests, but I always marvel at the fact that God’s call is always there, sometimes from the youngest age,” Archbishop Sartain told Arkansas Catholic after the Mass. “I knew some of these guys when they were young, very young. To see the fruit of God’s call that he first gave them many years ago, it’s really pretty astounding.”

“For me personally, it’s a day of tremendous joy because I've watched these young boys grow up,” said Bishop Malone whose last Arkansas assignment, Christ the King Church in Little Rock, produced the largest number of vocations. “I remember giving them first Communion, watching them in grade school and high school and so forth. And then being a part of their decision to go into the seminary, it's just a great grace. I’m just grateful to God that the gift of my priesthood in some way touched theirs.”

The ordination Mass was the largest ordination the diocese has hosted since 2017. Lately, larger ordinations have been held at Christ the King Church in Little Rock, but with COVID-19 precautions to consider the diocese chose to move it to Barton Coliseum to allow plenty of room for all attendees.

The event took on special significance for Msgr. Scott Friend, whose 16-year tenure as diocesan vocations director will officially come to a close June 15. Msgr. Friend, who will become pastor of Blessed Sacrament Church in Jonesboro, is considered the architect of the greatest vocations comeback story, producing 44 priests with 24 more in formation, lowering the average age of diocesan priests by nearly 20 years in the process.

After the liturgy, Msgr. Friend admitted this group held a special place for him.

“These guys that got ordained this year, four of them were in our first group to run through the Formation House (in Little Rock),” he said. “So, it’s like being able to see the finish of something that we got started. And these guys, knowing their struggles and walking with them through that, it’s always — I don’t have words to express how it makes me feel inside.”

Each bishop and priest in attendance processed across the massive stage and, under the gaze of Our Lady of Guadelupe looming from the backdrop, laid hands on each of their five new brother priests.

Father Smith described that moment as the Mass’s high point.

“Definitely the imposition of the hands of the bishop as well as the other bishops and as well as all the priests, my brothers now,” he said. “When they put their hands on me, it gave me the peace of God.”

Later, gravitas melted into joy as the line returned to embrace each new priest in welcome. That concluded, the five formed a huddle in the middle of the stage, sharing a personal moment in which they will be bonded forever. For Father Galván, entering the priesthood with his four companions was extra special.

“It’s a true blessing more than anything,” he said. “Four of us went to the same seminary and the one who didn’t, I am close to him too. I know I can rely on them, and they can rely on me.”

After Mass, the five were mobbed on all sides by family, friends and well-wishers. Congregants lined up 50 deep to receive a personal blessing, while hundreds of photos snapped on cameras and phones throughout the auditorium. It was all too much for Father Cundall to describe in depth.