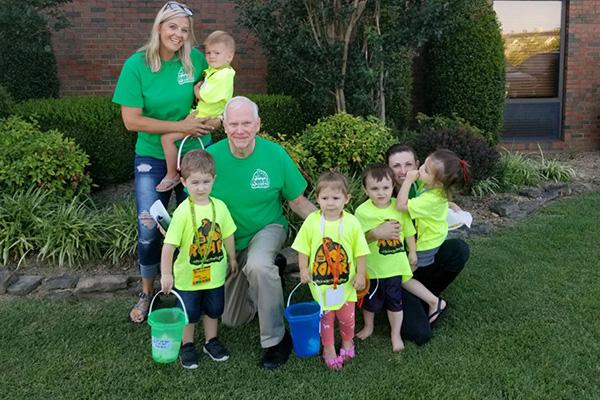 Courtesy Holly Coffman
Father James Fanrak, pastor of Mary Mother of God Church in Harrison, smiles with children from vacation Bible school in June 2019. Father Fanrak, whose first 20 years of ministry were spent as a teacher, is celebrating 50 years as a priest.

Courtesy Holly Coffman
Father James Fanrak, pastor of Mary Mother of God Church in Harrison, smiles with children from vacation Bible school in June 2019. Father Fanrak, whose first 20 years of ministry were spent as a teacher, is celebrating 50 years as a priest.

Early on Sunday mornings as a teenager in Philadelphia, James Fanrak and a few other knights of the altar -- now called altar servers -- would wait on the corner for Father Buckley to pick them up to serve at two Masses, one at Sacred Heart Home for the Infirm and another at a local convent for religious sisters.

“I think it had a big effect, that I would want to be like him in his life of service,” he said of Father Buckley. “By participating in Mass and knights of the altar, all of us tried the seminary.”

Father Fanrak, 78, pastor of Mary Mother of God Church in Harrison for the past 10 years, is celebrating his 50th jubilee of priesthood.

“I would hope that I would be cooperating with the grace of God within me to present Jesus our Lord to all I meet and to minister to them as Jesus would,” he said of the priest he strives to be.

Born and raised in Philadelphia, the middle child of three boys, Father Fanrak received a Catholic education and attended Nativity of the Blessed Virgin Mary Church.

“My first inclination was to be a teacher in a Catholic school where I spent so much time.

I always had priests as teachers,” he said.

He received his bachelor’s degree in education from Niagara University in New York, a Vincentian college, where his life as a student was closely spent with seminarians and priests.

“It was a gradual discerning, and mainly the discernment was continuing to talk to a spiritual director” during his final years of college, Father Fanrak said of his calling to the priesthood. After graduation, he became a seminarian and attended The Catholic University of America in Washington, D.C., earning a degree in theology. He later earned a master’s degree in pastoral psychology from St. Charles Borromeo Seminary in Philadelphia.

On June 5, 1971, he was ordained at Our Lady of Ransom Church by Cardinal John Joseph Krol for the Archdiocese of Philadelphia.

“I remember that was a very significant moment when I was laying there in prostration, offering myself, saying, ‘Lord let this be your will, may I be able to do it’” and asking for his help, Father Fanrak said.

For 20 years, “I was doing both of my life ambitions,” as a priest and teaching in Catholic schools, he said.

In the 1990s, Fanrak discussed the priest shortage in the Diocese of Little Rock with Philadelphia native, Msgr. Bernard Malone.

“He was kind of my mentor in a way and my introduction to Arkansas,” Father Fanrak said.

He stayed a few months with Msgr. Malone at St. Patrick Church in North Little Rock.

“By shadowing him and watching him on his routine, I was exposed to and learned about how they ministered here. It was actually my first real involvement in Catholic (pastoral) ministry.” Msgr. Malone was his spiritual director until his death in 2017.

With Bishop Andrew J. McDonald’s blessing, Father Fanrak became associate pastor of St. Peter the Fisherman Church in Mountain Home in 1991. On June 1, 1993, he was incardinated into the Diocese of Little Rock.

“I can serve and give my time and energy and efforts in building up the Church in Harrison,” he said is the best part of pastoring Mary Mother of God Church. “The other thing I'm impressed with is the support, encouragement and welcome of the families there.”

While more active with basketball and tennis in his younger years as a priest, these days he enjoys fishing and hiking almost weekly.

“It gives me time to relax and reflect and re-energize and to go back and once again do all that I can to minister to my parishioners and the sick and shut in,” he said.

Father Fanrak said throughout his 50 years in ministry, the supportive nature of his fellow priests has grown, feeling more a part of a team with both priests and the laity.

“I have really come to understand how really blessed I've been and how enabled I've been because of the other priests in my life and all of the parishioners whom I have ministered to,” he said.

CORRECTION: An earlier version of this article incorrectly stated that Father Fanrak is the nephew of Msgr. Bernard Malone. This article has been updated.