Deep faith of Johnny Cash will be on display in Washington 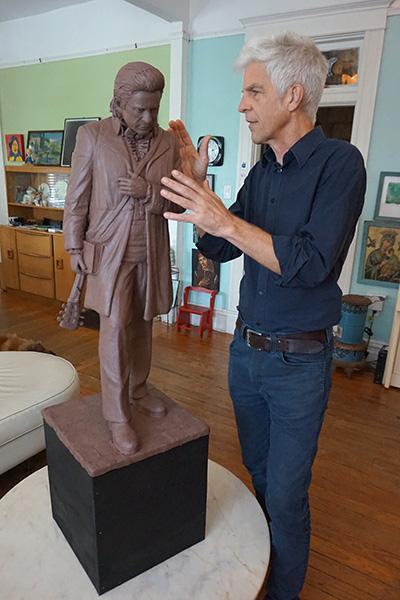 Aprille Hanson Spivey
Artist Kevin Kresse, of Little Rock, describes his vision for the Johnny Cash statue chosen to represent Arkansas in the National Statuary Hall of the U.S. Capitol. He designed a reflective Cash to celebrate his faith, music and advocacy for the marginalized.

Aprille Hanson Spivey
Artist Kevin Kresse, of Little Rock, describes his vision for the Johnny Cash statue chosen to represent Arkansas in the National Statuary Hall of the U.S. Capitol. He designed a reflective Cash to celebrate his faith, music and advocacy for the marginalized.

As a child attending St. Patrick Church in North Little Rock, Kevin Kresse, the 10th of 11 children, remembers admiring the stained glass windows and other art that created a stunning space of beauty.

“There was a beautiful Pietà sculpture there when you walk in that I would always stay and linger at and inspect,” Kresse, 59, of Little Rock said. “Michelangelo was a hero, and of course, most of his work was for the Church. And it's always imbued I think with this idea of spirituality, soul that as a young person, not even being able to put words to it on why it was compelling to me, it set a bar for me that I wanted my work to convey that, whether it be a painting or a sculpture.”

On June 15, he reached the pinnacle of that concept, conveying the spirituality and soul of the late Johnny Cash, who died at 71 in 2003. Calling it the “biggest day in my art career,” Kresse’s design for a statue of the music icon was chosen to be displayed in the National Statuary Hall in the U.S. Capitol, with overwhelming support from the Capitol Arts and Grounds Commission, the National Statuary Hall steering committee and the Cash family. Benjamin Victor of Idaho will sculpt civil rights leader Daisy Gatson Bates. Kresse was the only Arkansan vying for the honor. Three finalists competed for each sculpture.

Each state has two bronze or marble statues in the U.S. Capitol, but in 2019 the state Legislature voted to replace Arkansas’ existing figures with likenesses of Cash and Bates.

“One is just the prominence of having work in the U.S. Capitol, and that's why it's, as far as careerwise, it's the biggest. Plus the fact that I had already been working on my own on honoring Arkansas musicians that I greatly admire. So the fact that one of my heroes that I had already just been working on my own dime came up, I was thrilled beyond repair that this was happening,” Kresse said, adding the Cash family’s support was an extra thrill. “Johnny Cash means something different to so many people, and he's such an icon. But for the family, he is their father, or their brother. And I think if you can capture that person, it makes for a more interesting sculpture. And it makes for a more soulful sculpture, rather than trying to capture the iconic Johnny Cash.”

Kresse, a married father of three, attended St. Patrick School, was a 1979 graduate of Catholic High School and now considers himself spiritual. His mother, Dorris Kresse, is a member of St. Patrick.

“It's interesting because Catholic High is a very meat and potatoes school. But I think the structure of it helped give me a good basis on which to make a living on my own,” Kresse said.

Kresse’s work has been exhibited across the country. He sculpted the St. Fiacre statue for St. Joseph Center of Arkansas in North Little Rock.

“Some of my favorite opportunities have been doing pieces for hospitals because I think that's where art can do its greatest work and serve its greatest purpose,” Kresse said. “... And so I'm always thinking, how can the piece serve someone, the soulful part of a person and not just something that's pretty to look at? And I tend to want to put that idea in everything I do.”

The model for the statue was his third rendering of Cash, having previously created two busts of him, one as part of an art collection celebrating musical icons of Arkansas, and the other to go along with the statue.

Since the state announced two years ago it would commission artists for the project, Kresse’s statue has gone through several incarnations. He admits it took time to get past the “obvious” renderings of Cash as the showman, swinging his guitar to entertain a crowd, along with his deep, commanding “Hello, I’m Johnny Cash” persona.

Cash, who grew up in Dyess (Mississippi County), was formed through the childhood grief of losing his brother in a tragic accident and by his experience of addictions, giving him a unique love for broken people. The Man in Black was known for his social justice initiatives for Native Americans, inmates and workers,  and for his deep faith in God that was firm but never abrasive and part of everything he did. Kresse said his sister was working as a nurse in Nashville in the 1970s when Cash’s son was in a room adjacent to the nurses' station.

“They had a very ill, young girl coming into the hospital, and the nurses were talking because they didn't know where they were going to put her,” Kresse said. “And unbeknownst to them, he overheard them talking, and he came out and he said John Carter is going to be fine now, and he insisted that that girl take their room next to the nurses’ station.”

Kreese’s statue is a reflective Cash, looking down, with his guitar slung on his back, quietly holding a Bible at his side.

“I like the idea that where the Bible is, the guitar strap is like a line that leads up to where his hand is on his chest over his heart, where all of his soul, all of his music, all of his voice and everything is resonating out and coming up,” Kresse said. “And then it keeps going to where it connects to the guitar which is like, I saw almost as a backpack that took him all over the world to spread his message.”

The 8-foot-tall bronze figure will be installed in the U.S. Capitol by the end of 2022.