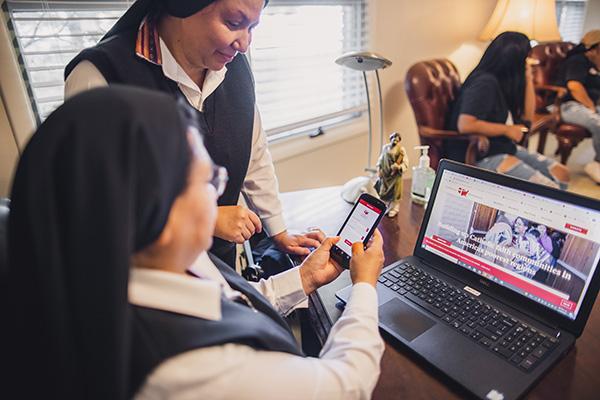 A few key ingredients are mixed together when Sister Maria Minerva Morales Manuel, MCMI, meets with parishioners in need of guidance: prayer, listening, teamwork — and the Power BI app.

The app, developed by Catholic Extension, helps track data from all interactions Sister Maria and two other sisters have with local people, as well as trends to help them better serve the community.

“The app has been very helpful and useful in my work. We’re able to include basic information ... but then also needs assessment. That has been very useful because we’re able to track what the needs are for each individual, each family we come across,” Sister Minerva said through a translator. “And that helps identify and determine what tools we will need to be able to support that family or that individual … We’ve seen a rise of depression and anxiety.”

Sister Minerva works with two other members of the Missionaries of Charity of Mary Immaculate, Sister Deyanira González Alvarado, the local superior, and Sister Sandra Judith Estrada, MCMI, at St. Raphael Church in Springdale. They meet daily with parishioners who are primarily Latino.

The sisters, who came from Mexico and Guatemala to northwest Arkansas in 2019, use the Power BI app, launched in March 2020, to log each significant interaction dealing with human development concerns -- from sickness to family issues -- that they have with individuals, families or groups. An interaction can be identified as a first-time meeting or a repeat, along with the nature of the conversation. The sisters can also include additional information about each visit, including a first name or pseudonym for later reference if needed. The data is then tracked for trends in each diocese, which directs their academic courses and training toward giving them the tools to address specific issues plaguing their parish communities.

“It helps the sisters really focus on what the biggest needs are, especially given COVID, identifying and recognizing what kind of services they can provide to best support the families in the community,” said Erika Cedrone, Catholic Extension senior director of missions.

It is used by 30 sisters across 10 U.S. dioceses in Catholic Extension’s U.S.-Latin American Sisters Exchange Program. The five-year program brings Latin American sisters to the United States to serve in dioceses that have a healthy Latino population but limited resources to cultivate it. The sisters are studying for their master’s degree in integrated studies-human services and pastoral care. The Diocese of Little Rock has been active in the program since the first group of sisters came to Springdale in 2014.

“They are already there doing that pastoral ministry, working in the community, seeing things first hand. They become, oftentimes, the natural person that families and children feel comfortable talking to and seeking advice from,” Cedrone said.

Throughout the country, more than 20,000 interactions have been logged, with the top concern being depression. The Springdale sisters have logged close to 3,000 interactions in the past year and a half. Trends show that the main concerns are mental health, leadership and family issues. Sister Minerva, who came in October 2019, said she has seen depression among those she meets, with past trauma surfacing after a year of isolation. But for teenagers, limited connection with their parents has led some to harmful behaviors.

“First of all, they’re affected because they have a lack of cultural identity. So they're in a situation where they don't really know who they are culturally,” Sister Minerva said. “And then, that obviously puts them in a path of, in many cases, drug addiction, alcoholism or just not finding a sense (of purpose) from life.”

Listening and giving teenagers a space to express themselves is the first step, followed by a team effort that includes the parents, teens, often a school counselor and the sisters.

The sisters at St. Raphael and around 80 other sisters went through the four-week Trauma Recovery Associates online training in April and May, which gave them the training on how to identify signs someone is suffering from trauma, what questions to ask and how to be a good listener in those situations, Cedrone said.

“It's been very useful because I learned along with others not only the importance of listening and accompanying the parishioners but also helping them to find a way to allow people to recognize that there's an issue going on, that there are issues from the past. To recognize it and ask themselves, ‘Why am I feeling this way?’” Sister Minerva said. “Then once they're able to identify whatever it was from the past, helping them deal with it, heal. So that can also have a healing effect in the present with their family dynamics, so that's been key. Learning ways on how to help people identify, deal and heal with trauma from the past.”

In order for the Church to meet people where they are today, after living through a pandemic, Sister Minerva said it will take a team effort, everyone from the pope to the laity.

“There's got to be a visible and a palpable sense that the Church cares, that the Church is there and is willing to address the urgent needs of the people. So it's important to acknowledge what those needs are,” she said. “And then also, not be indifferent, that is so important. Not be indifferent, know that there are issues and help provide the resources for the people.”