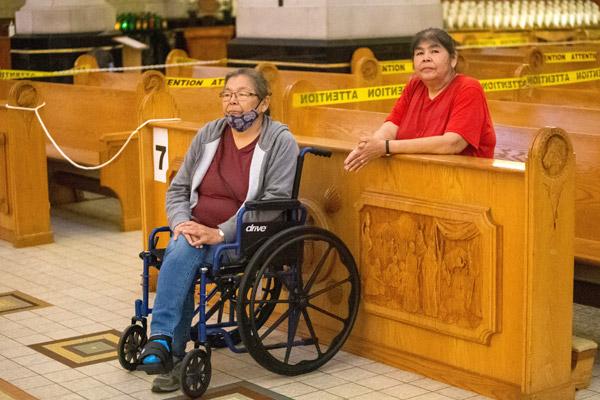 STE.-ANNE-DE-BEAUPRÉ, Quebec -- At the annual First Nations Sunday Mass, Cardinal Gérald Lacroix acknowledged that the revelations and realizations surrounding unmarked graves at former residential schools run by Catholic communities "have brought to light a very dark page in the history of our country. Decisions and behaviors, both by the government and the churches," have contributed to the suffering "of our "brothers and sisters."

"God did not fail. We have failed," he said in his homily June 27 at the Shrine of Ste.-Anne-de-Beaupré. However, he added, choosing paths of life "is within our reach."

"We cannot change this sad chapter in our history," he continued about the suffering of Canada's native peoples. "We cannot afford to forget it. But we must work for reconciliation and healing to heal the wounds of this past that never ceases to haunt us."

The traditional First Nations Sunday celebration, which could not be held last year due to the pandemic, was held without the usual pomp and circumstance. This year's Mass was limited to 250 people because of the ongoing COVID-19 measures. There were no dancers and no traditional costumes often worn by many of the faithful on that day. The Indigenous presence in the basilica was discreet, contributing to the introspective atmosphere of the celebration.

"In recent weeks, we have heard many reports that have reopened the wounds of a painful past," said Cardinal Lacroix. "We are not here this morning to debate these realities. Other places, other times are more appropriate for an open and frank dialogue."

He said he was "full of hope" for the announced meeting between Pope Francis and representatives of First Nations, Inuit and Métis peoples who are scheduled to visit the Vatican before the end of the year. Cardinal Lacroix said he is confident that the pope will be able to "say the right things and do the right things."

He spoke again at the very end of the Mass, addressing the Indigenous peoples who were in the church or following the celebration live on the internet.

"Know that our Catholic community is committed to continuing the journey with you, in search of the truth that sets us free, on the road to reconciliation that allows us to heal," he said, before referring to two saints.

He began by recalling the meeting between St. John Paul II and the First Nations Sept. 10, 1984, at the same shrine. The Polish pope spoke of the Gospel that "nourishes from within" Indigenous cultures.

The cardinal exchanged his usual episcopal crosier for a walking stick in which a relic of St. François de Laval, "a man who had so much love for the First Nations," is embedded. "He defended them tooth and nail, he loved them and they loved him. May we regain those bonds of friendship and trust that we have broken over the centuries. With God's blessing, it is possible," he said.

Two Innu sisters had come from Sept-Îles to attend the annual event. Rose-Aimée and Henriette Vollant said they were "really touched" by the celebration, especially in this period of truth-seeking.

"It seems like the Innu nations are going to rise and be stronger," said Henriette Vollant. "We will be strong."

She noted that because of the suffering caused by the government and some priests, many Innu no longer want to know anything about the priests.

"But that doesn't mean that ..." -- her sister finished her sentence -- "that they should all be put in the same basket."

"It is an opportunity -- while political and social issues are being played out -- to have a spiritual approach that allows for integration. Through the jolts of history, keeping a connection as we do in the sanctuary can be helpful in finding truth, finding paths to reconciliation, and seeing how we still move forward," he said.

Both white and Indigenous Christians are busy "looking for the paths of possibility," he added. "And St. Anne's is a place of possibility."