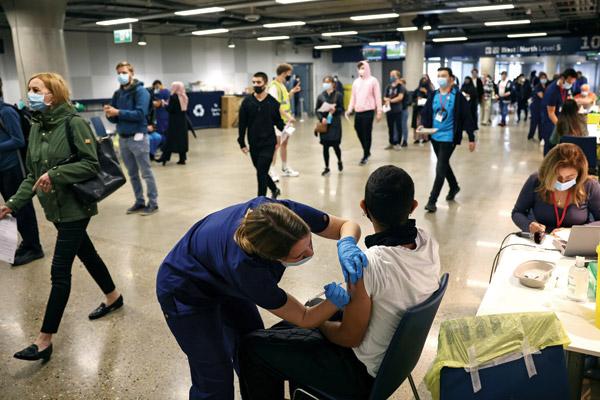 MIAMI -- Following the sudden collapse of a multistory building with people trapped inside, Catholics around South Florida have fled to a common refuge: the comforting presence of Mary.

VATICAN CITY -- The discovery of vaccines is "one of the greatest achievements of modern medicine," but the global community is facing the dual challenges of giving everyone access to them and overcoming "vaccine hesitancy," especially when it is based on false information, said the Pontifical Academy for Life and the World Medical Association.

Humans are very good at excuses and the blame game: I sin because everyone is doing it. I get angry and retaliate, but it’s because of what someone else said or did. Most famously of all, “the devil made me do it.” (Understanding our Church, Seeds of Faith)

What is the biggest lesson you’ve learned at your school?

“... It wasn’t until eighth grade when I heard about the passing of a fellow classmate that I learned the most important lessons. At the time, everyone was in pain and …" (Youthspeak, Seeds of Faith)

Q. Some of my fondest memories of parenthood include attending, in the 1960s, Mass and a breakfast meeting afterward with my four sons that was sponsored by an organization called the Holy Name Society. … Does such an organization still exist; and if not, what caused its demise? (Question Corner, Seeds of Faith)

The House of Grass and Sky: The place that shapes us

Every house, in its own way, is a living thing. It changes as we change. It expands with joy and contracts under duress. (Columns)

A bewildering fear of eucharistic consistency

In recent weeks and months, the phrase "eucharistic coherence" or "eucharistic consistency" has risen almost to common parlance in Catholic circles and in Catholic media. The phrase has most frequently been connected to a forthcoming document — recently approved for drafting by 75 percent of the U.S. bishops — centered on "the meaning of the Eucharist in the life of the Church." (Guest Commentary)

Halt to death penalty is just the first step

As states and the federal government look at what is wrong with the criminal justice system, putting a stop to executions — at least temporarily — should be at the top of their list. If the system is broken, capital punishment is one of the most significant pieces that need to be addressed. (Editorial)