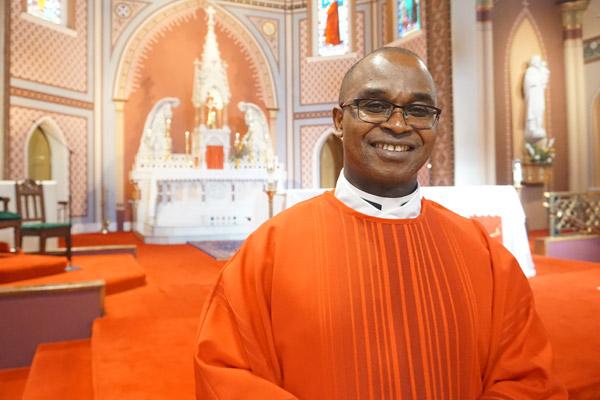 Around 5 years old, James Ibeh would gently rest his hands on anyone to pray for them.

“My favorite verse in the Bible is when Jeremiah said, ‘before I formed your mother's womb, I called you.’ I used that because even as a child, my cousins were calling me ‘Father,’” Father Ibeh said. “... I used to (tell) people, ‘I came to the seminary to get licensed.’”

Father Ibeh, CSSp, associate pastor in five parishes in eastern Arkansas, will celebrate his 25th jubilee Aug. 10. His innate connection to the divine from the start was formed like a diamond, enduring traumas that would leave most feeling hopeless but instead sparked something beautiful for him.

The youngest of eight children growing up in eastern Nigeria, Father Ibeh, 55, grew up being “loved and cherished,” but against the backdrop of turmoil. When he was just 1 year old, the Nigerian civil war erupted in 1967, lasting three years. Memories of running from danger with his parents, camouflaging roofs to avoid air raids and learning not to cry when hiding shaped his devotion to peace.

“I look at it from the point of view that I have a scar on my body, but that scar is a sign of healing,” Father Ibeh said. “... Why I say that is because I know that some people didn't make it. That I'm able to be here and talk about it is a sign of God's grace. And also, another advantage it has given me is to be able to walk through life strong, determined to endure and to go through difficulties. And knowing in all these situations, I am not alone.”

At 17, Father Ibeh developed an umbilical hernia and an incisional hernia. Before his second risky surgery, Father Ibeh told the doctors, “Let us pray first.” After his surgery, he spoke with a healthy, wealthy man about to have the same surgery. That man died.

“I went out and looked into the air, to the sky, tears all over my eyes, and I said I think (that) God has intervened in my life to save me,” Father Ibeh said. “And that’s when the idea of the priesthood became very, very insistent.”

One evening following the surgery, “I don’t know what happened, I can’t explain it,” Father Ibeh began singing and dancing in praise of God for more than six hours.

While staying with his sister, he met Father Damien Nwanyia, a Spiritan priest.

Father Ibeh received a degree in accounting and spent 21 years in finance, serving locally and worldwide for the Holy Ghost Fathers.

In 2017, Father Ibeh came to the United States for the first time  and was assigned as associate pastor of St. Andrew Church in Marianna, St. Francis of Assisi Church in Forrest City, St. John the Baptist Church in Brinkley, St. Mary Church in Helena and St. Mary of the Lake Church in Horseshoe Lake. He finds joy in working with his parishioners and celebrating Mass, no matter how small the crowd.

“No, no, no, don't cancel Mass. If I see one person. I will come,” he said when one of the mission parishes suggested canceling Masses for low attendance in the summer. “... Jesus left 99 for the sake of one. So in the ministry, numbers do not matter. If it's one soul, it's as important as the entire world. So that's what gives the joy.”

Throughout his 25 years of priestly life, Father Ibeh said he rejoices in his unworthiness, that God chose him.

“There is a joy in the ministry that you wake up, you find yourself in your car, you move. Before you know it, a day has passed, a week has passed, a month has passed, a year has passed, and you still have the zeal; that's good,” Father Ibeh said.

Luke’s Gospel not only biography but inspiration