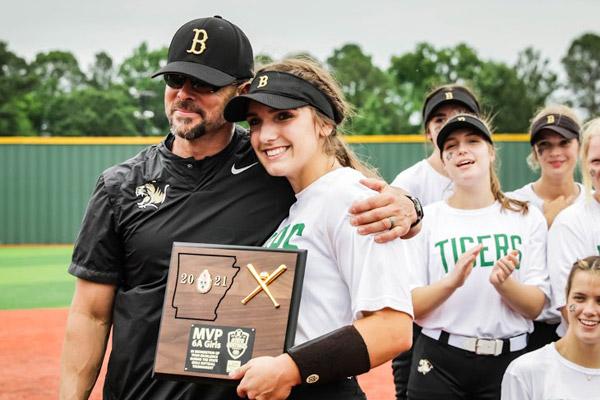 BENTONVILLE -- For as long as she can remember, Emily Perry has loved playing ball. She recalls watching her dad throwing a ball to her brother Andrew when he first started playing tee-ball.

“I would be out in the front yard, yelling to my Dad, ‘Throw it to me, throw it to me!’” Perry said.

More than a decade later, Perry has continued to play softball through club teams and high school. The 5-foot, 5-inch senior infielder of Bentonville High School said she had played every position over the years.

“I have even played pitcher a couple of times,” she said with a laugh.

The experience has proved beneficial for Perry, as she was recently given the most prestigious award in high school sports. On June 18, Perry was named the 2020-2021 Gatorade Arkansas Softball Player of the Year. The program recognizes the nation’s most outstanding high school student athletes.

Over the years she has excelled in other sports, including basketball and volleyball, but softball was her first love. For the past four years Perry focused primarily on softball at BHS, playing on second base and spending some time at shortstop. The pandemic did throw a curveball into her high school career.

“We had practices during COVID, “ she said about the spring of 2020, “but then we had one tournament, and the season was canceled. It was really sad but also frustrating after we had practiced so hard.”

Perry said her team stayed focused on winning the conference this past school year, making it to the state tournament and finally, winning the state title.

On May 21, the Bentonville Tigers won the 6A state softball tournament in Benton. They beat out Bryant 12-1 and then shut out Conway 3-0 in a no-hitter. Perry started the game with a home run, as she had done in four other games that season.

The sweet ending to winning the state title came when Perry was named Most Valuable Player at the tournament. She finished her season leading the Tigers to a 29-3 record and the state title. She posted a .490 batting average with 10 home runs, 49 RBIs, 14 stolen bases and a .950 slugging percentage. She struck out only twice the entire season.

“It was bittersweet for me,” she said, “I was sad that I would not be playing with this team any more; we were all so close and I have never played on a team where the other person had your back. Credit goes to the team and our coach, Kent Early. We were all playing for each other and something bigger than ourselves.”

David Little, Fort Smith Northside High School head coach, said, “When we played against Emily Perry, we tried pitching her different ways and different locations, all to no avail. She is a dominant player at the plate. We never got her out. She is a very good second baseman as well.”

“I wasn’t sure if I wanted to play in college,” Perry said, “but I went to three of the camps during the summer following my sophomore year and did pretty well.”

Later that fall, as a junior, she was asked to make an unofficial visit at UCA and then was offered a National Letter of Intent to play softball on scholarship.

“UCA was the only college that I wanted to attend,” she said, “so I was really excited.”

Perry’s fighting spirit has helped her in other aspects of her life. As an eighth-grader at St. Vincent de Paul School in Rogers, Perry was diagnosed with diabetes. At first, she saw the diagnosis as a weakness.

“I was in denial for a long time because I thought it would affect my everyday life and how I played, but I have learned how to work through the challenges and managing it, and that has made me stronger. I have learned I just have to embrace it,” she said.

Perry credits her Catholic faith and her continued involvement in the Church with helping her meet her daily challenges. Before attending BHS, she attended St. Vincent de Paul School from kindergarten to eighth grade, is a vocalist in the Life Teen band, serves as an usher for Masses, and helps run the Powerpoint during Masses.

Through Gatorade’s marketing platform, “Play It Forward,” Perry was awarded a $1,000 grant to a local or national youth sports organization of her choosing. She chose to award it to the Bentonville Parks and Recreation softball program.

“Faith has always been a part of my life and a part of playing my sport,” she said. “Before going up to bat, I always give glory to God. The awards I have been receiving? I am reminded that you can’t really do anything without the people around you or the God above you.”