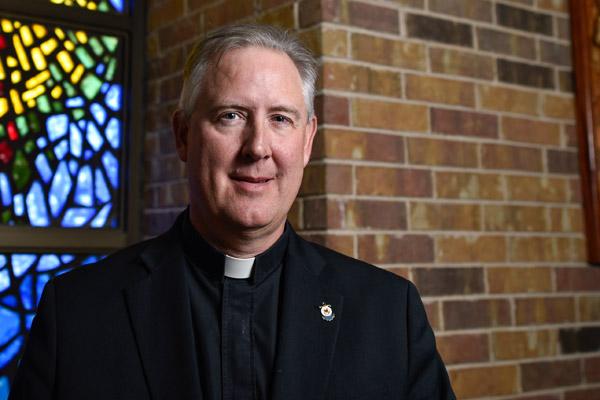 Ben Torres, North Texas Catholic
Father Eric Groner, SVD, is seen at his former parish, St. Rita in Fort Worth, Texas, Nov. 15, 2019. He moved to Arkansas in 2020 to serve as pastor of St. Peter Church and St. Raphael Church in Pine Bluff and St. Justin Church in Star City.

Ben Torres, North Texas Catholic
Father Eric Groner, SVD, is seen at his former parish, St. Rita in Fort Worth, Texas, Nov. 15, 2019. He moved to Arkansas in 2020 to serve as pastor of St. Peter Church and St. Raphael Church in Pine Bluff and St. Justin Church in Star City.

A 12-year-old Boy Scout was on a Catholic camping retreat on the grounds of the Shrine of Our Lady of Sorrows in Starkenburg, Mo.

He signed up for a 2-to-3-a.m. shift during the all-night Adoration of the Most Blessed Sacrament in the chapel but wound up staying until after 5.

“Picture yourself there by yourself, in the middle of the night,” he recalled. “You’re tired, but what a tremendous experience.”

That long sleepless night was a spiritual awakening.

“God kind of planted in my head from that time forward that maybe he’s calling me to be a priest,” said Father Eric Groner, SVD.

The Jefferson City, Mo., native is celebrating his 25th jubilee as a priest of the Society of the Divine Word. Father Groner came to Arkansas last August to serve as pastor of St. Peter Church and St. Raphael Church in Pine Bluff and St. Justin Church in Star City.

“I am so grateful for all the people I’ve gotten to know and all the opportunities I’ve been given,” he said. “I am grateful to be alive and well and in God’s service.”

Father Groner, the second of five children, has 13 priests in his extended family, and many cousins and great-aunts became religious sisters.

Historically in the U.S., the Society of the Divine Word was charged with ministering to poor African Americans, mostly in isolated rural locales.

“Most of our parishes are African American or multicultural,” he noted in an April 15 interview. “My current parish is about 80 to 90 percent Hispanic. That’s kind of our mission field for today.”

Father Groner professed first vows on Aug. 18, 1990, and perpetual vows on Sept. 16, 1995. On March 23, 1996, in Techny, Ill., Auxiliary Bishop Curtis Guillory of Galveston-Houston, also a member of the Society of the Divine Word, ordained him to the priesthood.

Father Groner said he believes the variety of his priestly assignments has helped him appreciate the Church’s universal nature. He was first sent to El Banco, a town in northeastern Colombia, while the country was engulfed in a 50-year civil war.

“You had five major drug families fighting for territory, and you had socialists and communists waging war against each other,” he said. “It was very dangerous to be at the wrong place at the wrong time.”

Called back to the United States, he ministered in Louisiana, Mississippi, Texas and New Jersey. He is chaplain for religious activities of the National Catholic Committee on Scouting and a chaplain of the Apostleship of the Sea, serving on 21 ocean cruises all over the world.

“On a boat, you’re the chaplain and not just the Catholic chaplain,” Father Groner said, explaining a call to a stateroom can mean someone has died or is seriously ill and they’re sending for a helicopter. “You’re out at sea, but your job is just like it would be for a parishioner. You take care of their pastoral needs. That can mean anointing the person and comforting the family.”

During one cruise in 2017, the ship stayed out because of winds from Hurricane Ophelia. With churning waves rocking the boat, the Sunday crowd of 100 people grew to 500 for the daily service.

“They say there’s no atheist in a foxhole. Well, I guess there aren’t any atheists on a cruise ship in a hurricane either,” he added with a light-hearted chuckle.

His transition to Arkansas in August was a bit of a culture shock, as the Dallas-Fort Worth area has 8.2 million people and Arkansas about 3 million. Not to mention he arrived during a pandemic.

“Most of our parishioners caught COVID last January and thought it was the flu,” he said.

Father Groner is looking forward to resuming a full slate of ministries, including a soup kitchen near St. Peter Church. Confident that the Lord will continue to provide in his own time and way, Father Groner is content to do his best and not sweat the rest.

“You have to enjoy the time you get,” he said. “Don’t take life too seriously.”

This article was condensed from an article written for The Catholic Missourian. Used by permission. Information was also taken from a 2020 article in North Texas Catholic.