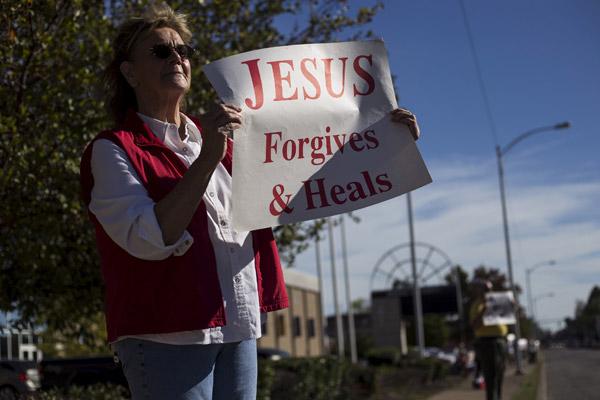 CNS photo/Brittany Greeson, Reuters
In this 2015 file photo, a woman in Owensboro, Ky., holds a placard during a demonstration against abortion.

CNS photo/Brittany Greeson, Reuters
In this 2015 file photo, a woman in Owensboro, Ky., holds a placard during a demonstration against abortion.

WASHINGTON -- The Supreme Court announced it will hear oral arguments Oct. 12 in a case from Kentucky's attorney general, who is defending the state's abortion law that was struck down by a lower court.

Last year, a three-judge panel of the 6th U.S. Circuit Court of Appeals, based in Ohio, upheld this decision.

The issue before the nation's high court is whether the state's attorney general, Daniel Cameron, a Republican who began his term in 2019, can weigh in on this abortion law. He asked the full 6th Circuit to reexamine the three-judge panel's ruling.

The appeals court rejected his case, saying he was too late with it, so he brought it to the Supreme Court.

In late March, the court agreed to take this case and on July 14 it assigned the date for the arguments. The court has not yet announced if it will meet in person in the new term, which starts Oct. 4.

The Kentucky case has the backing of a coalition of 20 state attorneys general, led by Arizona Attorney General Mark Brnovich, also a Republican, who filed an amicus brief with the Supreme Court in support of Cameron's ability to defend Kentucky's abortion ban.

In his appeal to the Supreme Court, Cameron said the 6th Circuit's refusal to let him defend the law prevented him from doing his job. He also argued that another appeals court, the 9th U.S. Circuit Court of Appeals, in California, allowed state attorneys general to intervene in cases in later stages of litigation.

Kentucky's current governor, Democrat Andy Beshear, had been the state's attorney general from 2015 to 2019. He stressed he would not challenge court decisions on the state's abortion law and also pledged during his gubernatorial campaign that he would not defend abortion laws he considered unconstitutional.

In a statement issued the day the court said it would look at his involvement in the case, Cameron said: "I promised Kentuckians that I would defend our laws all the way to the United States Supreme Court."

He said the state's abortion law "reflects the conscience of Kentucky by banning the gruesome practice of live dismemberment abortions," and he added it is important that "Kentuckians have a voice before our nation's highest court. I was elected to provide that voice, and we look forward to making our case to the Supreme Court."

In the court's brief order March 29, it turned down the attorney general's request for the court to send Kentucky's abortion case back to the lower courts based on the Supreme Court's decision last year in June Medical Services v. Russo, which struck down a Louisiana law requiring doctors who perform abortions to have the right to admit patients at a nearby hospital.

Cameron argued that the 6th Circuit made its decision just before the Supreme Court's decision.

In the court's upcoming term, it also will hear an appeal from Mississippi to keep its ban on abortions after 15 weeks of pregnancy. The ban was struck down by a U.S. District Court in Mississippi in 2018 and upheld a year later by the New Orleans-based U.S. Court of Appeals for the 5th Circuit.

If the court sides with Mississippi, it would be the first time the Supreme Court would allow an abortion ban before the point of viability and could lay the groundwork for other abortion restrictions which other states could follow or it could push states to enact more abortion restrictions.

"Viability" is when a fetus is said to be able to survive on its own. The high court has consistently ruled states cannot restrict abortion before the 24-week mark.