Look to the crucifix, Jesus' example for understanding forgiveness better 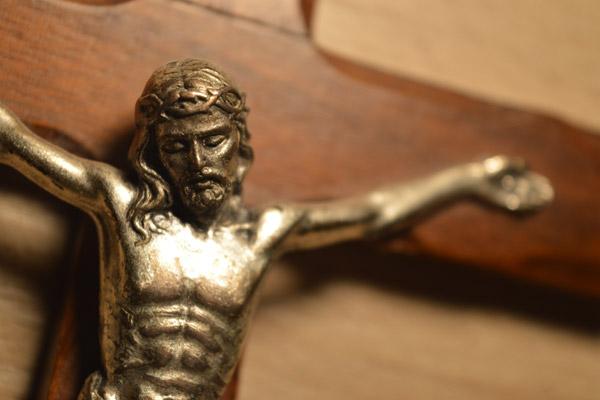 Humans are given choices and can choose to forgive. While there is no such thing as forgive and forget, there is mercy, priests said.

The story of humanity is one of forgiveness, from Adam and Eve in the Garden of Eden to the terrified apostles receiving Jesus’ message of peace rather than condemnation after their betrayal at the crucifixion.

“We say, ‘to forgive and forget.’ I’m like no; we're human beings. It's impossible probably for us to forget completely. And I don't recall Jesus ever saying ‘forgive and forget’ anywhere. He says forgive, doesn't say forget,” said spiritual director Father Mark Wood. “In fact, the cool thing is, we're called, in a sense, to remember and to forgive the person we’re remembering, not forgetting. That's actually a higher form of forgiveness and a higher form of love.”

In the brokenness of the world, people are given the chance to forgive others daily. But the process of forgiveness is different for every person.

How often must I forgive? 77 times

In a 2018 column, author Father Ronald Rolheiser called forgiveness the “the greatest miracle,” inextricably linked with the resurrection.

“The message of the resurrection is that a dead body can be raised again from its grave. But this isn’t just true for our physical bodies, which die, but it’s also true, especially, for hearts that are frozen and dead from disappointment, bitterness, anger, separation and hatred,” he wrote. “The miracle of the resurrection is as much about raising deadened souls to new life as it is about raising dead bodies to new life.”

Father Andrew Hart, pastor of Holy Rosary Church in Stuttgart and Holy Trinity Church in England, and chaplain for Calix Society, which ministers to those with addictions, pointed to the crucifix for understanding forgiveness. It is not just an emotion, it is a choice. In Luke 23:34, Jesus prays from the cross, “Father, forgive them, they know not what they do.”

“Every time we forgive, we are, in a certain sense, calling to mind again the sacrifice of Christ on the cross and trying to strive to imitate that model. So I don't think forgiveness is something we can fully accomplish without God's help. It’s something that needs grace,” Father Hart said.

Forgiveness is shared throughout the Bible, notably in the popular Gospel stories of the Samaritan woman, the prodigal son and St. Peter in his denial of Christ and Jesus’ later response of “Do you love me?” In Matthew 18:21-22, Jesus tells Peter to forgive “not seven times but 77 times.” It is why those who sin, who have found reconciliation with God but have yet to forgive themselves, need to go to Mass and Communion, no matter how unworthy they may feel.

“Jesus after his resurrection could have said, ‘OK, those 12 guys didn't work out so well so I'm going to get me 12 whole new disciples.’ I love the fact he went back to the exact same guys and said, ‘OK guys, I know everything you did, the good and the bad, I still want you. I don't give up on you,’”said Father Wood, pastor of St. Theresa Church in Little Rock.

Forgiveness is the idea of finding peace within ourselves through God’s grace. It means to not wish any ill-will on the person who perpetrated the wrong, wanting instead to see that person be “as close to God as possible,” Father Wood said. Allowing bitterness, resentment and unforgiveness to fester inside blocks us from God. Father Wood said one of the best definitions of the Holy Trinity is a conduit, constantly giving and receiving love. Unforgiveness can break the flow, giving control to that other person, rather than to God.

“It's like I’m closed to God and the whole world in some way,” Father Wood said. “So I'm not going to be fully open to God and all of God's blessings in God's grace. Really, that's why it's often said, but I believe it's true -- if I refuse to forgive somebody, really, I’m hurting myself.”

However, it never means to excuse the injustice, or to continue a relationship with a person who is harmful, whether it be emotionally or physically.

“They have an obligation to protect themselves and their loved ones.I don't think God would expect them to put themselves in harm's way or in proximity of danger with somebody (that’s) an abuser, whether it's a sexual abuser or physical abuser, or anything like that,” Father Wood said. “But I think you can still be at peace and to me that's one of the things that Jesus enables us to do. That's part of the message of the cross I think. One of the best sayings or expressions I've heard was, ‘Faith enables us, Jesus enables us, to learn to live with what is unlivable.’”

In “Everything Belongs,” author Father Richard Rohr explains how forgiveness is not logical, but the final breakdown of logic.

"In the spiritual life, nothing goes away. There is no heavenly garbage dump. It's all here, wherever we are. Everything belongs,” he wrote. “Even forgiveness does not mean it goes away. It means we forgive it for being there, nothing more. Even our demons do not go away. As Robert Bly wisely said: ‘You don't get rid of demons, you just educate them.’”

While someone might experience that release, an inner peace once they have decided to forgive, it does not mean a person will not be triggered by a gamut of feelings from time to time. Like a chronic illness, forgiveness and the scars from betrayal are something to be managed. Some days, the pain may be overwhelming.

“It's a wound we may carry all of our life, and I think it does nobody any good service to say, ‘Oh well you're going to get over it.’ You know we use those expressions, I hate them. ‘It's God's will, God has a plan.’ I hate all that stuff,” Father Wood said. “So to me, it's most important to be just very honest and say, ‘OK, this was not right what happened to you.’ And it's like you now have this wound. And I think it helps people to see it that way.”

Each person’s journey to forgiveness is unique and there’s no timeline. Even if a person is not ready to forgive at that moment, a willingness and choice to walk down the road that will eventually lead to forgiveness is key. Actively asking God to help see that person as he sees them can give people a new perspective.

“Sometimes I talk with people who (say), ‘Father, I just can't seem to forgive this person’ and I say whenever you have trouble forgiving someone, look at the crucifix. You see there God's infinite mercy and forgiveness toward you, for the sins that you've committed. Even if you were the only person in the history of the world who would have sinned, God would still be forgiving you through Jesus,” Father Hart said. “... Forgiveness is a process, sometimes it's a multi-step process. You have to forgive, and then you have to come back and you have to forgive again and you have to maybe forgive again a third time and you continue to do it until it becomes a decision or a choice that just has become second nature.”

Ask to be forgiven

Asking someone for forgiveness can be just as tough. Father Wood explained as a young priest, he rushed to the hospital in the middle of the night, grumpy and tired, to meet the wife of a dying man who needed the anointing of the sick.

The two wound up on good terms, even celebrating the funeral, but Father Wood said the larger lesson is the healing that takes place when facing reality.

“Everything about Jesus I love because he’s so totally honest, he doesn't play games or pretend. He's very honest about the reality of life. And that's the way I think we have to be with forgiveness,” Father Wood said. “It doesn't happen by ignoring things or pretending it didn't happen. Neither does it happen by getting revenge or bitterness. It's learning to live in peace with it.”