Holding onto your unforgiveness is not mentally or physically healthy 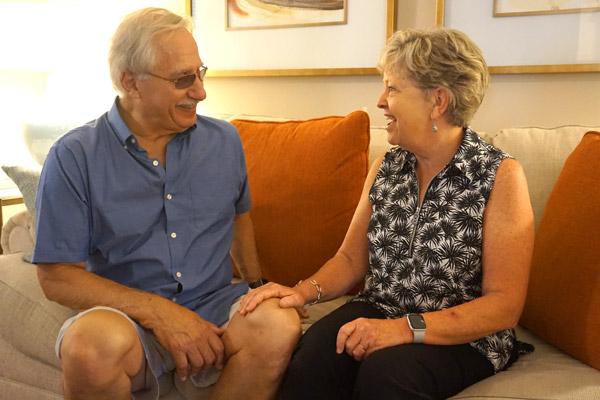 Forgiving a person does not mean exonerating or excusing the wrong they have  done, according to clinical psychologists Drs. George and Sherry Simon of Little Rock.

“In order to free yourself, you've got to find ways, and I hope that's what we help people do, of getting out of the prison of these thoughts that keep you in the past and keep you back there in the middle of the trauma, so that you can come to the present moment, which is where we're all trying to be,” she said.

Here are some ways to walk the path of forgiveness:

It might be that pain in the pit of your stomach that won’t go away. Or the vitriol spewed at an unsuspecting but admittedly slow-moving cashier. Maybe it’s why it’s hard to walk through the doors of a church.

Forgiveness and our willingness to give it is an intangible human experience with lasting consequences on physical, mental and spiritual well being. Clinical psychologists George and Sherry Simon, parishioners at Christ the King Church in Little Rock, explained how figuring out a way toward the path of forgiveness is universal.

“I think it's letting go of the hold that any kind of traumatic event can have on you. I think Jesus when he was talking about … those folks that might destroy the faith of the little ones, he used some pretty harsh language. He said it'd be better if a millstone were tied around their neck, maybe drowned in the depths of the sea. That's pretty strong. Breaches of trust and invitations to lose faith, especially to lose faith in God, is really the weight that sin has,” George Simon said. “So I think what he was trying to say is that it puts a yoke around us. And I think really that's what he was trying to say about those folks who are instruments of causing people to lose faith, that it would be better if they were yoked.”

The triad of pain

Sherry Simon said a traumatic event, no matter how major or minor, “infects the victim” leaving them a prisoner to cope with the fallouts, as well as the burden to one day face the reality of forgiveness. In therapy, she said most clients seek help for a present-day issue, but past trauma can impact the lens by which a person lives or experiences the world.

“I don't particularly know anybody who hasn't experienced some form, level, maybe not horror, but some level of trauma,” Sherry Simon said. “... It's a tough world and the Spirit inside of all of us, especially as children, is so bright and so beautiful, but man coming into this world is difficult.”

Some of the pitfalls of holding onto unforgiveness include:

“People can actually keep company with their old wounds in a way that gives them a sense of control: ‘Nobody can take this from me.’ And yet, it's a bitter pill, it’s morbid,” George Simon said. “And we've known all too many people who are just not willing yet to release themselves from the prison of it.”

“We talk about the negative triad, the negative view of the world, the future and yourself and of others. It becomes your filter,” he said.

While a person can take steps in their life to reach a point of forgiveness (see sidebar), it’s never just “forgive and forget.”

“You can never undo it,” George Simon said. “Richard Rohr is famous for saying how difficult it is, but how redeeming it is, and how releasing it is too, to sit really with that pain, in the tension and process it. And not basically try to undo it, but allow it to instruct you. So many folks that we know will repeat the same kinds of behaviors that in some trauma is totally uninvited.”

Sherry Simon said it is called “repetition compulsion,” unconsciously setting up the same condition for the same trauma. For example, marrying the same type of individual and ending up in divorce multiple times.

Although it might become easier to forgive a spouse for leaving a used towel on the floor for the 100th time, it’s harder to forgive someone for a deeper betrayal.

The Diocese of Little Rock has a victim assistance coordinator that are the first line of communication when a person calls to report abuse by a priest or church employee, giving referrals for help and making sure a person is heard by the Church. The Simons served together in that role for eight years.

George Simon said while there are many traumas that can shake a person’s faith, when it’s inflicted by someone who “purports to speak for God, to represent God,” whether it be physical or emotional abuse, it can cause a crisis of faith. Forgiveness then can be a long process, one that Sherry Simon said should not start off with “God says you need to forgive them.”

“It’s to allow them in a safe space to have their pain, to be able to say their pain and to sit with them in it, knowing that you can't make it go away, but you can sit with them in it. And as they continue to realize and share with you how they keep being drawn back into it and drawn back into it, and can't even go to church because they can't be around all of those triggers of their pain,” Sherry Simon said. “Over time, what I found is people start asking the question, ‘How do I come out of this?’ And to me, when they ask the question, ‘How do I stop living this way,’ then you can broach the subject of, ‘You have to work towards finding a way to let go of the pain.’ And that's forgiveness; it isn't exoneration. And it isn't no limits. It's letting go of the poison that has been injected into your body.”

Forgiving a person does not mean exonerating or excusing the wrong they have  done, according to clinical psychologists Drs. George and Sherry Simon of Little Rock.

“In order to free yourself, you've got to find ways, and I hope that's what we help people do, of getting out of the prison of these thoughts that keep you in the past and keep you back there in the middle of the trauma, so that you can come to the present moment, which is where we're all trying to be,” she said.

Here are some ways to walk the path of forgiveness: