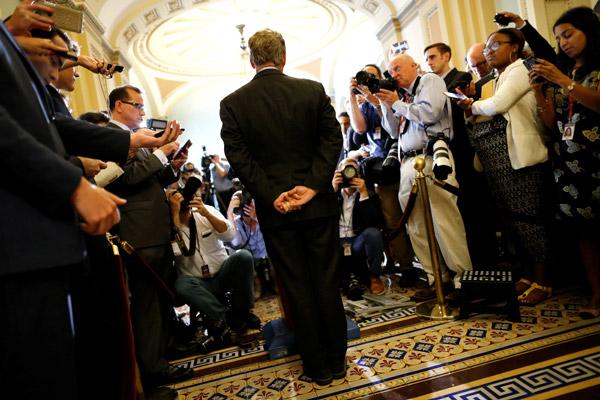 BETHESDA, Md. -- For all the positive energy and enthusiasm at the Stone Ridge School of the Sacred Heart July 19, it wouldn't be a surprise if Olympic-bound swimmers and alumnae, Katie Ledecky and Phoebe Bacon, could hear the exuberant cheers and applause all the way from Tokyo.

High-tech data collection and cellphone tracking services allegedly used in a report by The Pillar that triggered the resignation of a high-ranking U.S. Catholic official July 20 has sparked a fresh discussion about journalism ethics.

WASHINGTON (CNS) — The president of the U.S. Conference of Catholic Bishops and the chairman of the USCCB's international policy committee expressed their solidarity and that of all the U.S. bishops "with our brothers in the Cuban episcopate, and with all men and women of goodwill in Cuba."

WASHINGTON — The bishops who head the El Paso and Dallas dioceses in Texas have asked Gov. Greg Abbott to halt an order that could result in shutting down, by the end of August, Catholic Charities facilities in Texas that care for foster and migrant children, saying that doing so violates state laws protecting religious freedom.

What happens to kids when ex remarries?

Q. I recently learned that my ex-wife is going to remarry in a ceremony to be officiated by her sister, who is a minister of the Universal Life Church. If we became one during our Catholic marriage ceremony, were later divorced and the marriage was never annulled by the Church, how will this affect our chances for paradise and what scandal is brought about by this type of behavior? (Question Corner, Seeds of Faith)

Uprooting the weeds in our spiritual life

I recently became a first-time homeowner. After renting for nearly three decades, I have immediately recognized the blessings of this status change. (Columns)

Supreme Court should see it’s time for Roe vs. Wade to go

I'm looking at a helpless but calm-looking baby, 16 weeks old, resting with eyes closed and one hand next to his or her face. The baby is surrounded by a thin membrane and floating next to the umbilical cord providing oxygen and nourishment. (Columns)

Give elderly care and attention they deserve

Have you called or prayed for your grandparents lately? How about visiting your elderly neighbor? The first World Day for Grandparents and the Elderly, July 25, marked the perfect opportunity to reach out to the aging individuals in your life in a special way that reassures them of your love and care. (Opinions, Guest Commentary)

We need some courageous legislators at the U.S. Capitol to fix our broken immigration system. The Immigration Reform and Control Act passed in 1986; now 35 years later, we need our elected leaders to be heroic and do what is right once again. (Editorial)