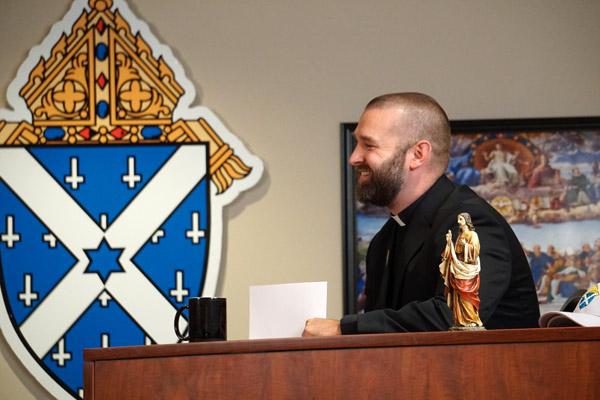 Click here to read about the virtual Taste of Faith event for seminarian education and how you can watch it.

Before Father Jeff Hebert’s priestly ordination in 2018, he was clear about what kind of priest he wanted to be for God’s people -- “a priest who has the smell of the sheep.”

While he had served only as an associate pastor at St. Joseph Church in Conway before Bishop Anthony B. Taylor assigned him to the role of assistant vocations director and prefect of the House of Formation in June 2020, Father Hebert said the parish and all the people he ministers to are always in his mind when he works with young men.

“It's really the thing I'm trying to get these young men to understand and to conform their hearts to the heart of Christ that smells like the sheep, because I actually have the sheep in mind,” Father Hebert said. “And so that's really helped me to kind of guide that and to really reconcile the ministry that I have now as opposed to being in a parish or in parish ministry is that I still have the parish in mind. There's no point in forming these guys to be a theoretical priest.”

It’s the mentality he believes Msgr. Scott Friend felt throughout his 16 years at the helm of the vocations office. Msgr. Friend grew vocations throughout his tenure, with 44 priests ordained, 24 more in formation and the construction of the House of Formation, where seminarians and discerners live and study. Msgr. Friend is now pastor of Blessed Sacrament Church in Jonesboro.

While it’s hard to nail down just one lesson learned from Msgr. Friend, Father Hebert said it’s the understanding of the role in helping the diocese as a whole.

“Really understanding vocations as a sign of God's love for us but also as a reason for the people to continue to believe, and just kind of seeing how that fits into the greater proclamation of the kingdom of God. It's been really cool for me,” Father Hebert said.

One of 11 children who grew up in the suburbs of Houston, Father Hebert studied for four years at the Pontifical North American College in Rome. He said the experience was an important one, from being in close contact with the history of Christianity and to the saints and getting a glimpse of Church politics, which he said he never wants to get caught up in.

As vocations director, Father Hebert wants to carry out some of Msgr. Friend’s visions, including visiting parishes and schools outside of Central Arkansas to talk more about vocations. He also hopes to see discernment groups at different parts of the state for young men.

“I think what society needs in priests today, above all, they are men of faith. And I don't mean that in the cliche, just like prayerful men. Men who actually believe the things they're proclaiming from the pulpit,” he said. “Men who actually believe that the source and the summit, the highest thing we do is the celebration of the Eucharist, the communal celebration. I think men who believe truly what the Gospel revealed. More than anything, rather than being political and someone who really likes this aspect of things or this aspect, just men who actually believe it's not about what we do. It's really about handing on the message of Jesus Christ in the way and the tradition he has left us.”

Father Hebert said his role is not to choose the future priests but to guide them in God’s will. Lay Catholics planting seeds in the minds of young men who they think would be good priests can be life-changing. In his own vocation story, a woman he had never met put her hand on his shoulder and said, “You’re going to be a priest someday.”

“She just smiled and then left. And that was the thing that opened me up. I actually considered it for the very first time when she did that. So I highly encourage that. I hope everyone out there is just telling every young man they see, ‘Oh, you'd be a good priest,’ ‘Oh, you'd be a good priest,’” he said, laughing. “But that's what I'd say: prayer, and then not being afraid to go encourage young men that they think would be good priests. To go tell him just that.”

Click here to read about the virtual Taste of Faith event for seminarian education and how you can watch it.