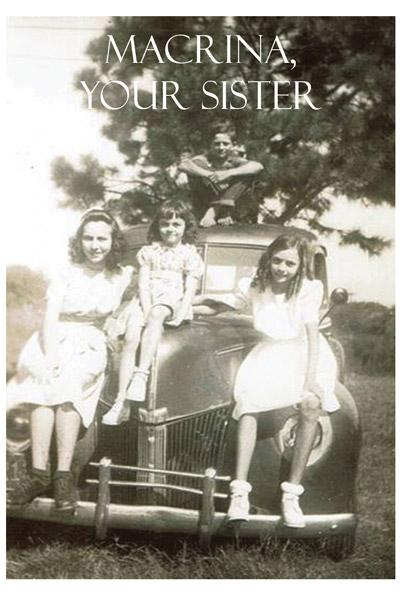 Courtesy St. Scholastica Monastery
The cover of “Macrina, Your Sister” shows four of the Wiederkehr children, Edna May (left), Martha Ann (Sister Macrina) and Mary Lou on car hood and Clarence (Basil) on car roof in Altus in the mid-40s. Published July 28, the book is a compilation of tributes and reflections on the life of the late Sister Macrina Wiederkehr, OSB.

Courtesy St. Scholastica Monastery
The cover of “Macrina, Your Sister” shows four of the Wiederkehr children, Edna May (left), Martha Ann (Sister Macrina) and Mary Lou on car hood and Clarence (Basil) on car roof in Altus in the mid-40s. Published July 28, the book is a compilation of tributes and reflections on the life of the late Sister Macrina Wiederkehr, OSB.

FORT SMITH — “Macrina, Your Sister,” a collection of memorials, tributes and reflections on the life of the late Sister Macrina Wiederkehr, was released July 28 on what would have been her 82nd birthday.

She died April 24, 2020, “engulfed in the love of the other sisters of St. Scholastica Monastery,” Jennifer Burchett, communications consultant, wrote. Still, the COVID-19 quarantine prevented friends who would have liked to say goodbye from attending her funeral.

“We wanted to give people a tangible memento that they could hold,” said Beth Fritsch, who compiled the book with Kaye Bernard and Sister Macrina’s niece, Rosann Vaughn. “Because we still have not been able to gather for her memorial, we wanted her friends to have closure.”

The book contains Sister Macrina’s journal entries and reflections from “Gold in Your Memories,” published in 1998. The entries show how her growing faith helped her embrace death as a gift. She describes the monster named “sorrow” that devoured her family when her sister Dorothy died and how, in time, she was able to appreciate the joy and sweet sorrow of her memories. In a later poem, she describes death as being breathed back into God and her desire to be breathed back into the heart of the world so that her death will be a birth and a gift. She reflects on the importance of “living awake,” of mindfulness and embracing the joys of life until the very last moment.

The youngest of eight children, Sister Macrina grew up on a farm in Altus and yearned for the privacy to write and dream. She found it in a cornfield where she swept up a little space and made it her room. There she read children’s classics and wrote her deepest feelings on corn leaves, burying them at the base of the stalks, knowing they would become feed for the cattle when autumn came.

After entering St. Scholastica Monastery, she found her writing space within the Liturgy of the Hours and the silent pauses during the day. Her monastic roots kept her grounded and focused as she traveled across the United States and internationally to give retreats.

After her death, the monastery received notes from around the world expressing gratitude for Sister Macrina’s wisdom. Her three surviving siblings shared stories from her fun-loving, nature-loving childhood. Nieces and nephews told stories of trying to combine some family reunion time with her retreats and how difficult it was for talkative Wiederkehrs to abide by her rule of silence. Sister Macrina sometimes invited her nieces and nephews to come to the monastery for a retreat after getting married. Those who accepted her invitation called it the spiritual beginning of their marriages.

Others who paid tribute got to know Sister Macrina through her books and retreats, her spiritual direction and her years of campus ministry. Her writing gave her more opportunities to share her passion for living, observing and appreciating everything in the world around her.

“Macrina was very special to me,” Vaughn said. “We talked usually at least weekly or more often some weeks. She was such a mentor besides being my aunt and like a sister to me. Sometimes I felt like she was my second mother with her advice.”

The most poignant tributes were from those who knew her best, including Sister Joyce Rupp, OSM, co-author of “The Circle of Life,” and Velma Frye, a musician who set many of Macrina’s poems to music.

“2020 was a very tough year to collaborate on anything, much less this dear book,” Fritsch said. “We had a plethora of good material, far more than we could use. … I hope the book is a comfort to her family and friends, a tangible memento which stirs good memories and brings dear Macrina to the reader’s mind and heart. ‘Macrina, Your Sister’ was a labor of love, indeed, meant to be shared Macrina-style with sacred pauses and quiet savoring.”

Fritsch would like to publish more of Sister Macrina’s journals, including samples of her own handwritten musings.

“The sisters of St. Scholastica were happy to collaborate on this book honoring Macrina and felt its importance for those who live outside the monastery walls,” prioress Sister Kimberly Prohaska said. “We did not include many of our thoughts and feelings in the text as we thought it was more important than the book to reflect those who knew her differently.”

Her funeral Mass will be held after the surge of COVID-19 cases decreases.

“We still look forward to celebrating her funeral at the monastery,” the prioress said. “We are delaying her funeral services until it is safe to have more people present.”

“Macrina, Your Sister,” can be purchased at St. Scholastica Monastery Gift Shop, open Monday, Wednesday and Friday from 9 a.m. to noon, and through the monastery’s online gift shop at https://shop.stscho.org/.