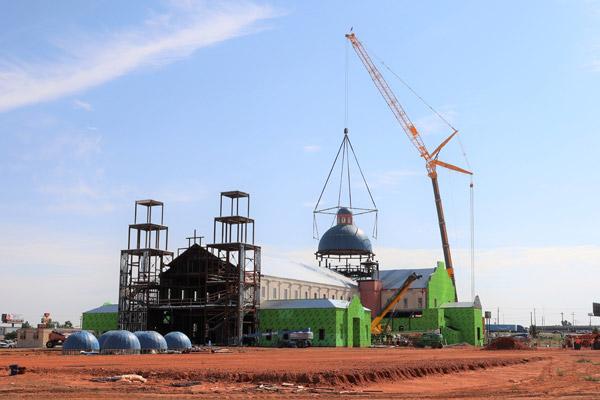 OKLAHOMA CITY (CNS) -- Construction of a shrine honoring an American priest who was killed while serving in Guatemala reached a milestone with the installation of a massive dome.

VATICAN CITY -- The Vatican is investigating about a dozen founders of congregations of consecrated or religious life, and the most common allegations involve abuse of power or conscience, financial corruption or problems associated with "affectivity," said a top official.

‘Master, to whom shall we go?’ Putting ourselves into Scripture

One of my favorite prayer techniques is to read Scripture and then place myself in the scene — first person, present tense. This allows me to explore from within the Word. (Understanding our Church, Seeds of Faith)

How will you change the world?

“I believe at this age, there is normally not a specific response to this loaded question. Instead, at least for me, the only way I know that I can change the world is by being open and willing to any plan God reveals …” (Youthspeak, Seeds of Faith)

Living your best life: Loved ones around you, making an impact on the world

Because I spend so much time in the car, I try to spend it at least somewhat wisely. So I listen to books. (Columns)

All of Wisconsin cheered for the Milwaukee Bucks July 20 as they captured their first NBA title in 50 years, defeating the Phoenix Suns, 105-98. Their star player, Giannis Antetokounmpo, scored 50 points and was named the NBA Finals' Most Valuable Player. (Guest commentary)

It’s time to lift the people of Afghanistan in prayer once again. We had so much hope that the country could be rebuilt into a safe, flourishing nation, but it is now near ruin. (Editorial)