Parishioners invited to take keepsakes from the stone rubble after demolition 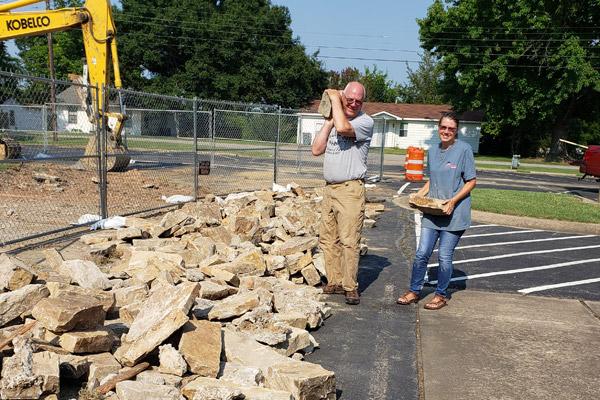 Maryanne Meyerriecks
Debbie and Leo Sharum pick up stones for their garden after Sacred Heart of Mary's old stone school building was torn down July 31 in Barling.

Maryanne Meyerriecks
Debbie and Leo Sharum pick up stones for their garden after Sacred Heart of Mary's old stone school building was torn down July 31 in Barling.

BARLING — Shortly before the old stone house that had been Sacred Heart of Mary School was demolished, Larry Sharum climbed a ladder and removed the stone with the school’s name chiseled into it.

The elementary school, also known as St. Mary’s, was never listed on a historic registry, but it was cherished by students and parishioners as an important part of their heritage.

On July 30-31, the old stone schoolhouse was demolished because of safety concerns that left it unusable.

With fewer religious sisters to staff the school, Sacred Heart of Mary became a preK-first-grade school in 1978, cutting back to preK through kindergarten before closing completely in 1987. If the new parish center was full of parish religious education and meetings, the schoolhouse was used for overflow classes. In the past few years only the Vietnamese Knights of Columbus and the Vietnamese community used the building for meetings and storing the prepared food they sold at Marian Days in Carthage, Mo.

Parishioners were invited last month to pick up some of the stones to use in their home landscaping, and Sharum got the stone with “St. Mary’s 1946” chiseled into it and another, larger stone with a chiseled cross.

“I’d like to have them made into a monument to put on the church grounds,” he said. “It’s part of our history.”

Sacred Heart of Mary Church was established as a mission parish in 1902, served by a visiting priest from Subiaco Abbey. Two sisters from St. Scholastica Monastery opened a school shortly afterward and lived on site.

In 1946 parishioners volunteered to build the stone schoolhouse for $6,322.86. It contained two classrooms, two rooms for the visiting priest and a basement parish hall and cafeteria.

Sister Louise Sharum, OSB, was one of the first sisters assigned to teach in the new building.

“I had just made my temporary vows and was new at teaching when I arrived there in 1950,” she said. “We had two classrooms, the little room and the big room. I taught grades one to four, and Sister Florentine had the big room, grades five to eight. We each had 28 to 30 students.

“We would bring the children to church for Mass on Wednesdays and for the rosary on the other days. What I remember most was the joy of first graders when they could read the first story in their readers on their own. Their little eyes would sparkle and they would laugh if it was a funny story and enjoy it so thoroughly. They all really loved to learn.”

After three years, she moved up to teach the older grades and became the school’s principal until she was transferred in 1955.

“Every once in a while I’d have laryngitis,” Sister Louise said, “and I’d whisper and the little kids would whisper back at me. They were precious children.”

Larry Sharum doesn’t know Sister Louise, although he said “all the Sharums here are related somehow.” He attended St. Mary from 1961-1969, and by then there were only six to eight children in each of the two classrooms.

“I had Sister Dorothy for grades one to four, and Sister Carmelita for grades five to eight,” he said. “They would teach lessons for each grade, and we’d listen to all of them while we worked on our assignments. There was lots of one-on-one, but I was well prepared for high school.”

Despite the differences in age, everyone played well together in the school yard, which had a ball field and playground equipment, Sharum said. The students attended Mass two to three times a week, and Sharum became an altar server, learning the Latin prayers at the foot of the altar.

“We had big chicken-fry fundraisers followed by bingo one Saturday night a month,” Sharum said. “They got so big that we outgrew the basement and had to set up some of the tables outside.”

Families of some of the former students -- Beckers, Siebolds, Sharums and others -- are still members of the parish, and many of the rest stay connected with one another on Facebook.