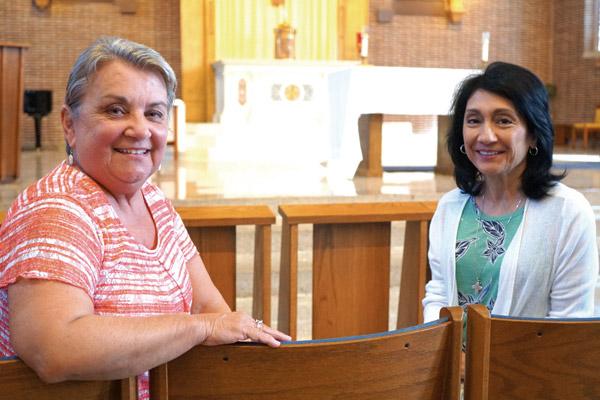 The spiritual bond between Evelyn Hart and Angie Elser has only grown stronger over the years.

The parishioners at Christ the King Church in Little Rock knew each other through school activities with their children, but their friendship blossomed when Elser’s oldest son, Stephen, entered the seminary in 2009.

Hart already had two sons, Andrew and Stephen, in the seminary and offered her insights on having a son studying to become a priest. With their hearts full of compassion (both are nurses) and a deep prayer life, they formed Mothers of Major and Minor Seminarians (MOMMS) in 2009 to unite all diocesan seminarians’ parents in prayer.

“We realized over coffee that our sons needed prayer every day, every day,” Hart said.

“They need prayers, and we don’t know their specific intentions, but God does, and those priests do,” Elser said. “They have many hardships, temptations, and they need to be covered in prayer.”

Once Fathers Andrew Hart, Stephen Hart and Stephen Elser were ordained priests, the mothers were ready to move on to the next phase: prayers for priests. Enter PPOPs, Praying Parents of Priests.

“Our effort is to ask parents of other priests in the state to pray a particular day, a very consecrated prayer,” Hart said.

“They need prayers, and we don’t know their specific intentions, but God does, and those priests do,” Elser said. “They have many hardships, temptations, and they need to be covered in prayer.”

Like MOMMS, the concept is simple. Take one day every week to devote to the day's intention and sacrifices for their pastor and all priests. There is no registration, dues or meetings, just devotions like private prayer, Masses, adoration, rosary and fasting to support men who have given their lives to Christ.

Since MOMMS was founded 12 years ago, Hart and Elser have stayed committed to their weekly devotion. Hart said she prays daily for her sons, but her intentions every Saturday are for all priests. She skips breakfast that day and starts her morning with praying the chaplet and rosary.

“I pray for perseverance in their everyday struggles and a joy-filled heart of service, the grace of that. They need copious amounts of grace to just meet the challenges,” she said.

Elser makes sure to attend daily Mass every Friday with a special focus on PPOPs’ patron saint, the Sacred Heart of Jesus.

“I pray for my son for his love for God’s people, to see Christ in every single person and to love as Jesus loves them,” she said.

After getting support from Bishop Anthony B. Taylor and former vocations director Msgr. Scott Friend, the two asked all priests for their parent's contact information to let them know about the new ministry this spring. With five new priests ordained in May, those parents were also invited to continue their prayer as members of PPOPs.

Hart and Elser said their sons and the challenges they face are always on their minds. With Father Stephen Hart in Lake Village, Father Andrew Hart in Stuttgart and Father Stephen Elser in Pocahontas, they realize their sons are isolated from other priests.

“That is why we wanted to get PPOPs going, because COVID has such an impact on the world,” Hart said. “They are isolated. Their parishioners are trying to come back (to Mass), but they’re afraid to come back. Even before COVID, it was a challenge being isolated, and the nearest priest is an hour away.”

Hart said she is most proud of the Diocese of Little Rock’s commitment and support for vocations.

“We have to be the only diocese in the world with a MOMMS and a PPOPs,” she said.

PPOPs isn’t just for priests’ parents. It’s for all Catholics in Arkansas.

“I think most people realize that priests need to be prayed for, but they need a day of sacrifice, a day of true mortification,” Hart said.

“It is so wonderful for me to know that every day someone is praying not only for her son but my son and all priests,” Elser said.

To join, all that’s needed is to pick a day of the week and commit to praying for priests. Hart and Elser recommend getting a copy of the diocesan directory or looking at the priest directory at dolr.org to become familiar with the names and faces of priests in the state. One can then decide which ways to pray, fast or sacrifice for priests’ intentions.

For more information, contact Hart at or Elser at .