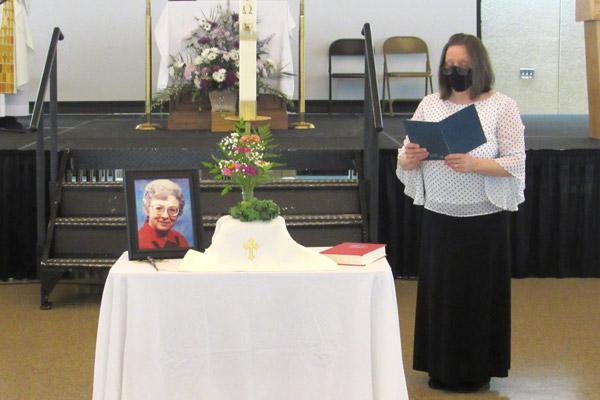 FORT SMITH — Since the pandemic began, the sisters of St. Scholastica Monastery in Fort Smith have been juggling.

They want to protect their members from COVID-19, especially their oldest members, including two who are 99 and another who is 101. They also want to honor the six members who have died since March 2020 and hold funerals open to their family and friends.

The spread of COVID has been a major concern for the Benedictines. The virus infected 13 sisters in December, exhausting the remaining sisters caring for them without help from lay staff members. Nearby Chapel Ridge Nursing Home, home to five sisters needing full-time nursing care, also struggled with outbreaks and is still closed to visitors. Father Joseph Chan, the monastery’s new chaplain, has recently recovered from COVID, and other monastery employees have had family members hospitalized with the virus.

“We hope to have the family back for a memorial Mass sometime in the future when it is safe for everyone to be together,” Sister Kimberly Prohaska, OSB, said.

“Five of the six sisters were cremated because of safety concerns with COVID,” prioress Sister Kimberly Prohaska, OSB, said. “We had been discerning and praying as a community and sisters had the option of choosing cremation or traditional burial in their funeral plans. Some, like Sister Alice, had no preference. We cremated five of the six sisters so that we could hold their funerals safely at a time when their families and friends could participate with us.”

Only two funerals – for Sisters Ethel Marie and Aubrey – have been held this summer when precautions began to lessen. The cremains of Sisters Macrina, Barbara and Rachel still sit on a table in the monastery chapel.

Sister Alice’s family wanted a traditional funeral and burial. She entered the monastery after raising six children, and her five surviving children live in Michigan, Indiana and Arizona.

“When Sister Alice died last October, the vaccine wasn’t available, and we were fully quarantined,” Sister Kimberly said. “We had lots of conference calls with the kids to develop a funeral plan. When they arrived at the monastery, we met them outside with signs of love and support, giving them six white roses. They had a private viewing and service for the family at the funeral home. When Sister Alice’s coffin was brought to the monastery for the funeral, we saw the six white roses inside.”

The family was not able to attend the funeral Mass in November and returned to their home states. They watched the funeral and burial on Zoom.

“We hope to have the family back for a memorial Mass sometime in the future when it is safe for everyone to be together,” Sister Kimberly said.

Sister Kimberly developed a booklet and ritual for a “welcoming home” service when the cremains of each sister are delivered by the funeral home. They place the sister’s cremains on the altar and hold a prayer service. At its closing, the sisters place the cremains on a table in the chapel.

“We have had five sisters’ cremains in chapel with us,” Sister Kimberly said, “and we still have three.”

When every sister was vaccinated and pandemic concerns temporarily eased, Sister Ethel Marie’s funeral was held July 5. Her sister, nieces and nephews in Louisiana could not attend but watched the Mass on Zoom.

“We sent them the mementos and cross that we would normally present them with at the funeral,” Sister Kimberly said.

Sister Audrey’s funeral was held at Sacred Heart of Mary Church in Barling, where most of her family are members.

“We had never had a funeral for a sister outside the monastery,” Sister Kimberly said, “but Father Matt (Garrison, pastor) was very gracious. They have been holding Masses in the parish center to allow for social distancing so we could accommodate the sisters and family safely. We invited a few of her family members to our sharing of the memories the night before. We were all together for the funeral and the burial on Aug. 5, but the family chose to have its own luncheon afterwards.”

With the resurgence of the virus, the sisters have once again increased their precautions. “We’ve been masking and sanitizing again at the monastery,” Sister Kimberly said. “We try to keep our older sisters ‘in bubble wrap’ as much as we can.”

For now, the funeral dates for the remaining three are still unknown. Sister Barbara’s will likely be next, when her large family can travel safely. Sister Barbara had two sisters who are part of the monastic community — Sisters Stephanie and Regina. The rest of her extended family live in several states.

Next will be Sister Rachel’s funeral, who died this summer.

“Sister Rachel’s brothers and sisters have all passed away,” Sister Kimberly said, “but she was close to many nieces and nephews who live in Texas and Oklahoma. We keep in touch with all the family members and are trying to work out a funeral date.”

The last funeral will be for one of its most known members, author and retreat leader Sister Macria. She was the first sister to die during the pandemic. Sister Kimberly said her funeral plans are the most challenging because she had a large family and many friends all over the country who would like to attend her funeral. The friends recently published a book of memories, “Macrina, Your Sister,” and are planning to release some of her journals with Ave Maria Press.

As for the sisters, they are praying and coping well.

“It is difficult for many of us,” Sister Kimberly said, “but we know that our call is to transition back to God.”