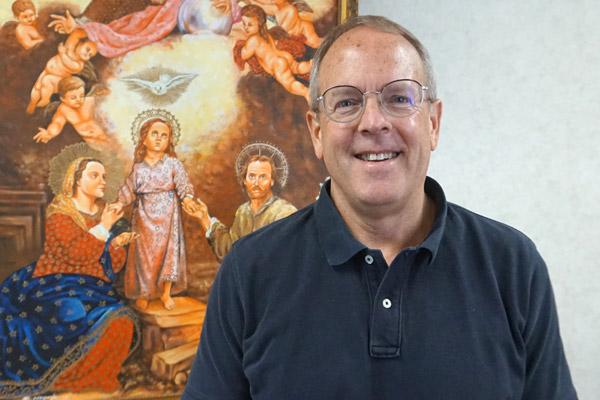 At a glance: Jeff Hines

As the Diocese of Little Rock continues to develop strategies for helping people grow in their faith, it has added an advocate to its mission.

Jeff Hines, who has previously served as chairman of the diocesan pastoral council and has experience in campus ministry and youth and adult catechesis, joined the diocese as associate director of the Office of Faith Formation in August. He will be responsible for implementing recommendations of the Report on Faith Formation in Diocese of Little Rock, published in 2018, by director Father Erik Pohlmeier.

“The Office of Faith Formation has the responsibility of seeing our people grow closer to Christ in their life every day and in the Church,” Hines said, “and we do that through finding ways to equip our people to be disciples and make disciples.”

Hines, a native of Dallas, moved to Arkansas after he completed his bachelor’s degree at Southern Methodist University in 1982. At the time, he attended non-denominational evangelical churches, which he said were “very Bible oriented” with an emphasis on Scripture study.

“That became a very intellectual exercise, and not really that spiritual,” he said.

About a year after moving to Fort Smith, he met his future wife, Christine, a Catholic, and the two were married in 1985.

“My wife introduced me to the Catholic Church,” he said. “I didn't really understand the Church that much then. I didn't understand it at all, but I joined and have grown to really love it, the depth of it. It moved from being a head exercise to really one of the heart.”

Hines comes to the diocese after working in information services for 34 years. He advanced through his career from being a computer programmer to eventually vice president of information technology.

“I became so wrapped up in that work and that goal to advance that I realized that I was being motivated by money and not by my real goal, which was just to grow closer to God and to help others grow closer to God,” he said.

In 2016, at 55, he retired but didn’t stay on the sidelines long. Within weeks he took a job teaching technology at Trinity Catholic School while working on a degree in theology through the Little Rock Theology Institute.

“Since I first met Jeff, when he was studying theology at the diocese, I was struck by how well he understood our Catholic faith,” said Father Erik Pohlmeier, director of faith formation for the Diocese of Little Rock. “In further conversations it became clear he wanted to share his love for God and our faith with others. He is smart and creative in his thinking. He has a lot to offer to our Arkansas parishes.”

Dennis Lee, chancellor for administrative affairs at the Diocese of Little Rock, said, “Jeff has the right balance of education, training and experience. He is a good listener, and he has the ability to connect with the Catholic faithful in a welcoming manner.”

“We’re looking for ways to move away from the traditional education paradigm toward lifelong faith formation,” he said. “Traditionally in the Catholic Church, religious education is done in schools. But that leads people to feel they’ve ‘graduated’ when they get confirmed and resulted in a decline in people continuing to practice their faith as they become adults.”

Hines said the Church’s mission is “to equip our people to be disciples and make disciples.”

“It’s my job to try to find ways for all of us to grow closer to Christ,” he said.

At a glance: Jeff Hines