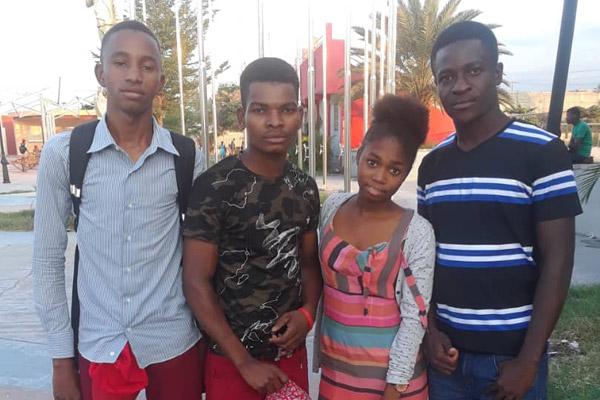 ROGERS -- Haiti has been staggered by misfortune this summer.

On July 7, President Jovenel Moise was assassinated in an attempted coup d'état, producing more turmoil for an already unstable government. As Haitians waited to see how the government would recover, the country suffered another catastrophe. A 7.2 magnitude earthquake rocked the southern part of the country Aug. 14, killing more than 1,000 people. Tropical Storm Grace swept over the nation two days later. Rescue and recovery amid the devastation became the new focus.

Father Rodolphe Balthazar, a native of Haiti, has watched the hardships in his country this summer. Father Balthazar, associate pastor of St. Vincent de Paul Parish in Rogers, continues to pray for his country and its people.

Parishioners in the Diocese of Little Rock are sending help. In Bombardopolis, a small town in northern Haiti, St. Francis of Assisi Church is stable and growing thanks to its sister parish, St. Vincent de Paul Church in Rogers. The Rogers parish helped build the parish school and continues to fund it.

“Even today, it is hard to believe that this could have happened to the president,” he said. “But the earthquake was unexpected, very unexpected in the south of Haiti where it occurred.”

Father Balthazar said many of the churches where humanitarian aid is usually distributed were destroyed. He estimated more than 200 churches and close to 300 schools were severely damaged or destroyed. In these circumstances, helping the country has become even more challenging.

“The hope is that these political groups can forget about their own self-interest and make a plan that is more about the people,” Father Balthazar said.

He feels the poor are getting poorer, and those risking their lives for a better life in the United States are increasing.

Father Balthazar, a native of Port-de-Paix in northwestern Haiti, said his parents and brother are safe. His family has discouraged him from returning home because of increased kidnappings of priests for ransom, he said.

Parishioners in the Diocese of Little Rock are sending help. In Bombardopolis, a small town in northern Haiti, St. Francis of Assisi Church is stable and growing thanks to its sister parish, St. Vincent de Paul Church in Rogers. The Rogers parish helped build the parish school and continues to fund it. Despite the pandemic and no in-person missionary outreach to the country, financial assistance to St. Francis of Assisi Church has not paused.

Thankfully, Bombardopolis did not sustain any damage from the earthquake. Because it is a remote and poor area, they have not experienced the unrest that is more prevalent in the larger cities, said Deacon Ronnie Hoyt, a liaison for the two parishes.

“We pay teacher salaries, fund one meal per day and pay for school supplies and uniforms,” Hoyt said. “Additionally, another $8,000 was sent to them to be used for the needs of the schools at the discretion of the pastor, Father Adner. An additional $5,000 was to be used for maintenance and expansion of the high school, with an additional $2,000 was used for more books for the students.”

"We average about $70,000 a year in total financial support to our sister parish in Haiti," Hoyt said.

“The main purpose of our ministry is to provide the parishioners the opportunity to grow in our faith through the faithful lives of the people of Haiti and to be able to recognize Christ in the people of Haiti and to be the face of Christ to them,” Hoyt said. “Our main purpose was to create a consistent, sustainable educational opportunity for the students.”

In 2007, the initial goal was to stabilize the educational system by providing for their basic needs. In the beginning, classrooms had no desks or chairs, and school supplies were not available. Students were often hungry. Teachers were not being paid, and at times, classes had to be canceled for lack of teachers.

Hoyt said the focus then shifted to starting a high school. Once the high school was constructed and opened, the focus grew to ensure opportunities for graduates to attend college or get a job.

St. Vincent de Paul Church annually hosts an appeal to the parishioners, a quarterly special envelope collection during Masses and a Lenten box program in all religious education programs and in the school.

In south Arkansas, four churches annually contribute and help the Haitian parish of Colladere and the nearby schools in Campeche' and Coupeal.

Last year, more than $42,000 was raised and sent in monthly increments to pastor Father Servil Asmith. The funds assist in buying food and propane and salaries for the teachers, cook and caretaker. In February 2020, close to $5,000 was collected to buy medicine and medical supplies for a medical mission led by Dr. Matt Hulsey.

Sheila Hansen, who has served as bookkeeper for the Haitian mission since December 2017, said around $70,000 was collected in 2018 and 2019 to transport water to the parish and schools.

"There is not a Sunday that goes by that we don't get individual checks from parishioners for Haiti," Hansen said.

St. Joseph Church in Conway also hosted a special collection during all Masses in late August to go to emergency relief for earthquake victims.

St. Joseph High School business teacher Larry Trussell also came up with a way to involve the entire student body. A $1 jeans day raised $257 from the elementary, middle and high school campuses to be added to the Mass collections.

Other parishes around the diocese have held collections during Masses in August and September to support Catholic Relief Services’ work in Haiti.

Hoyt recommends that people who want to serve Haiti study the Church's teachings on social justice.

“I would offer that we have much to learn from the people of Haiti regarding our very own dependence upon God as opposed to a worldly view of everything,” Hoyt said. “The people in Bombardopolis struggle, but they are a joyful people of faith, hope and love.”