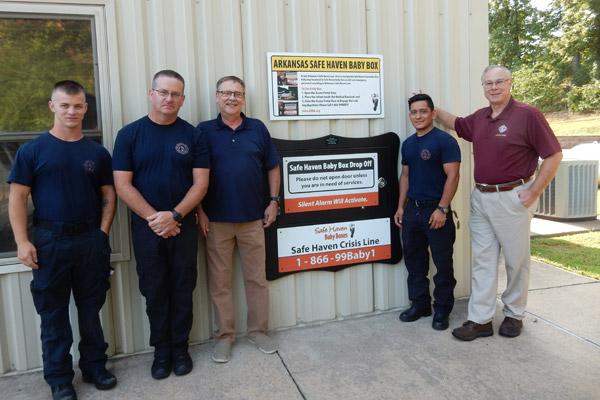 BENTON – During the first three hours after his birth, his young life was filled with uncertainty. But today his life is with a loving family because someone, possibly his mother, decided to give him a chance.

On May 22, 2020, the now 1-year-old boy became the only child who has been surrendered at a Safe Haven Baby Box in Arkansas. The newborn was left at the Benton Fire Station at 2717 Edison Ave., which was the first Safe Haven Baby Box location in the state.

“He was adopted by a local couple who had been wanting to have a child,” said former Benton Fire Chief Bill Ford, who was instrumental in having the Baby Box installed.

“The baby is doing very good. Everything went off as it should,” said Ford, who cherishes a photograph of the boy dressed in a Santa suit that was sent by his adopted parents.

Arkansas law allows a parent to surrender a child who is 30 days old or younger to a newborn safety device, like a Baby Box. The law protects the parent from being prosecuted for endangering or child abandonment.

Ford is a member of Our Lady of Fatima Church in Benton and the Knights of Columbus.

A Safe Haven Baby Box is designed to prevent illegal abandonment of newborn children by providing a safe and anonymous way for someone to surrender their child. Since the Baby Box was installed at the Benton Fire Station in September 2019, others have been installed in Rogers, Springdale, Jonesboro and Conway.

The box, which is heated and air conditioned, is equipped with an alarm that alerts first responders that a baby has been surrendered.

Dale Flamand wants more newborn children to have the same chance and is spreading the word throughout the state about the Safe Haven Baby Box program. Flamand, pro-life director for the state council of the Knights of Columbus, worked with Ford to install the box.

“My plan is to have a Baby Box in every population center in Arkansas,” Flamand said, adding he would like 50 Baby Boxes installed.

Flamand said more Baby Boxes are in the process of being installed in Fort Smith and Maumelle and second ones are planned in Rogers and Benton. The Knights of Columbus had coordinated and raised funds to pay for the installation and operation of Baby Boxes in Benton, Jonesboro, El Dorado and Maumelle. The Knights of Columbus Council 6419 in Hot Springs is trying to find a location to install a Baby Box in Garland County.

Arkansas law allows a parent to surrender a child who is 30 days old or younger to a newborn safety device, like a Baby Box. The law protects the parent from being prosecuted for endangering or child abandonment. A child can also be surrendered to a hospital, fire department or law enforcement agency. The 2001 law was amended in 2019 to allow the use of a newborn safety device at manned fire stations.

Flamand said he became interested in the Baby Box program in 2017 when he heard Monica Kelsey, founder of Safe Haven Baby Box, speak at the March for Life in Little Rock. Safe Haven Baby Box provides the boxes to other organizations, operates a hotline for mothers who are thinking of giving up their child and makes the public more aware of Safe Haven laws. About 80 Baby Boxes are installed in Indiana, Ohio, Kentucky, Florida, Arizona and Arkansas.

Flamand said it costs about $10,000 for the box and to operate the system. He helped raise money to get the Baby Box installed at the Benton fire station.

“The billboards draw attention to Safe Haven laws and provides the information that there is someplace a child can be surrendered locally,” Mimms said.

She said the work by Flamand and the Knights of Columbus has helped increase awareness.

“The Knight of Columbus support has been tremendous,” she said. “As we get closer to the repeal of Roe v. Wade and women can no longer get abortions, then Safe Haven is safe option of their babies.”