From statues to stained glass to prayer, "Church's Guardian" popular in the Natural State 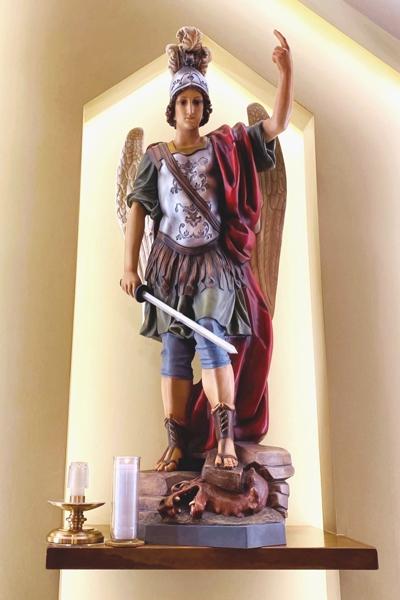 Jenn Cummins
A statue of St. Michael the Archangel stands in the sanctuary of St. Michael Church in Van Buren. In recent years, the parish has prayed a 40-day devotion to their patron saint.

Jenn Cummins
A statue of St. Michael the Archangel stands in the sanctuary of St. Michael Church in Van Buren. In recent years, the parish has prayed a 40-day devotion to their patron saint.

St. Michael is never too far away in some Arkansas parishes. Several churches have angel statues, regularly pray to St. Michael the Archangel during Mass and have special devotions.

The Sept. 29 feast day of the archangels -- Sts. Michael, Gabriel and Raphael -- is also known as Michaelmas (pronounced mick-el-mess). Michael, derived from the name “Mikha'el” is Hebrew for “Who is like God?” Several food-related customs surround the feast day, including eating blackberries by Michelmas. The legend says that when St. Michael threw Satan out of heaven, he landed on a blackberry bush that he cursed. People traditionally pick and eat blackberries by Michelmas or they will be too bitter.

For about three years, St. Michael Church in Van Buren has held a 40-day devotional to their patron saint and recently participated in a nine-day novena. Secretary Jenn Cummins said the devotional in the past has taken part in the church, but this year, due to ongoing COVID-19 concerns, pamphlets were distributed to parishioners each week for the at-home devotion. At least 25 parishioners participated, Cummins said.

“He’s our patron saint -- ‘St. Michael the Archangel, defend us in battle,’ he’s our protector. He’s one of the protectors of the church and not just us, but in other countries,” Cummin said, recalling that the Hellenic Air Force in Greece put the image of St. Michael on their military planes.

The devotion consisted of saying the St. Michael prayer daily, lighting a candle before an image of St. Michael and making a penance for 40 days.

After it was revealed in 2018 that several U.S. bishops withheld hundreds of names from their accused clergy abuse list, pastors were authorized to pray the prayer to St. Michael at Mass.

Here are some of the parishes that pray the prayer to St. Michael at the conclusion of all or some Masses: St. Francis of Assisi Church in Fairfield Bay, Our Lady of Fatima Church in Benton, St. Rose of Lima Church in Carlisle, Christ the King Church in Little Rock, St. Peter the Fisherman Church in Mountain Home, All Saints Church in Mount Ida and St. Vincent de Paul Church in Rogers.

Several parishes also honor St. Michael or the angels with religious artwork, including:

Click for the All night, all day, angels are watching over us index