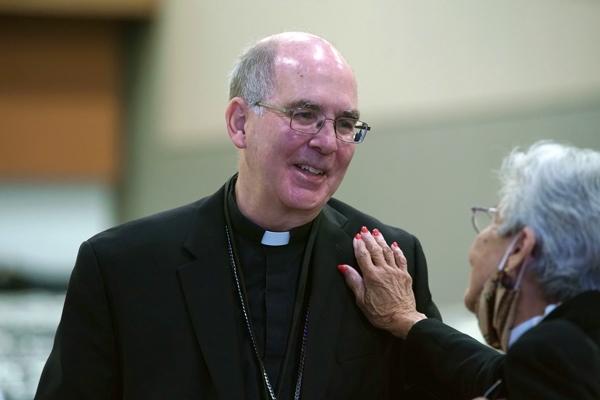 Archbishop Sartain gave an address titled "Go in Peace and Announce the Presence of the Lord."  His message revolved around how Christianity -- and the Eucharist -- have survived since those grief-filled days following the crucifixion.

"Christians gathered for Mass in secret -- and in violation of the Roman edict against such worship -- because even then they realized that we cannot live without the Eucharist, and for that belief many of them were martyred," Archbishop Sartain said.

The congress at the Renasant Convention Center -- and the anniversary celebration -- was delayed a year because of the COVID-19 pandemic.

"Without the Eucharist, we would lack the faith to face our daily problems, and life would be very difficult for us all," he said.

The talk featured crucial lessons on the Eucharist.

Archbishop Sartain illustrated the principles by showing a painting of Jesus asleep in a boat on the Sea of Galilee, while his apostles pondered their fate in the stormy waters.

"I have experienced great calm when looking at this picture because Jesus was at peace -- not just sleeping," he said. "He knew that all was well when he rested with his father."

Following his speech, he spoke about his 45 years as a priest and retirement to Heber Springs in 2019.

"It was a good decision that I made, and I can still do different things such as giving talks and spiritual direction to priests," he said. "I am living life at a pace which fits my health."