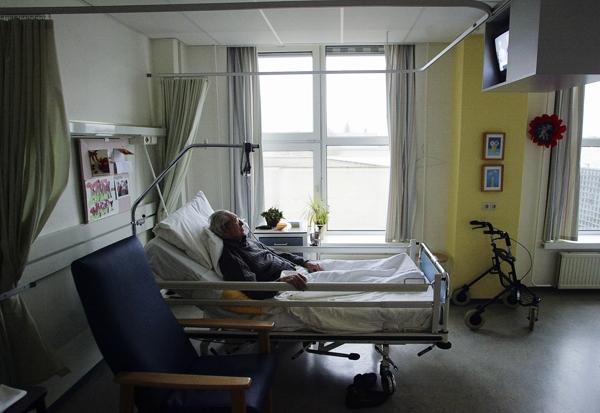 CNS photo/Michael Kooren, Reuters
An unidentified man suffering from Alzheimer's disease and who refused to eat sleeps peacefully the day before passing away in a nursing home in Utrecht, Netherlands. The catechism states, "direct euthanasia consists in putting an end to the lives of handicapped, sick or dying persons. It is morally unacceptable."

CNS photo/Michael Kooren, Reuters
An unidentified man suffering from Alzheimer's disease and who refused to eat sleeps peacefully the day before passing away in a nursing home in Utrecht, Netherlands. The catechism states, "direct euthanasia consists in putting an end to the lives of handicapped, sick or dying persons. It is morally unacceptable."

What is legal, moral?

While Arkansas does not allow physician-assisted suicide or euthanasia, the practice has some legal status in 10 states and Washington, D.C.

Oregon was the first state to legalize physician-assisted suicide in 1997. According to a 2020 report on pro-euthanasia website deathwithdignity.org,  in 23 years, 2,895 people received lethal doses of prescription drugs, with 1,905 of those people (66 percent) dying after taking the medications in Oregon. In 2020, the estimated rate of death from physician-assisted suicide in Oregon was 65.5 per 10,000 deaths.

The term “quality of life” is subjective, but in the eyes of God, every life has quality. The practice of taking one’s own life with the help of a doctor or doctor-prescribed medication remains a pro-life threat.

“What we need to do is recognize that there is quality in every life -- human quality, human dignity -- because we're created in the image and likeness of God,” said Catherine Phillips, diocesan respect life director, who walked the journey of suffering with her husband John, who died of esophageal cancer in 2017. “And when we start setting this arbitrary thing of, ‘If a person doesn't have quality of life, they should be allowed to die,’ that we should end their life or they should end their own life if they want to, then we're really looking at suicide, or assisted suicide or euthanasia, and it is a threat.”

“Whatever its motives and means, direct euthanasia consists in putting an end to the lives of handicapped, sick or dying persons. It is morally unacceptable.”

Physician-assisted suicide is when a person takes a lethal dose of pills prescribed by a doctor, for the purpose of dying. Euthansia is death at the hands of a doctor. Both are illegal in Arkansas.

They are also morally unacceptable, with the Catechism of the Catholic Church stating, “Whatever its motives and means, direct euthanasia consists in putting an end to the lives of handicapped, sick or dying persons. It is morally unacceptable.” (catechism, no. 2277)

St. John Paul II was vocal about this threat, stating in the “The Gospel of Life” (Evangelium Vitae), released in 1995, that it is a “grave violation of the law of God.”

“True ‘compassion’ leads to sharing another's pain; it does not kill the person whose suffering we cannot bear,” St. John Paull II wrote.

“The Good Samaritan” (Samaritanus bonus), a letter released in 2020 by the Congregation for the Doctrine of the Faith with approval from Pope Francis, called euthanasia a “supreme dishonor to the creator.”

“Where faith is absent in the face of the inevitability of illness, especially when chronic or degenerative, fear of suffering, death and the discomfort they entail is the main factor driving the attempt to control and manage the moment of death, and indeed to hasten it through euthanasia or assisted suicide,” the letter stated.

Phillips said there’s a lot of fear and pain when it comes to a loss of autonomy if a person has a terminal illness, such as dementia or depression. Feeling like a burden to others can be a contributing factor.

“God calls us to a life of dependency on him, and a life of sharing with one another our burdens. And so it's really kind of walking with a Christian mindset of living and dying and I'm talking, earthly death, so that we can rise to eternal life,” Phillips said.

‘Desire to be loved’

Dr. Rafael Rosario, a Catholic palliative care physician who practices at Sidney & Lois Eskenazi Hospital in Indianapolis, spoke recently with other physicians about end-of-life issues for the Catholic Medical Association. Palliative care provides comfort to patients who are suffering, which can include medical, emotional and mental health support, focusing on the whole person.

“I think that we have an epidemic of loneliness in this country and an epidemic of being made to feel if we cannot contribute the way society suggests we should or we think we should … I get a strong sense that people seek to not be a burden. Or not to experience the burdens that are common with loss of function, with aging,” or a terminal illness, Rosario said.

While in training in 2009, Rosario met a woman named Renee, 38, who was suffering from advanced cervical cancer. She was married, with two teenagers. He remembers when she took his hand, asking if there was a way she could end her life with his help.

“Her distress at being bed bound and seeing healthy, attractive legs turn into very swollen useless appendages, an inability to go out to do anything with her husband … that was the result of her request to have control over her death,” he said.

The two discussed the roots of the request and what ways they could mitigate suffering to give her more autonomy, through medication and otherwise. Eventually, she allowed him to discuss the request with her family.

“Things got better because the family was aware,” she felt that way. They did not want her to suffer but also did not want to end her life prematurely, he said. “We made it a point to not try to inundate her with, ‘Why do you want to do this?’ or ‘Don’t do that,’ but with support and love.”

Rosario said he still keeps the prayer card from her funeral in his office.

“I think people desire to be loved. That’s what we’re wired to do, that’s the core of our Catholic faith, Christian faith,” Rosario said. “I think there’s a lot to be said for a desire to continue to look for ways not to feel abandoned.”

Father Joseph Chan, pastor of St. Leo Church in Hartford and chaplain of St. Scholastica Monastery in Fort Smith and Mercy Crest in Barling, was a palliative care doctor at Mercy Hospital in Fort Smith, before being ordained a priest in 2016. When he was practicing, he had family members ask about ending their loved ones' life, saying things like, “How can we make this faster?” The best way a family can support someone in their final days is by being present and speaking to them, as hearing is the last sense to go, he said.

“Give comfort to them knowing you are there, present,” Father Chan said.

Spiritual healing also can come at the end of a person’s life by natural means.

“I would say the most important thing is they find meaning in whatever state they’re in. Because nobody really knows when you’re going to die,” Father Chan said.

Physician-assisted suicide may also not reduce suffering, particularly if a patient takes the medication incorrectly, Father Chan pointed out. He said it’s important for a person to write down their end-of-life wishes and have a conversation with a trusted person about it. As a priest, he has seen patients find healing by looking over their life in a restorative way, thanking God for the blessings, forgiving others and finding forgiveness through confession, especially with last rites.

“There’s such a thing as closure,” he said.

What can I do?

Catholics can look at their own lives and examine what the term “quality of life” means to them, assure their loved ones they will walk with them and be a support to elderly parishioners who have no one.

“A lot of people will say, ‘Well, if I lose my legs tomorrow’ or if I can't do this or if I can't do that ‘just put me out to pasture,’ and we say it jokingly, but let's sit with this for a while,” Phillips said. “Do we really have the faith? What our Catholic faith calls us to is trust in the Lord, that he'll be with me in all circumstances and that I'm not called to end my life through suicide. Delegating the authority to a doctor to prescribe a lethal dose, it's the same thing. So sitting with that as an individual, committing to living the life that God gives us, with all its crosses to bear.”

Even though it can be an uncomfortable conversation, discussing with loved ones the differences between extraordinary and ordinary means of care and looping in their pastor and physicians to help make the decisions is important, beyond just filling out a form like an advance directive or living will.

Phillips said Catholics can still maintain a connection even if they can’t visit the sick in a hospital or nursing home. Eucharistic ministers who take Communion to the homebound not only help share the life-giving Body of Christ but often open the door to conversation that can change a person’s day.

“Do you know a family who doesn't have relatives near? Can you be a support person for them? Can you be a prayer partner? Can you reach out to an elderly person that lives in your community, your neighborhood, someone in your parish who could just use 10 minutes of conversation?” Phillips said.

For loved ones who have slipped into depression or despair, thinking that their life is a burden to others, being honest, loving and supportive is our call.

“We want to give them the love and support that they need and the real help that we need, we want to change the structures in place that legalized death in our world, that make it permissible to have a culture of death,” Phillips said. “So, for a person who's at the end of life: Don't leave them alone.”

What is legal, moral?

While Arkansas does not allow physician-assisted suicide or euthanasia, the practice has some legal status in 10 states and Washington, D.C.

Oregon was the first state to legalize physician-assisted suicide in 1997. According to a 2020 report on pro-euthanasia website deathwithdignity.org,  in 23 years, 2,895 people received lethal doses of prescription drugs, with 1,905 of those people (66 percent) dying after taking the medications in Oregon. In 2020, the estimated rate of death from physician-assisted suicide in Oregon was 65.5 per 10,000 deaths.