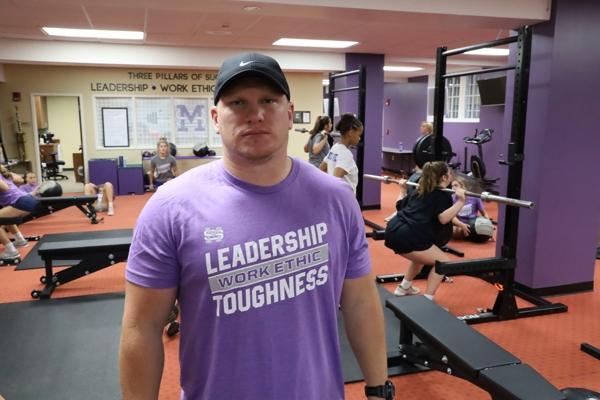 Dwain Hebda
Jonathan Reed joined the staff of Mount St. Mary's Academy in Little Rock this fall as its strength and conditioning coach as well as teaching P.E. and health and coaching soccer and basketball.

Dwain Hebda
Jonathan Reed joined the staff of Mount St. Mary's Academy in Little Rock this fall as its strength and conditioning coach as well as teaching P.E. and health and coaching soccer and basketball.

It’s 6:30 a.m., and the windows of McAuley Center at Mount St. Mary Academy in Little Rock are ablaze against the just-warming dawn. Hip-hop thumps through the speakers, drowning out the grunts of 20 freshmen basketball and volleyball players. Metal clangs on metal in time with the thump-thump-thump of a medicine ball on a mat.

The athletes perform their reps as stray hair flies out of ponytails, and exertion floods their cheeks and pops out in beads on their foreheads. They fix their eyes dead ahead and train intently, waiting for the whistle. It shrieks, and a granite figure with shirt-seam-defying biceps barks out from under a low-slung baseball cap. Athletes rotate, metal clangs and music pounds out a new set.

“We’re here before school at 6:30, after school until 4:30. Then we have what we call ‘activity period’ where our athletes are lifting, whether it’s two days a week or three times a week.”

Reed is well-acquainted with weight rooms, having played college football and serving as a strength and conditioning coach at two different high schools in his native Louisiana. Along the way, he married a Mount girl, Leslie Baker from the class of 2007, and her eventually wanting to return to Arkansas led him to look around for job opportunities.

“I’d applied everywhere, and one day my wife was like, ‘Hey, why don’t you give Mount St. Mary a call and see what’s going on there?’” he said. “Lo and behold, the athletic director, Coach Lane West, gave me a call back. She saw my background and said they’d never had a full-time strength and conditioning coach on campus.”

“I had a couple of other interviews at some other schools where I could have coached football, but after talking with Coach West and really thinking it over with my wife, I went with my gut to where the Lord led me. This was a chance to start something that’s never been done, to do something that I absolutely love doing and to really be at ground zero in terms of building the program the right way.”

Reed joined the staff in June and immediately set about revamping the existing weight room, improving its layout, installing new equipment and wedging the work in and around his new summer regimen for Mount sports teams to improve speed, agility and overall strength conditioning. Athletes were delighted by the new digs, even if many didn’t know what to make of the new coach and his program. Truth be told, it was an adjustment for everyone.

“It’s a little bit different being at an all-girls school for me,” Reed said. “I never would have thought we’d get cheerleading in here, but cheerleading’s doing great. They’re athletes in my eyes just as much as volleyball or basketball girls are. It’s a sport, and I want to make them understand that I’m going to take it seriously. There’s no differentiation in terms of what you can and can’t do, whether you’re on the court or off the court.”

In addition to the strength and conditioning program, Reed teaches physical education and health and is on the soccer and basketball coaching staff. This level of involvement gives him ample opportunity to reinforce his overall philosophy for what makes a winning athlete and a winning program.

“I believe in reps and sets and weights and lifting, but most of all, I believe in people,” he said. “My biggest thing that I preach in the weight room is we base everything we do off of the three pillars of success, and that’s leadership, work ethic and toughness.”

“No matter what, you’ve got to be a good leader to the person next to you. You’ve got to have an outstanding work ethic because what you put in is what you’re going to get out. And you have to be as mentally tough, emotionally tough and physically tough as you can be. I believe in developing that in athletes, and the weight room is my platform. It’s a pleasure to impact these young lives.”