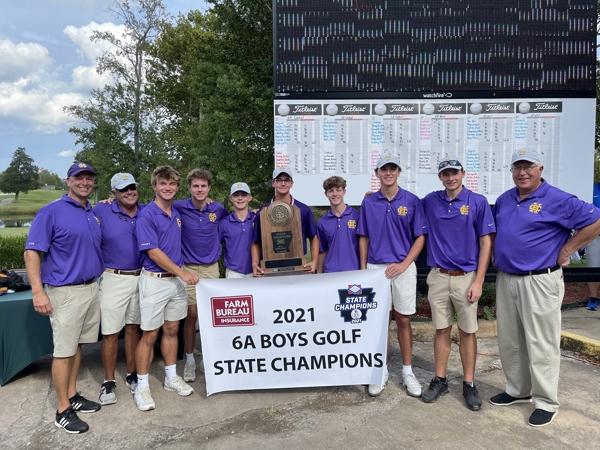 Harrison Franks, senior golfer for the Catholic High Rockets, didn’t make a single shot during the 2021 6A Boys State Golf Tournament, Oct. 5-6, because of injury. But he played difference-maker nonetheless, thanks to the pep talk he delivered to his teammates just before the event’s second and deciding round.

“Harrison stepped up and gave a motivational speech to the guys, and it was just great to hear one of our leaders stepping in like that,” said the Rockets’ fifth-year coach Brian Loeb. “To really take ownership of the team like that and pass on some good words of advice was impressive.

“They came out the second day and they were so focused. They went out there and they all played phenomenally.”

Franks’ impassioned words lifted his mates to dominate both the field and the course at Hurricane Golf and Country Club in Bryant. The Rockets won the team title going away, besting Fayetteville by five strokes and well ahead of two-time defending state champ Bentonville in third.

“They came out the second day and they were so focused. They went out there and they all played phenomenally.”

The squad -- made up of senior Nash Johnson, junior Andrew Payne, sophomore Austin Eanes, freshmen Sam Glover and Adam Squires as well as injured seniors Franks and Tripp Maris -- showed mental toughness to go with great shot making. An incorrect scorecard violation Oct. 5 cost them a conference title to go with the state hardware (they placed second), which could have affected them on Day 2.

Instead, all five Rockets broke 80, including Glover, who suffered the DQ due to the scorecard error. Loeb said this kind of resilience spoke to the closeness of the team.

“I’m just happy for the guys,” he said. “They put a ton of work and effort into this and it’s good to see that hard work paid off for them.”

Payne shot a 2-under 70 on Tuesday and followed that with a 71 on Wednesday to claim top individual honors at 3-under 141. The junior entered the second day tied for the lead with Bentonville senior Jake Bartlett, but dropped a couple of shots at the turn, only to charge on the back nine, winning by two strokes.

“It was just awesome to be leading the team as a junior,” Payne said. “All I was trying to do on the second day was just try to do the same thing I did the day before. Just take good shots, one shot at a time, and if I pulled out a victory, so be it. If I didn’t, so be it. I just wanted to play a good round.”

Payne’s win qualified him for the overall tournament Oct. 14 at Pleasant Valley Country Club in Little Rock. He also earned 6A All Conference and All State honors, along with Johnson and Eanes.

Coach Loeb was assisted by Bubba Klugh and Mike Majkowski, who said the squad was primed for post-season play thanks to a grueling qualification process during the year.

“We had 20 players on the team this year and the last couple years we’ve held as many as 26 and 29 players on the team,” Majkowski said. “Coach Brian, he’s got it to where we have matches and tournaments during the short season from August up to the week in October and he gives just about every player a chance to play in a match or tournament and represent the school.

“So, all the boys have had chances to play and we had a pretty rigorous qualification to make the five guys to play for state. We really kind of ground them a little bit and got them to where they were ready. It was a good team effort and the guys came together. We’ve got a lot of good golfers and they challenge each other throughout the year.”

The state title is the first for Catholic High since 2006 and a fitting way to cap a high school career, Johnson said.

“It feels amazing,” said Johnson, who will play golf for the University of Central Arkansas in Conway next year. “We've been so close; I think we got second my freshman year and sophomore year and then fourth my junior year. I was really wanting to get it before I left Catholic High. It was an honor to do it my senior year.”