Mini loaves of homemade bread are baked and given out to teachers, staff at CTK school 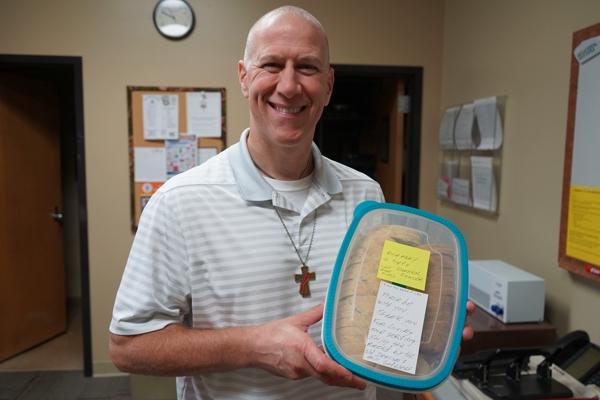 Aprille Hanson Spivey
Deacon Danny Hartnedy, a religion teacher for seventh and eighth grade students the past 25 years at Christ the King School in Little Rock, shows off his homemade bread in the teacher’s work room Oct. 25. He has been baking bread each week for staff since August 2020.

Aprille Hanson Spivey
Deacon Danny Hartnedy, a religion teacher for seventh and eighth grade students the past 25 years at Christ the King School in Little Rock, shows off his homemade bread in the teacher’s work room Oct. 25. He has been baking bread each week for staff since August 2020.

On any given weekend, Deacon Danny Hartnedy can be found in the kitchen, prepping, mixing and baking homemade bread.

These two hours are dedicated to his fellow teachers and staff at Christ the King School in Little Rock. Hartnedy, who celebrated 25 years as a junior high religion teacher this year, said it was a routine he established in 2020 as the uncertain school year kicked off amid the COVID-19 pandemic. Each small loaf of bread includes an inspirational message on the packaging, like “Peace be with you” or “Jesus says, ‘I am the bread of life,’ please take some bread.” But it has always been less about the food itself, but rather the encounter with brothers and sisters in Christ.

“Deacon, the name means to serve. A powerful Scripture for me is ‘Jesus said that the son of man came not to be served, but to serve,’” Hartnedy said.

Dubbed “ The Old Deacon’s Mill,” a play off of Old Mill Bread in Little Rock, the idea was born out of a 30-day Ignatian silent retreat that Hartnedy, a certified spiritual director, took in June 2020 at Creighton University Retreat Center in Griswold, Iowa. He was encouraged to “lean into creativity” and that led him to the kitchen. He was also inspired by his son, John Paul, a six-year seminarian at Assumption Seminary in San Antonio, who began baking in his freshman year in the seminary.

“I think it was good to have someone checking in and making sure you’re OK and a little treat never hurts too … that was a labor of love for him.”

He’s tried his hand at caramel and chocolate candy but has zeroed in on baking bread. His types include rosemary, basil, orange cranberry, lemon poppyseed, banana, dill and honey whole wheat. They produce two full loaves of bread, or 16 “baby loaves.”

“For me it’s leaning into the process that requires patience. So just patiently measuring everything out and allowing the time to let the bread rise,” Hartnedy said, adding that while it’s fun, it’s also a time for growing spiritually. “Every loaf is different, even if you follow the exact recipe it comes out with a little different flavor, texture, color. Trust in whatever it’s going to be. Relinquishing control. That’s certainly the growing end of grace.”

The idea to start baking for his fellow teachers started as a way to boost morale as a challenging year was about to begin in August 2020.

“A lot of people may still have memories of grandma making homemade bread or rolls at Christmas or Thanksgiving; to share that, but to tap into something deeper that homemade flavor and texture can bring,” Hartnedy said.

“It was different last year; instead of the kids coming to our classrooms, we were traveling teachers. We all had a cart and rolled all around the school. We knew when we went to Deacon's room, we knew he’d have mini loaves of bread … and he’d have an encouraging message,” Kings said. “And it’s just been such a nice pick me up. I’d get to his room right before lunch” last year.

Principal Kathy House still favors the orange cranberry bread. She said he even came to deliver it in the summer, when he knew many teachers were preparing for school.

“I think it was good to have someone checking in and making sure you’re OK and a little treat never hurts too … that was a labor of love for him,” House said, noting that it’s true to his character.

He has always been protective of the staff at the school, she said.

“I can tell you numerous stories about him,” she said, adding that one day when school was closing early because of snow, “All the teachers’ cars were covered. He went outside and knocked all the snow off all the cars and walked with all the teachers. That’s just his nature. He takes care of us all.”

Looking back, Hartnedy said it was and is a small gesture of hope for the days to come.

“It was just a little something to say ‘we’re going to make it’ and we did,” he said.