Victim's family prays for 22-year-old mother sentenced in violent killing, her children, too 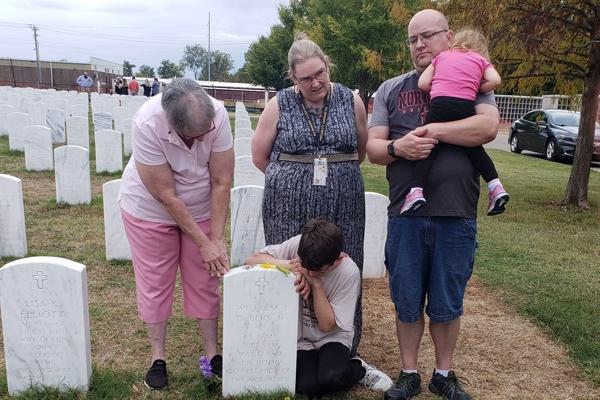 A Fort Smith Catholic family has found a way to honor the life of a family member murdered in 2019.

The family of William DuBois, who was murdered on July 11, 2019, was recently interviewed by the Investigation Discovery network for a program about his case.

“‘The Murder Tapes’ tries to show what happens to the family of the person who was killed through family interviews, body cam surveillance and jailhouse footage,” Theresa DuBois, the victim’s daughter, said. “There will be footage of the police finding my dad’s body and my brother Andy entering the house, although Dad’s body will be blocked out. It will be graphic.”

Although the interviews, recorded at a local studio with a video link to Investigation Discovery in New York, were difficult for DuBois’ widow Susan, son Andy and daughter Theresa, the show gave them a chance to honor their husband and father. DuBois was also a grandfather, first lieutenant in the U.S. Army, retired oral communications and drama teacher in the Fort Smith School District, Third and Fourth Degree and former grand knight of the Knights of Columbus and active member of Christ the King Church.

“My church family comes up and tells me they are praying for us, and I tell them ‘Pray for her.’”

Bill DuBois, 72, lived alone in a duplex in Fort Smith near Andy’s family at his death.

“Bill had had a series of strokes, the last one very violent,” Susan DuBois said. “He grabbed my wrist and wouldn’t let me go, and Andy came and got him to release me.”

The family decided that Bill should get his own place, although they all remained close. Susan visited him on the way home from bingo about two hours before he was murdered.

DuBois’ body was discovered when the police were called to do a welfare check. He had been hit in the head with a hammer 27 times, and his apartment was ransacked. The murderer and her accomplices took two television sets, a microwave oven, his gold lieutenant’s bars and his car.

“The stolen car helped the police find the killer,” Susan DuBois said. “We had a Verizon app called Hum that showed us the car’s location. The police recognized the address right away as a drug and sex trafficking house. When the police got there, everyone started running, and the two men they caught turned the killer, Taylor Elkins, in.”

As the family tried to process their shock, grief and anger, they also dealt with preparing for Elkins’ trial. The Sebastian County prosecutor believed Elkins, a 22-year-old mother of two, might make a juror “think she’d be OK if she found Jesus,” Susan DuBois said.

“I told the prosecutor I was leaning away from the death penalty. She gave us some options, and we chose to offer a plea deal on (first-degree murder) of 40 years to life. She (Elkins) accepted the plea and will have to serve at least 28 years.”

The family submitted impact statements at Elkins’ sentencing in January 2020.

“I went on the stand first and showed pictures of Dad,” Theresa DuBois said. “We presented my son Nicholas’ written statement. We had lived with Mom and Dad for a number of years, and he was very close to his grandpa.”

“In my impact statement, I said, ‘I pray you find Jesus before you leave this earth because it’s the only way you’ll find heaven,’” Susan DuBois said.

The family, all Christ the King parishioners, pray for Elkins and her children, who have been in their father’s custody.

“My church family comes up and tells me they are praying for us, and I tell them ‘Pray for her,’” Susan DuBois said. “One day at Mass, when we were saying the ‘Our Father’ and got to the part where we asked for forgiveness, I got chills. Father Juan looked at me funny, and I said, ‘I found the real reason for the Our Father,’ and he said, ‘Oh, Susan, you’re too good.’”

“The Murder Tapes” will appear on Investigation Discovery, but no airdate has been announced.

A Catholic you want to know: Mary Charlton