First class of deacons began ministry in state 40 years ago

After six years of formation, 47 men are preparing to be ordained by Bishop Taylor in 2022 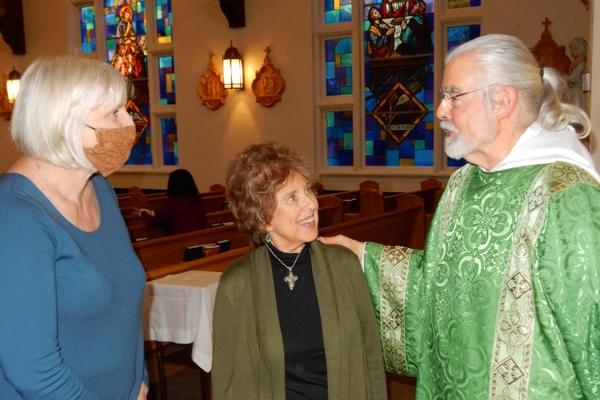 James Keary
Deacon Mike Cumnock, who was ordained a deacon 35 years ago this year, talks with Jonne Rosenau (center) and Sheila Hansen after Mass Nov. 6 at St. Mary Church in Hot Springs.

James Keary
Deacon Mike Cumnock, who was ordained a deacon 35 years ago this year, talks with Jonne Rosenau (center) and Sheila Hansen after Mass Nov. 6 at St. Mary Church in Hot Springs.

For 40 years, Catholic men in Arkansas ordained to the permanent diaconate have made a difference in the lives of their fellow parishioners.

Since 1981, 134 men have been ordained, with an additional 38 deacons who were ordained elsewhere and have served the diocese.

“We’re called to continually form our lives toward Christ, and so our formation is ongoing. The Church survived so long without the permanent diaconate, but they had the transitional diaconate intact,” with seminarians ordained as transitional deacons before their priestly ordination, said Deacon Tim Costello, diocesan minister to deacons. “A lot of people want to say that it’s to help with a shortage of priests, but that’s not why the diaconate is here. It’s in its own self where our men are called to this ministry. And it’s what it says it is, a permanent diaconate.”

The next class of deacons is currently forming. Those who feel Christ’s call to discern the permanent diaconate can sign up in January for the next class to be ordained in 2028.

Permanent deacons can proclaim the Gospel, preach a homily, serve at Mass, as well as baptize, lead the faithful in prayer, conduct wake and funeral services and witness marriages, according to the United States Conference of Catholic Bishops. Deacons often lead or take an active role in parish or community ministries like RCIA, Scripture study, marriage preparation, prison and hospital ministries.

One of the pivotal moves of Vatican II was the restoration of the permanent diaconate in the life of the Church. In St. John Paul II’s 1987 address to permanent deacons in the United States in “The Heart of the Diaconate Servants of the Mysteries of Christ and Servants of Your Brothers and Sisters,” he stated that it “is the Church’s service sacramentalized ... This is at the very heart of the diaconate to which you are called: to be a servant of the mysteries of Christ and, at one and the same time, to be a servant of your brothers and sisters.”

A permanent deacon is an ordained minister of the Church and called to serve in the word, sacrament and charity. A candidate can be single, married or divorced, but would need an annulment. They must be 35 years old at the time of ordination. Open only to men currently, Pope Francis announced in April 2020 a new commission to study the question of a female diaconate in the Church.

It is a six-year process that includes a year of discernment before applying. Wives of candidates also have to attend the monthly weekend classes with their husbands.

The English program is taught by faculty from St. Meinrad Seminary in Indiana, who presents in-person courses at St. John Center in Little Rock and online courses for 11 months over five years. The Spanish formation program is presented by diocesan clergy and laity at Subiaco Abbey with in-person classes for the same duration.

“I think whenever we do the will of God, we have an inner peace that really can’t be moved. And so that was Jesus’ will to suffer and die for us on the cross. And if this is God’s will, that we be a deacon, then we should answer that call and experience that peace,” Costello said.

Permanent deacons can proclaim the Gospel, preach a homily, serve at Mass, as well as baptize, lead the faithful in prayer, conduct wake and funeral services and witness marriages, according to the United States Conference of Catholic Bishops. Deacons often lead or take an active role in parish or community ministries like RCIA, Scripture study, marriage preparation, prison and hospital ministries.

Costello said 70 active deacons are serving in the diocese in 44 parishes, serving about 118,000 parishioners. In the current permanent diaconate class, set to be ordained next year, there are 47 candidates, which will increase the number of parishes served to 51, reaching 130,000 Catholics, or 84 percent of parishioners.

“I’d tell them to really pray about it a lot and include their family in the thoughts and the discussions and everything about it. It’s really a family matter,” he said for men who feel the call.

Pauline Jegley said they were both immersed in service at Our Lady of Holy Souls Church in Little Rock, as she was principal of the school. She cautioned that the wives should find their own path in parish life and not feel pressured.

“Just because your husband is a deacon doesn’t mean you’re a deacon as well. You do what you can do and be supportive, but he’s the one that’s going to ultimately serve in that capacity,” she said. “It has to enhance your marriage; it can’t destroy it. It can only add too. It should be something you both agree on.”

Five active deacons and three senior deacons from the second class, ordained in 1986, are still alive, including Deacon Mike Cumnock, who serves at St. Mary Church in Hot Springs. Cumnock, who spent his career as a licensed psychotherapist and fostered 14 children along with his wife Sarah, said after the changes of Vatican II, deacons helped bridge the divide between the laity and priests.

“I hope that every day I come in contact with the people, I’m a connection to mercy; God’s mercy,” he said.

Cumnock enjoys working with youth, families and engaged couples the most, recalling ministering to a woman with terminal cancer who struggled with family relationships, the Church and wanted to be “cured.”

“It kind of came down to she was healed, but not cured. And she recognized the difference. She said, ‘I feel really good in the Church now,’ and her kids were with her when she died, and she was able to reconcile with her husband. It was really good,” Cumnock said. “I’m absolutely convinced God put me in that situation, and she said, ‘I don’t’ know anyone else that could have helped me through this.’”

Marc Rios has a countdown app on his phone, counting down the days to his permanent diaconate ordination June 11, 2022.

“I’m called to service. I’ve always been service-oriented in the light of Christ. It felt like a natural transition to how I lived my life before,” Rios said.

Rios is the resident manager of St. John Manor, a home for retired priests in Little Rock, and his wife Tracy works part-time helping the priests. Rios, a parishioner at the Cathedral of St. Andrew in Little Rock, admitted he was nervous about the classes after graduating from college 20 years prior but was eased into the process during his year of discernment.

Costello said he hopes future diaconate classes grow to include more bilingual men who can serve both the Hispanic and Anglo communities in the future. There are 11 Spanish speakers in the 2022 ordination class.

Deacon Marcelino Luna, associate director of the diocesan faith formation office, was the first bilingual deacon ordained in 2002. But it wasn’t until 2012 that a full class of bilingual or Spanish speakers, 14 out of the 40 in that class, were ordained.

Deacon Elías Rangel Flores, part of the 2012 permanent diaconate class, said he and his wife Maria Del Carmen moved to Berryville in the early ’90s and didn’t realize there was a local Catholic church for a few years. At the time, there was no Spanish Mass or ministries. Now, with bilingual priests and in his ministry as a deacon, people from various Latino cultures can ask questions or have the sacraments in their native language.

“It’s very important the people in that culture teach and talk to them about evangelization in their language, and they feel really comfortable about it,” Rangel said.

Costello warns all deacons not to get “wrapped up in all this church stuff” to the detriment of the family, so the ministry can successfully continue.

“When we were going through our priorities -- God, family, work and then our ministry --- sometimes we get God mixed up with our ministry or church,” Costello said. “And we have to have that relationship with God to be able to give Christ in our relationships, and the very first one is our family.”

Ministry of priests, deacons is a life lived for others