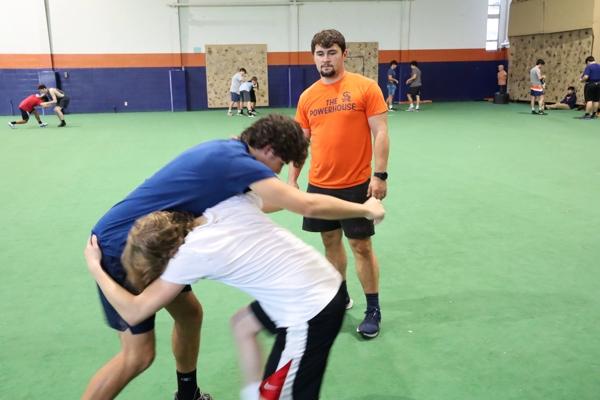 Dwain Hebda
As they prepare for their first year of competition, head wrestling coach Andrew Cannon helps wrestlers with their technique during practice Nov. 16 at Subiaco Academy.

Dwain Hebda
As they prepare for their first year of competition, head wrestling coach Andrew Cannon helps wrestlers with their technique during practice Nov. 16 at Subiaco Academy.

When Andrew Cannon came to Arkansas five years ago, it was to wrestle for the squad at the University of the Ozarks. He landed at Subiaco Academy last August in part in the name of wrestling, specifically to teach others to do so.

“From the beginning, when I got offered the job, they said at some point they wanted to start a wrestling program,” he said. “Of course, that got delayed last year with everything going on with COVID. But we’re super excited to get things going this year.”

Cannon, a Texan who grew up in Georgia, had a few hurdles to get over to get the Trojan program up and running. Supply chain problems delayed the delivery of their wrestling mat, so athletes had to focus solely on conditioning until early November.

But COVID also gave athletes the chance to kick around the idea of giving wrestling a try, resulting in an impressive number of signups. Compared to waiting for the mats to arrive, it’s not a bad trade-off, all in all.

"This year, our first year, we have 27 kids, and they’re so ecstatic about it."

“The main thing that impresses me is the fact that we have so many kids in a first-year program,” said assistant coach Kinzer Matjazic. “I grew up in a school that had been wrestling for 30, 40 years, and we would still barely have a full team. Some years we would be missing three or four kids. This year, our first year, we have 27 kids, and they’re so ecstatic about it. When I was in high school, there would be kids, ‘Oh, I don’t want to do this. My parents are making me do it.’ I don’t think we have one of those kids. All these kids want to do it because they want to do it.”

“COVID definitely played in my favor in that respect,” Cannon said. “There are kids who were very interested in wrestling, and having that whole year for guys to get to know me and get to know what I was about and seeing me coach other sports, it got kids to buy in.”

Admittedly, much of the talent is of the raw athleticism variety, but Cannon and Matjazic were pleased to find the cupboard wasn’t completely bare of wrestling experience.

Senior Sebastian Heft, the California transplant, said having an opportunity to wrestle in his final year puts the cherry on top of an enriching experience at the school.

“Subiaco has been the best three years of my life,” he said. “Wrestling is one of the best sports I’ve done in my 17 years of life. So, I was joyful, excited.”

“At an all-boys school like this, it’s a great sport to have. We have such a big turnout on a first-year program; it’s a major thing. It looks really bright for our future.”

Experienced or not, Heft isn’t dancing around his expectations for the Trojans’ inaugural season, either.

“I want to see us go to state this year,” he said. “As a first-year program, I think making it to state would be amazing. Coming into the school, being a new program, placing at state this year will be major to help us build a bigger team for next year and to help the program develop.”

A prediction like that might be written off as mere bravado until you realize Coach Cannon is of the same mind. He said the power of numbers could not be overstated in wrestling, and Subiaco’s full roster is an advantage.

“This is my first time coaching an actual high school team, but I’ve been in the coaching world for a while, and I’ve coached club teams from Arkansas, Oklahoma, Georgia,” he said. “I’ve been able to coach guys who were national champs and ended up getting ranked on the world level at very young ages. So, I’ve seen success, and I know what that looks like. The goal here is to win the state title the first year, and we have a very high chance to do that because we have a full roster.

“We compete in Class 1-4A, and that hasn’t quite developed in wrestling yet; there’s not a bunch of teams that have full rosters. Last year, the team that won team state only had 10 kids. So, if we bring a full roster of 14 kids, we’re automatically getting 24 points just for showing up. We’re expecting big things this year.”