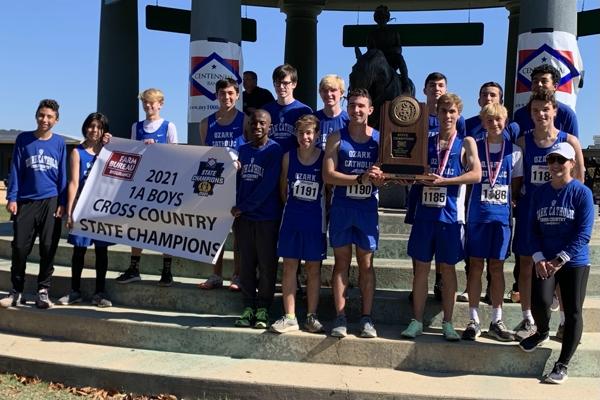 It’s something of a misnomer to say the Ozark Catholic Academy boys cross country team was a dark horse to be the first Griffin squad to bring home a state title. When you’re dealing with a school as new as the three-year-old OCA, every team in the athletic program is, to one degree or another, finding its footing.

That said, not even the cornerstone runners of this championship squad who showed up for summer workouts would’ve predicted they’d be hoisting championship hardware in just a few short months.

“During summer practices, we would go to a track in Springdale, and we would look at each other and not talk because none of us knew each other,” said Isaac Pohlmeier, the freshman phenom who placed second in the 1A state meet in Hot Springs. “By the end of the year, we’re joking around. We know each other and can say stuff to each other. We trust each other, and that just makes me feel really good. I would not have wanted to win the state championship with any other team.”

Senior Hayden Poe agreed. Last year the Griffins were dead last at state, and the worst-to-first transformation has left him with the tone and look of someone still in shock over how much the team achieved so quickly.

“I think once the season began and they started running races, they started seeing what that summer work had done. When we were running in 98-degree heat, and I was bringing frozen washcloths for them and I had them jumping rope, running hills, doing all that, I would say, ‘Trust the process, boys. Just trust the process.’ Then we got to the meets, and they saw they were stronger, and they were more conditioned. I think that helped, definitely.”

“After we ran the Chile Pepper (Cross Country Festival in Fayetteville) in the middle of the season, I remember thinking maybe we do have a chance to do pretty well in state or something like that. I remember I heard a whisper of it from another kid, too. And that’s definitely when our times started to pick up, and everybody was really starting to think more as a team.”

The squad cruised past Ouachita High School of Donaldson in second place and Founders Classical Academy of Little Rock in third for the team title.

“I think once the season began and they started running races, they started seeing what that summer work had done,” head coach Alesia Schaefer said. “When we were running in 98-degree heat, and I was bringing frozen washcloths for them and I had them jumping rope, running hills, doing all that, I would say, ‘Trust the process, boys. Just trust the process.’

“Then we got to the meets, and they saw they were stronger, and they were more conditioned. I think that helped, definitely.”

Three of the five state place winners ran a PR at the state meet, while Connor and Pohlmeier were a step slower than their career-best. Pohlmeier was only 00.05 off his best time, and considering the talent of the 15-year-old product of St. Joseph School in Fayetteville, that’s generally bad news for the field.

“Going up to the state meet, I knew there were two kids ahead of me that had better PRs, a junior and a senior, and I was projected to get third,” he said. “My goal was to run under 18 and try to get second. I’d raced against the senior the previous week at districts and beat him by about 22 seconds. So, the race starts, and I get out normally with the senior, and then I’m waiting for the junior, but then the junior never comes.

“So now, I have a chance to get first, so I’m going to stick with him and run my best race to see if I can beat him. I did that for a pretty long time but running that fast for only the second time that year kind of put a toll on me. I got really tired by about the two-mile mark, but I knew I could keep on going.”

Poe ran completely out of his mind at state. His time beat his season average by a full minute and was better than any other of his times during the season by at least 25 seconds. The final meet of his last season bested the first meet of the year by two full minutes, which in running terms is an eternity.

“I felt good before the race. I was more motivated than I ever have been at that meet,” he said. “At conference, I was motivated, but I was also really nervous. I think at state I put that nervousness behind me. I know I was getting emotional before the race because, for me and the other seniors, it’s our last race and just knowing that we had a shot to give these younger kids a state championship, I was definitely motivated.”

As back loaded as the program is with underclassmen — only three runners graduate and 10 of this year’s 14 athletes are freshmen and sophomores — the Griffins have the makings of a dynasty on their hands. For athletic director Cody Vaught, it’s been something to see.

“Coach Schaefer has high expectations, and she’s highly competent. That’s the start of a good program, in my opinion,” he said. “You have to have somebody who has a good work ethic and knows what they’re doing. That’s going to be a lethal combination for success.

“I started the program four years ago with Beth McClinton, having never coached cross country. We just were trying to get a program developed. From where the program started to see it now is amazing.”