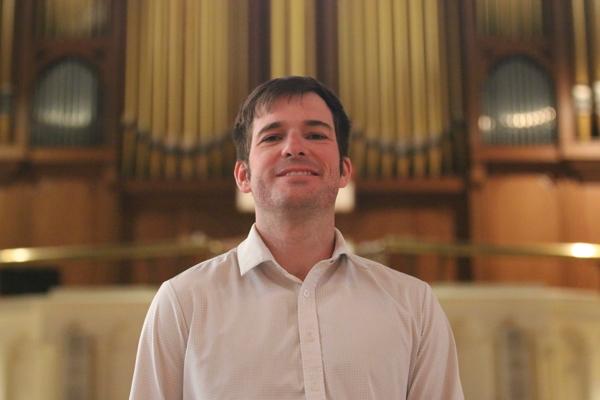 Chris Price
Beau Baldwin, pictured here Nov. 19, decided against a career as an accountant and followed his first love, music. Today, the 35-year-old brings music to the Masses as organist and director of music at the Cathedral of St. Andrew in Little Rock.

Chris Price
Beau Baldwin, pictured here Nov. 19, decided against a career as an accountant and followed his first love, music. Today, the 35-year-old brings music to the Masses as organist and director of music at the Cathedral of St. Andrew in Little Rock.

Why You Want to Know Beau: Beau Baldwin grew up in Little Rock and Fayetteville and went to the University of Arkansas to study accounting. After he earned a degree and it was time to start his career, he realized how much he “absolutely hated accounting.” He returned to his first love, music, and when the position of organist and director of music at the Cathedral of St. Andrew opened in 2015, he jumped at the opportunity to lead the lifting of voices in praising God.

I feel the closest to God making music. My vocation is Church music. I approach it very methodically. I’m always asking, “What’s the best we can do?” I'm always pushing the envelope, like, “OK, we did this last year, and I want to continue with the levels of difficulty.” I am going to make the music the best it can be using all my musical skills and knowledge of the history of Church music to enhance the readings and the overall experience of the Mass. I get to work with the cathedral choir, which is a mostly professional group of people that can sing really hard music, whereas a lot of parishes have to deal with what they have, but here it's actually the art of making music, putting together a well-executed music program and then seeing the final result that brings me closest to God and inspires my faith life.

How did you get your job

I was going to the University of North Texas in Denton, which is about 30 minutes north of Dallas, finishing my music degree and this job at St. Andrew had come open at the end of the summer of 2015. People encouraged me to apply, but, at that time in life, I wasn’t really sure if I wanted to move back to Little Rock. After contemplating it, I was like, “Oh, why not apply?” I came in to interview and was like, “Oh, this seems to be a really good deal.” So, I accepted the position in mid-August and started Oct.  1, 2015. I’ve been here for a little over six years now.

How did you get started playing music?

I went to Holy Souls (in Little Rock) as a child and started to really listen to music at church and found it interesting. At some point, I got a keyboard and was able to pick out melodies by ear. In second grade, I started to take piano lessons and continued through the seventh grade. That’s when the organ bug bit me. I started taking formal organ lessons in eighth grade here in Little Rock at Pulaski Heights United Methodist Church in Midtown. That’s when I became really interested in playing the organ.

What is it about the organ that makes it so spiritual and so good for Church music?

Most organ music is found in the church. You’ll see an electronic organ, like a Hammond B3, in rock bands, but like the majority of organ music is in the church. Pipe organs were originally created in the 1300s and became more complex through the 1500s, 1600s and 1700s. The growth of the organ was kind of in line with the Renaissance era Church. They grew up together. Organs predate the piano by a couple of hundred years. Pianos are smaller so they’re everywhere. You can hear the piano at church, but you can also hear it in the home, in the concert hall or at the piano bar while you’re drinking beer. The organ is very uniquely suited to the church.

Why are you drawn to the organ?

The organ is acoustic naturally and is really the only instrument without speakers that can make the same amount of noise that a full symphony orchestra can. It’s like you have an orchestra at one person's fingertips. The organ at the Cathedral is certainly the best pipe organ in a Catholic church in the whole state. But there’s a very unique marriage of a great organ in a really nice acoustical space. It’s good on a national level. It's a major treasure that we have that I think a lot of people like to listen to as they worship. The organ can be super soft and kind of mystical. It can also be very happy and light or very loud and sort of stern. When it fills the building, it’s like the voice of God.