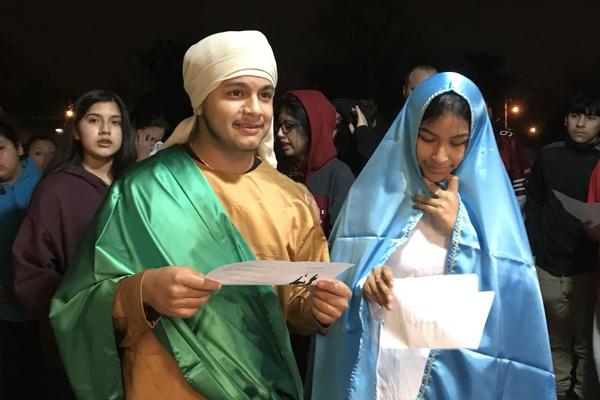 The Latino tradition of Las Posadas or “The Inns,” is more than just the reenactment of Jesus and Mary searching for a place for Mary to give birth to Jesus. It is celebrating culture, tradition, but ultimately teaching the younger generations the importance of prayer.

“We need to teach them our traditions because if we don’t teach them, they will disappear,” said Maria Luna, director of faith formation and secretary for Hispanic Ministry at Our Lady of Good Counsel Church in Little Rock. “It is something good for the family and for the kids to learn is why I say, ‘Well, if we don’t teach them, on the day we die, there is nobody to pray for us.’”

Las Posadas, which is celebrated in several Latin American countries, begins Dec. 16. The nine-night novena ends on Christmas Eve. Each day a different family waits inside their home as pilgrims journey to their home carrying statues of Joseph and Mary or have children dress up. They knock and sing the traditional “Pidiendo Posada” song, asking for shelter three times, as the host family inside denies them entry until the third time.

They are then invited in, singing more traditional songs and praying a rosary. It is then followed by a meal and candy for children. Sometimes there’s a piñata with seven peaks, representing the seven deadly sins, said Father Ramsés Mendieta, pastor of St. Barbara Church in De Queen and St. Juan Diego Church in Wickes.

“For the Latino mindset, it’s so important because the devotions, just like Our Lady of Guadalupe like we’re approaching (Dec. 8) or the processions around Holy Week or the Presentation of the baby Jesus, the devotions also connect the person to their roots. The devotion, it’s something that’s connected to the faith and the faith is connected to our homeland.”

“That’s part of the origin of the posada. Looking at the history, it began with an Augustinian priest in the 1500s whenever the first Spanish conquerors came to Mexico along with the religious orders the Franciscans, Carmelites and Augustinians,” Father Mendieta said. “The Augustinians tried to find ways to catechize the natives of Mexico so they could know the Gospel and one of the ways was the posada.”

This reenactment is repeated for nine days, ending with Christmas Eve Mass. The last posada often takes place at the parish, with the reenactment and rosary before Mass. At the end of Mass, families bring their baby Jesus statues to be blessed by the priest. They arrullar or “lull,” rocking the baby with a blanket as the choir sings.

At Good Counsel, Luna said they have a large baby Jesus that the Hispanic ministry donated to the church. She picks a different family each year to rock that particular baby, who is placed on a tray with candy after the blessing.

“The people go in front to adore the baby. They kiss the baby and get the candy,” Luna said.

The traditions can vary by country. Luna said in Mexico, where she grew up, instead of nine different houses, one family would host nine different families each night.

Since she’s been leading the posadas the past six years, she’s made sure the children actively participate in the rosary.

Father Mendieta said in his native Nicaragua, he always participated in Las Posadas as well as several other devotions.

“We have the Masses in the evenings and after that we’d go in procession to the house that would host the posada. The pilgrims were Mary and Joseph, we’d have two children. We’d have a song and the rosary, the sharing afterward. It was really nice,” he said.

The Legion of Mary would lead the posadas, and it was one of the ways he learned to pray the rosary.

“I think one of the things that really sticks to my mind up to this day was the opening song for the posada. The song, it’s very traditional, it is in Mexico and Nicaragua. … I remember how exciting it was to be let inside the house,” he said.

St. Raphael Church in Springdale has done it for at least 10 years, with about 150 people participating, said Sergio Garcia, Hispanic ministry coordinator.

“We actually first do the rosary,” Garcia said. “At the end, we do the walk around the church with … prayers and make a little walk with the (statues) of José and Maria.”

Different parish groups act as the host families for the nine nights.

“I think the faith,” Garcia said of what is the most important part of the posadas. “That helps them to keep faith more strong and reminds them how Jesus came to the world and how he started his adventure in this world for us.”

Luna said about 35 to 40 people participate from Good Counsel. Nine host families are chosen, and the pilgrims knock at three different doors of a home, which can be a back door, garage door and a front door. Some families rent a giant tent to host the posadas outside.

With each mystery of the rosary, Luna said they sing villancicos, or Christmas carols.

“We have a book for the posadas, and every night has a reflection,” she said, adding that the statues of Jesus and Mary stay at the host families' home, who take them to the next home the following night.

Father Mendieta said both his parishes celebrate Las Posadas, with about 100 participating at St. Barbara and about 20 to 30 for the smaller parish, St. Juan Diego. They begin with Mass and then process to the host family, which can be a home or a local business owned by a Hispanic Catholic family. The rosary is prayed and songs are sung, with the children receiving aguinaldos or bags of candy. The statues of baby Jesus are also blessed at the Christmas Eve Mass.

“For the Latino mindset, it’s so important because the devotions, just like Our Lady of Guadalupe like we’re approaching (Dec. 8) or the processions around Holy Week or the Presentation of the baby Jesus, the devotions also connect the person to their roots,” Father Mendieta said, adding “The devotion, it’s something that’s connected to the faith and the faith is connected to our homeland.”