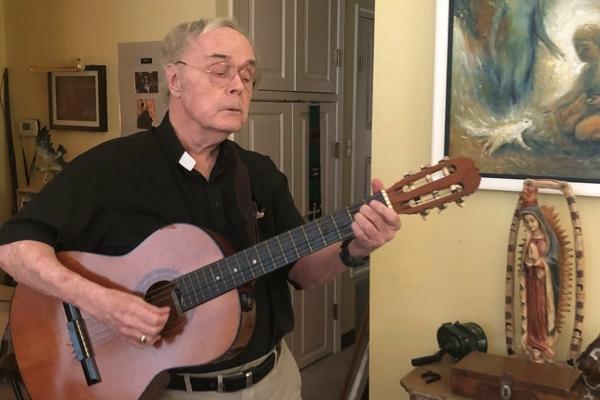 With vows of chastity and obedience, the priests of Arkansas have given their lives for the spiritual nourishment of the Church.

The Diocese of Little Rock asks the faithful to remember all the priests who have served the state and donate to a special Christmas collection in all parishes across Dec. 24-25 to support the Clergy Welfare Fund, which provides care for retired and infirm priests.

“The main purpose is to care for and show our appreciation to our priests who spent their lives serving in our parishes,” said Greg Wolfe, diocesan finance director.

“If they have to go into a nursing home, which is the most expensive thing — it can run up to $6,000 a month — the fund pays for it,” Wolfe said. “Sometimes we have someone in a nursing home. One year we had three people in a nursing home, so you just never know how much of an expenditure we’re going to face.”

Currently, the diocese is supporting 17 retired priests, who are known as senior priests.

Wolfe described funding for the fund as a three-legged stool. Diocesan priests do not have individual retirement accounts. Instead, the diocese puts part of their salaries into the fund, which is overseen by a governing board and is audited annually by an outside accounting firm. Additional income is generated from interest collected from $20 million invested in stocks and bonds.

The final contribution is money donated during the Christmas collection. The collection is always the most popular collection in the diocese. In 2019 Catholics donated $521,686, and in 2020 it was $511,239.

“We need the Christmas Collection to cover the expenses for the retired priests,” Wolfe said. “In one year, it takes all of that. It takes those three things, the billings to the parishes, the investment earnings and a good strong donation at Christmas. All of that money goes into Clergy Welfare.”

While the diocese reserves funds for priests who are sick, Wolfe said 95 percent of the money is spent on senior priests.

Many of the diocese’s senior priests choose to live at St. John Manor, which is located on the two upper floors of Fitzgerald Hall on the St. John Center campus in Little Rock. Each has an apartment with a living room, bedroom and private bathroom. They eat their meals in a communal dining room and have a shared living room to watch TV, read and play a game of pool.

There are six senior priests currently living at the manor, with more expected to join soon, said Marc Rios, Fitzgerald Hall’s resident manager, who runs the facility with his wife, Tracy, and Father Warren Harvey, who is also chaplain at St. Vincent Infirmary in Little Rock.

“My main responsibility is to make sure the priests are taken care of,” said Rios, who is a member of the diaconate formation to be ordained in 2022. “For me, it is a ministry. They’ve given their lives to the diocese, so it’s a joy for me to give some of that back to them. We owe that much to make sure that they live out the rest of their life in health, peace and happiness.”

Father Harvey and the Rioses live at the manor and call it a blessing to serve those who have served the Church.

“At dinner one time when we had all our (senior) priests here, we counted all the years of service these priests have given, and it was almost 500 years. That's half a millennium of service to the Lord,” Rios said. “I started tearing up thinking about it. It’s pretty powerful, man. You know, when I look and I see these wrinkled, old hands I see Christ’s hands. I’m thinking how many thousands of times they lifted up the Lord in consecration, you know? It’s impactful to think about what they’ve given, and they still are giving.”

While he said nothing can be taken for granted, Rios believes the faithful will give generously to care for the retired pastors.

“Catholics of Arkansas take care of their priests,” he said. “They couldn’t be taken care of if it wasn’t for the generosity of the diocese, of the people of Arkansas.”

Rios said life at the manor is not extravagant.

“They’re very grateful to have somewhere to live,” he said. “A lot of these priests have nothing. As diocesan priests, they don't have their own furniture. When they move from parish to parish, it’s all provided for them. So, they don’t amass or accumulate a lot of physical property. Sometimes they just come here with just the clothes they have and a few items, so we're able to provide them a fully furnished apartment, someone to take care of their laundry, someone to feed them, someone to clean their apartments. And they’re very grateful.”

Father Ed Graves, 80, is one of the residents. He still celebrates Mass almost every day for the Missionaries of Charity and Carmelite sisters and, on occasion, fills in for a pastor at a parish. While he said he doesn’t have the stamina to run a parish, he said living at the manor allows him to still serve in limited capacities.

“I'm still involved in active ministry, but most of our older priests are not,” Father Graves said.

For years, he planned to retire and live in Memphis with his sister but instead chose to live at the manor.

“This is more conducive,” he said. “I’ve always believed that priests need other priests for support. It’s good to have a place where you can come together with the people of a like-mind. It’s better than being all by yourself. It’s a Godsend to us.”

Rios said the interaction they have is essential to their health and happiness.

“I’ve seen in my pastoral work that once someone elderly gets put into hospice or into a retirement home situation where maybe they don't have that group interaction, they start going downhill really quick,” he said. “Here they have the camaraderie, and Father Harvey, myself and my wife to make sure that there's always interaction. The bishop comes over for lunch most days, and his presence tells us that they're not forgotten. That’s absolutely great. They don't ever feel alone.”