The Gifts of Magi foreshadowed Jesus' life of kingship, divinity, and saving death 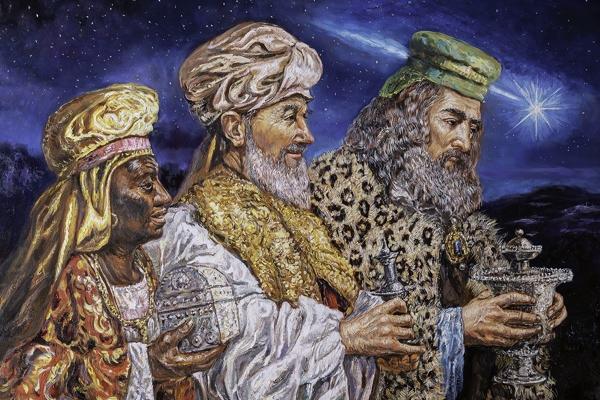 CNS illustration/courtesy Vatican Philatelic and Numismatic Office
An image of the Magi is featured on one of the Vatican's 2021 Christmas stamps. The images on the stamps were painted by Adam Piekarski, a homeless man from Poland currently living in Rome.

CNS illustration/courtesy Vatican Philatelic and Numismatic Office
An image of the Magi is featured on one of the Vatican's 2021 Christmas stamps. The images on the stamps were painted by Adam Piekarski, a homeless man from Poland currently living in Rome.

When the three kings visited the Holy Family on Epiphany, we are told in Matthew 2:11 that they brought gold, frankincense and myrrh.

Gold has kept its value for more than 2,000 years. In early December, the market price for an ounce of gold was $1,781.50, but today, frankincense and myrrh aren’t the commodities they once were. Montana-based Aromatics International sells a pound of frankincense resin online for $41.99, about $2.63 an ounce, while myrrh resin sells for $36.99 a pound or $2.32 an ounce.

Father Jerome Kodell, OSB, former abbot of Subiaco Abbey, said the three gifts have biblical symbolism. The gold  —  symbolizing wealth  —  shows Jesus’ kingship;  frankincense, which was burned as an offering to God, stands for his divinity; and myrrh, an anointing oil and herb used in embalming, foreshadows his redeeming death.

Father Jerome Kodell, OSB, former abbot of Subiaco Abbey, said the three gifts have biblical symbolism. The gold  —  symbolizing wealth  —  shows Jesus’ kingship;  frankincense, which was burned as an offering to God, stands for his divinity; and myrrh, an anointing oil and herb used in embalming, foreshadows his redeeming death.

The three gifts are mentioned throughout the Bible and are ubiquitous in Moses’ story  — gold for the Ark of the Covenant and the Temple’s altar, tabernacle and decorations; frankincense to purify the temple and myrrh to anoint sacred people and objects.

Gold has been used to make art, jewelry and coins for millennia. The first known gold artifacts date to Egypt and Lower Mesopotamia at the end of the fifth millennium before Christ.

Gold is mentioned in the Bible in the Book of Genesis’ description of the Garden of Eden (2:10-14); in the story of constructing the Ark of the Covenant, table and menorah in Exodus 25, and the construction of Solomon’s temple in Jerusalem (1 Kings 6).

Frankincense and myrrh are resins extracted from trees in the Burseraceae family, also known as the torchwood or incense family, said Randy Forst, staff chairman of the University of Arkansas System Division of Agriculture Pulaski County Extension Service.

While both are renewable resources, they were cultivated in limited areas in the ancient world, and their scarcity made them valuable.

“Frankincense comes from the dried sap of Boswellia trees, while myrrh comes from the Commiphora,” Forst said. “They grow in the tropical regions of Africa and Asia and have been used as incense in religious and cultural ceremonies since ancient times.”

Historical records show frankincense, which originally came from southern Arabia, has been traded on the Arabian Peninsula for more than 5,000 years and was a popular Silk Road commodity that was exchanged from the Horn of Africa to China, according to Ulric Killion’s 2006 book, “A Modern Chinese Journey to the West: Economic Globalisation And Dualism.”  It, too, is mentioned in the Book of Exodus (30:34-38) as an ingredient in sacred incense. Leviticus 2:1 says it should be included with offerings for the Lord.

In addition to its spiritual uses, frankincense, which has a sweet, balsamic scent, was most often used in lotions and perfumes  — a godsend to cover odors before the advent of indoor plumbing and regular bathing. It also has antibacterial, anti-fungal and anti-inflammatory properties that reduce joint inflammation, osteoarthritis pain and improved mobility, according to “Frankincense: Systematic Review,” a 2008 article by Edzard Ernst in the British Medical Journal. It was also used to improve oral hygiene and prevent gum disease, making it prized as a medicine in ancient times.

Today, it is estimated that the Church worldwide uses 50 metric tons of frankincense a year for incense at Masses.

According to the World Agroforestry Centre’s tree database, myrrh has also been historically used as a perfume, incense, immunity builder, skin toner and embalming agent by the ancient Egyptians. It, too, has an antiseptic quality used to help heal wounds and was used to aid digestion. Additionally, ancient cultures often added myrrh, which has pain-killing attributes, as an additive to wine.

In Genesis 37:25, the enslavers who bought Joseph from his brothers are thought to be transporting myrrh to Egypt. In Exodus 30:22-29, the Lord tells Moses to make sacred anointing oil with myrrh. In the Book of Esther (2:12), she is given six months of beautifying treatment with oil of myrrh before meeting King Ahasuerus.

In the Gospels of Matthew (27:34) and Mark (15:23), Jesus was offered wine mixed with myrrh during his crucifixion to ease his pain, but he didn’t take it. In John’s Gospel (19:38-42), when Joseph of Arimathea took Jesus’ body for burial, Nicodemus brought “a mixture of myrrh and aloes weighing about 100 pounds” to anoint his body and prepare it for burial according to Jewish burial customs.

Today, myrrh is used to make chrism, the anointing oil used in the sacraments of baptism, confirmation and holy orders.

“The Gifts of the Magi are representative that Jesus is a king; he’s a priest, and they’re preparing for his saving death,” Father Kodell said.