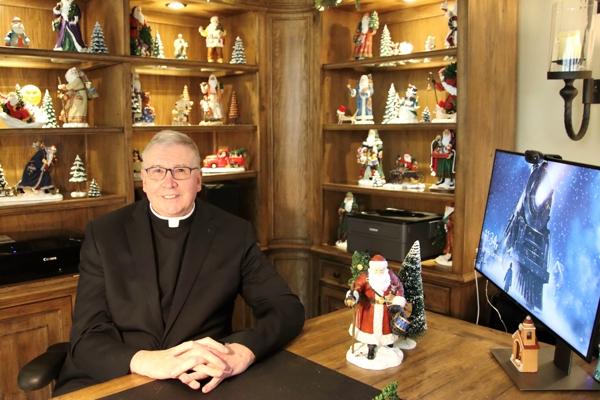 Alesia Schaefer
Father John Connell sits in his office decorated for Christmas Dec. 7. An auction of many of his items from his extensive Christmas collection will be auctioned off in July to benefit St. Raphael Parish in Springdale.

Alesia Schaefer
Father John Connell sits in his office decorated for Christmas Dec. 7. An auction of many of his items from his extensive Christmas collection will be auctioned off in July to benefit St. Raphael Parish in Springdale.

He loves Christmas with a capital “L.” His enthusiasm is contagious as he walks you through years of collections, displays and artwork proving that his passion extends beyond the usual tree trimming.

Father Connell, vicar general for the diocese and pastor of St. Raphael Parish in Springdale and St. Joseph Church in Tontitown, is a bona fide believer in the magic of Christmas. For decades, he has been collecting Christmas pieces that remind him of the wonder of the holidays. His second love is sharing that good cheer with friends, staff and parishioners each year.

“As a seminarian, I would decorate my room with lights and a tree,” he recalled with a twinkle in his eye. “A seminarian friend of mine would tell me that the decorations in my room should reflect the season of Advent,” he said. “I told him, ‘It may be Advent in your room, but it is going to be Christmas in mine.’”

Recently Father Christmas began to ponder downsizing. The 67-year-old pastor and his staff decorated the offices at St. Raphael Church for Christmas but also prepared for a larger “Christmas in July” event where he will auction off a portion of his holiday collection. All proceeds will benefit the parish.

It all began, appropriately, with a gift from his parents of two Father Christmas figurines from the renowned Door County, Wis., artist Pipka Ulvilden. Each year he bought or was given several of the Old World 11-inch Pipka Santas. He now owns 107.

His mother also began gifting him with a framed Christmas cross-stitch that she would spend the year creating. Walking around the office, there are 35 handcrafted pieces of art on display. Ornaments, highly sought-after train sets, pieces from the four different sets of “Department 56” villages, nativity scenes and Lenox pieces all began to accumulate as Christmas seasons came and went.

Father Connell recalls his collecting began in earnest when he was a priest at Holy Redeemer Parish in El Dorado from 1990 to 1994. Houses and accessories from the iconic “Department 56” village multiplied. He began with the “North Pole,” “Snow Village” and “Christmas in the City” series. To date, he has more than 220 collectible houses, many of them limited edition or profile pieces, along with accessories to complete the look of small lighted towns.

In his days as pastor of St. Theresa Church in Little Rock from 1994 to 2009, Father Connell hosted open houses at the rectory where every inch would be decorated.

Recently Father Christmas began to ponder downsizing. The 67-year-old pastor and his staff decorated the offices at St. Raphael Church for Christmas but also prepared for a larger “Christmas in July” event where he will auction off a portion of his holiday collection. All proceeds will benefit the parish.

“I made this decision in the spring of 2021 and decided to help by giving this to the parish as a gift,” Father Connell said.

“I have always loved Christmas,” he said, “but I am trying to simplify my life and instead of many of these items being in storage, I thought it was time to share the joy and in the process help my parish. I just want people to open their hearts and be generous.”

Currently, Christmas decorations are also displayed in the parish office that will be available in the July auction. Four different trees were auctioned already, each one covered in ornaments collected by or given to Father Connell over the years. Two of the Dickens Village series with more than 70 pieces are currently displayed next to the church office. The display will rotate in anticipation of the sale

Of course, not every item is on the auction block. In fact, according to Father Connell, there is enough Christmas for more than one sale.

Besides, Father Christmas cannot part with everything.

“Oh, I am keeping pieces that are still dear to me, like the cross stitch from my mother, the churches from the Village series, the first 10 pieces of the North Pole series, and my first three Pipka Santas, as well as trains,” he admitted with a smile.