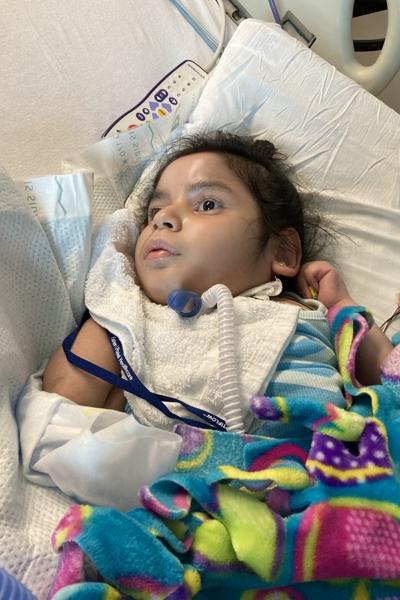 Rosalba Mendoza-Martinez
Nelly Mendoza-Rivera, seen here in an undated photo, was in the hospital several times throughout her life. Her parents were given an adverse prenatal diagnosis and were told their child would not survive. Nelly lived 9 ½ years.

Rosalba Mendoza-Martinez
Nelly Mendoza-Rivera, seen here in an undated photo, was in the hospital several times throughout her life. Her parents were given an adverse prenatal diagnosis and were told their child would not survive. Nelly lived 9 ½ years.

With bright eyes and a big smile, Nelly Mendoza-Rivera was in awe of the world around her, despite being in a wheelchair, nonverbal and eating with the assistance of a feeding tube.

“She didn’t like to be by herself, Nelly. She always liked to have people around her. She loved to watch TV, things that were moving. She liked all those movies that were from Disney,” her mother, Rosalba Mendoza-Martinez, 48, said through a translator. “She liked toys that would have a light to them. To her, it was very gratifying to have a toy that had lights.”

But the last 9 ½ years of memories and medical knowledge gained from Nelly’s life was almost erased. Mendoza-Martinez and her late husband Carlos Rivera went to the abortion clinic in Little Rock on the advice of their doctor because of the unknown extent of the deformities and illness plaguing their unborn child. The baby would likely die in the womb or soon after birth.

But Nelly beat the odds, living a life of suffering and joy before dying Nov. 7.

“We didn’t give this baby much more than a 1 or 2 percent chance of making it out of the hospital. There’s a 99 percent chance as soon as we cut the umbilical cord this baby's life would be minutes to hours.”

“Every single person is there for a reason,” said Maria Maldonado, a 29-year pro-life advocate and parishioner at Christ the King Church in Little Rock, who couseled the couple outside the abortion clinic.

When the couple decided to keep their child, Maldanado and about 50 other pro-life advocates in Arkansas walked along with the family throughout Nelly’s life.

“This story is so special because the child was destined already to die long before she was even in the world,” Maldonado said. “Then she turns around and God left her here for a reason. Look at how many people she touched, how much we learned and how much doctors learned that will touch other people in life.”

Maldonado, a retired teacher at Christ the King School, also worked 17 years as the director of Arkansas Pregnancy Resource Center, located near the abortion clinic. Also known as St. Joseph’s Helpers, the center provides support and supplies to pregnant women. Several people pray outside the abortion clinic and are there to speak with women. Maldonado has trained sidewalk “counselors” to learn how to approach women in a non-threatening way and make sure they know, “Whatever you offer, you have to be able to do it.”

In late spring of 2012, she called out to Rosalba and Carlos in Spanish as they walked toward the abortion clinic.

“When I was already 21 weeks, which was seven months along, I went to the doctor. He said that it was a deformed child, to go ahead and have it aborted. I really didn’t want to accept it. I went into the clinic, but I felt really bad about it,” Mendoza-Martinez said.

The Catholic couple from Memphis admitted they did not want to abort their second child, with Carlos telling Maldonado he believed “A child is a child of God.”

They returned to the clinic the next day as Maldonado and others prayed.

“What changed my mind was the amount of people that were outside of the abortion clinic, and they were praying and telling me, ‘Listen, we have the means to find you someone else that can look at you.’” Mendoza-Martinez said, adding “The impact on me of other people who don’t know me, praying for me and offering that made a difference.”

Dr. Paul Wendel, a recently retired OB-GYN who worked 28 years at UAMS Medical Center in Little Rock and parishioner at Christ the King Church, treated Rosalba throughout the pregnancy. He agreed with other doctors about the grim outcome for the child. He was straightforward.

“We didn’t give this baby much more than a 1 or 2 percent chance of making it out of the hospital,” Wendel said. “There’s a 99 percent chance as soon as we cut the umbilical cord this baby's life would be minutes to hours.”

While Medicaid helped pay for prenatal care and appointments, the sidewalk helpers were there to give money for gas, food, a place to stay and APRC also helped with diapers and baby supplies.

Nelly was born June 19, 2012. Maldonado prayed the rosary outside the hospital room, not knowing if the child would be born alive, and finally heard her first cry.

When Mendoza-Martinez had to care for their 7-year-old son while Nelly stayed at Arkansas Children’s Hospital, Maria Maldonado and her husband Roberto met Carlos halfway between Memphis and Little Rock every other day. Maria picked up and fed Nelly her mother’s breast milk for the three to four weeks she was in the hospital.

Mendoza-Martinez said there were several health issues that plagued her daughter including underdeveloped organs and scoliosis. Nelly had surgery on her colon, urinary tract, heart and trachea when she couldn’t breath on her own. While could not move her own wheelchair, speak or write, Nelly would make sounds and movements to express herself. After a stroke in 2013, she regressed.

“She died; she was not conscious for over 25 minutes. When she regained her life back, she had forgotten a lot of things,” her mother said, including how to swallow.

She lived the rest of her life with a feeding tube.

She once visited the teens in Christ the King’s CYM as a living witness to why Catholics do not believe in abortion.

“You look at her, and she had her little eyes that were always smiling. ... How can they even think about ending a life like this? Even if she only came into the world and smiled and giggled,” Maldonado said. “It’s a very gratifying and humbling job you can do for God to be his tool and be submissive on what you say because he is the only one who knows what’s in the womb of that woman.”

Wendel said though he did not treat Nelly beyond her birth, her life is an example of how God is in control.

“We counsel a mother based on what we see. … When you see things like this happen, that challenges your knowledge. We are always surprised, we can always learn and there are exceptions to all rules and this is what this baby did for us,” Wendel said. “That’s where you begin to understand in God's plan there are miracles and things that defy any science you can understand.”

Nelly’s father Carlos died Nov. 7, 2016, on the way to get dialysis in Mexico to treat his kidney disease — five years prior to the day Nelly died. They were married 15 years. Mendoza-Martinez has worked at a packaging company since, and her son, now 16, helped take care of Nelly.

“Throughout the years the Catholic pro-life community has been helping me through the whole time with food, gifts, things that I could not buy, paying my rent when I was about to to be evicted. Coming, and sending me cards to let me know they’re thinking about me” and Nelly, Mendoza-Martinez said. “They were there with me through the thick and thin, bad times, good times. … And I know I'm not the only one they’re helping. They help women all over.”

Nelly died Nov. 7, within two weeks of her organs beginning to shut down.

Giving Mendoza-Martinez the space to grieve, Maldonado got to work with fellow pro-life advocates.

“I put out an email to the core group of sidewalk counselors I deal with. They all responded, ‘We’ll donate this, we’ll donate that,’” Maldonado said.

A mortuary in Memphis gave Maldonado a “workable amount” for the cremation. Their parish, St. Michael Church in Memphis, agreed not to charge for the service. Calvary Cemetery in Memphis donated a burial plot. Her funeral Mass was Nov. 30.

“No, I would not have chosen abortion because I have learned so much from Nelly,” her mother said. “Nelly put up with a lot of pain and everything through the surgeries, but she was given a special gift to withstand all of that pain she had when she was in the hospital. She was seen by so many people as a child that overcame all these big mountains in her life.”

Maldonado said Nelly’s story is an example of how every life has meaning and the work that pro-life advocates do behind the scenes.

“The thing about all of this is for people to understand it takes a lot of people to help someone who was at the point of ending a life. If we’re not there for them, the other people on the other side all they do is say, ‘They’re not going to have anymore pain, you’re not going to have to worry about this.’ … They miss having a relationship with the child in their own womb and something they can give to the world,” Maldonado said. “Nelly will live. She lives in the hearts of all the lives she touched.”