Tingquist: Priests need to engage young people, listen to their thoughts on the Church 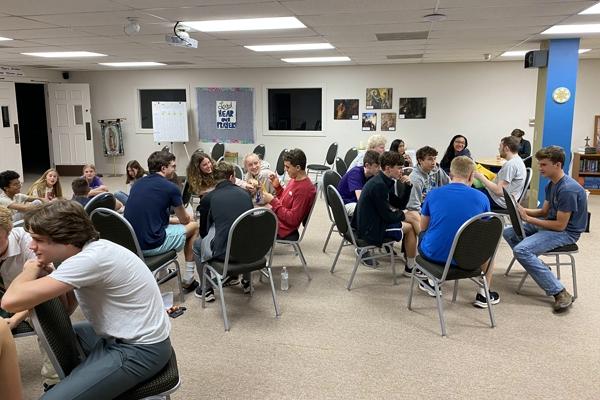 Part 1 of a four-part series on groups of Catholics the Church is striving to listen to during the Synod on Synodality.

From the time she was born, Annie Wendel’s family fostered in her a love of the Catholic faith.

“My family was extremely involved in the Church. We were always the people that sat in the front row every Sunday at Mass. During the summer, my mom would have my siblings and me serve at daily Masses at 7:50 a.m. We did it probably twice a week,” she said, along with praying the Divine Mercy Chaplet every Friday in the adoration chapel at 3 p.m. after classes at Christ the King School in Little Rock.

But she still wound up being disconnected to her faith. She found her way back, but it isn’t always the case for teens.

“My best advice would be to live your own faith the best that you can with joy because your teens are watching you closely. Even if they don’t always act like it, they are. Pray of course; go to Mass together as a family. It needs to be a priority.” - Bevie Davies, youth minister at Christ the King Church in Little Rock

Teenagers and young adults are one of a handful of groups the Diocese of Little Rock will be hosting listening sessions with for the "Synod on Synodality,” launched by Pope Francis to better reach out to marginalized groups. “Journeying Together: Communion, Participation and Mission” is the diocesan theme.

“A parent's responsibility, number one, is to teach their children what should be our priority in their life. And so that priority obviously has to start with their relationship with God, because everything here is transitory,” said Liz Tingquist, diocesan director of youth and campus ministry.

According to a Pew Research Center study in 2020 looking at the religious lives of teens and their parents, four in 10 teens, aged 13 to 17, said they attend religious services at least once or twice a month, but those who said they pray daily was at just 27 percent. Belief in God with absolute certainty was 40 percent, and considering religion to be “very important” in their lives was at 24 percent.

Tingquist said lack of parental involvement, peer pressure and misunderstandings about the Church’s teaching on LGBTQ issues pull teens away from the faith.

For families, it should be more than going to Mass on Sunday. Participating in a parish ministry together as a family, doing social justice outreach, having family prayer time and making sure teens attend the parish youth group at least a few times creates a culture of faith.

“A parent (can say), ‘I understand that, but let's set you're going to go two or three times, and your attitude has to be open to what you experience.’ And then maybe even contact the youth minister,” Tingquist said.

Bevie Davies, youth minister for 16 years at Christ the King Church in Little Rock, said children can fall away as early as fifth grade. While Davies doesn’t have exact numbers, she mails more than 300 information packets about CYM and has about 35 to 40 high schoolers consistently attend on Wednesday nights.

“I would just say in general it’s the same as adults  —  it’s distractions and busyness. Our teens are busy; they are also under a lot of pressure. I see the anxiety,” Davies said. “It used to be just sports keeping them busy. I think it’s more than that now. It’s the pressure to perform, to get those scholarships whether from sports or academics. That priority level is down (for CYM). They are just trying to keep their head above water.”

Davies said the 13 members on her Youth Advisory Team will take the extra time welcome to a newcomer. If a teenager still feels uncomfortable, there are other ministries in the Church like scouting.

“I think we have to really help our kids understand the source and the summit of our faith is the Eucharist. And they have to believe that with their heart and experience that,” Tingquist said.

Social media and peer pressure can also pull teens away from the Church.

“It was surprisingly easy to break away from it because whenever you don’t put in the effort, with anything, you fall away from it. I had these friends and they had no connection to the faith and while my family still prioritized it, when I was at school … I started to become the one who would complain to my friends that I have to go to Mass or complain that my mom was making me go.”

Wendel decided to refocus on her faith in high school, but it left her friendless in her freshman and sophomore years. God eventually led her to faith-filled friends.

“If I hadn’t had my mom pushing me to go to the youth events and go to Mass … and always making sure that prayer is at the center of our family life, I think if I didn’t have that, if she had given up when I stepped away … I definitely would not have gone back to the faith,” Wendel said. “I needed that push because that laid the foundation for me to come back. In high school, my faith became my own and I never would have had that if my parents hadn’t set that foundation.”

LGBTQ issues are also a major reason why young people leave the Church. The Catechism of the Catholic Church refers to homesexual relations as “intrinsically disordered.” (Catechism, no. 2357) But it also states “They must be accepted with respect, compassion and sensitivity. Every sign of unjust discrimination in their regard should be avoided.”

What can be done

It’s important for parents to follow up with a discussion, whether it’s about a homily or what they did in youth group. Parents should also be vulnerable and share their own triumphs and struggles with faith.

“My best advice would be to live your own faith the best that you can with joy because your teens are watching you closely even if they don’t always act like it, they are,” Davies said. “Pray of course; go to Mass together as a family. It needs to be a priority.”

During the Search retreat in December, Wendel, a senior at Mount St. Mary Academy in Little Rock,  said she and other leaders were told of an attendee whose mother wanted her to go, but the teen did not. One of the team leaders texted her ahead of time and made sure they were in the same Search group.

“She had an amazing time,” Wendel said. “I think what parents need to do is make it so their kids have a choice, but also I think it’s the people around them. For me, I always fought my mom about going to these things because I didn't have friends who wanted to go with me. But knowing that other people actually want to get to know their faith and know God is a big pull for the youth.”

Every parish, no matter its size, should have an active youth ministry program, Tingquist said.

“They are being talked to a lot. We need to provide opportunities to be listened to and that starts at home and youth ministry as well,” Davies said. “I think what is so beautiful about this synod is the Church listening to us.”

If a parish cannot pay for a youth minister, the priest must make sure volunteers have the necessary catechesis. Consistent youth Masses, even once a month, with praise and worship music is also vital.

“We don’t have priests who come into our youth groups a lot and really talk to the kids and make us feel like we’re a part of the community. It's not just adults who cater to the Church. We are the next generation for the Church,” Wendel said. “I think it’d be amazing if we could have more encounters with priests and seminarians and have more of a voice within the Church.”

Having occasional homilies that speak to a younger audience would be more inclusive.

“I think it'd be really nice if priests maybe would realize that they need to kind of talk more at that basic level for young people, not be so theological and esoteric all the time,” Tingquist said.

For the synod listening sessions with the youth, Tingquist, who was appointed by Bishop Anthony B. Taylor to be a leader in the diocesan synod process, said she hopes all priests, particularly older priests, attend those sessions and listen to what the youth have to say, rather than just reading the reports that will follow.

“Pray over it and figure out, ‘What’s at least one thing I can do for our parish to be more appealing to young people?’” she said.

Do you have thoughts, opinions or a story to share? The synod process is about listening. Click here to share your experience in the Catholic Church.