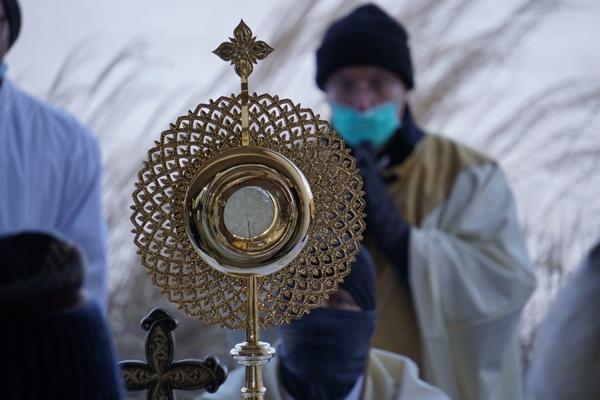 Malea Hargett
Bishop Taylor prays as the holy Eucharist is displayed in a monstrance for the eucharistic procession before the 2022 Mass for Life in Little Rock. The diocesan Respect Life Office Mass hosts the Mass annually.

Malea Hargett
Bishop Taylor prays as the holy Eucharist is displayed in a monstrance for the eucharistic procession before the 2022 Mass for Life in Little Rock. The diocesan Respect Life Office Mass hosts the Mass annually.

Kneeling on the stone-tiled floor of the Statehouse Convention Center in Little Rock, 19-year-old April Conant’s hands were upturned in praise, as she, under her mask, mouthed the words to “Rest on Us,” while youth from Team Jesus performed. Next to her, donning a matching black mask, Darci Contreras, 18, also sang along.

The two did not know each other, but each came to the eucharistic procession and Mass for Life for the first time.

“Just to pray over the pro-life movement in a way I haven’t done before,” said Conant, a University of Central Arkansas in Conway student and member of the Students for Life chapter. She said the last station of the procession was the most powerful, as that song had popped in her head that morning. “I think it’s also to show others this isn’t just a movement for older people, adults. This generation cares for life.”

The annual Mass was celebrated by Bishop Anthony B. Taylor and concelebrated by Father Mark Stengel, OSB, Jan. 16. Seminarians and deacons Danny Hartnedy and Richard Papini assisted. It is hosted annually by the diocesan Respect Life Office.

“God’s gift of life is sacred, regardless of a person’s usefulness to society. It doesn’t become sacred once a mother chooses to carry her baby to term — and not if she doesn’t,” Bishop Taylor said.

Attendance at 100 people was slightly higher than last year, but much lower than the typical 800 people who attend the Mass. In the past, teens from the youth retreat Weekend for Life made up a large portion of attendees. The retreat was canceled this year due to the surge in the omicron variant of COVID-19. .

This year marked the 49th anniversary of the federal Roe vs. Wade decision that legalized abortion.

In Bishop Taylor’s homily, he invited the crowd to focus on two “overlooked truths” — life is still sacred after birth and no child in the womb will be safe “until we reject everything that threatens human life or degrades human dignity.” He emphasized the sacredness of immigrants, death row inmates, the poor, those with addictions, the elderly, as well as children in the womb, and to reject societal norms like contraceptives.

“God’s gift of life is sacred, regardless of a person’s usefulness to society. It doesn’t become sacred once a mother chooses to carry her baby to term — and not if she doesn’t,” Bishop Taylor said. “It’s sacred already, regardless of what anybody thinks. If you cut away any part of the seamless garment of the Gospel of Life, it all begins to unravel.”

Respect Life Office director Catherine Phillips described the Mass attendees and the roughly 50 people who processed before the Mass as “small, but mighty.” Ten people attended the Hearts for Life conference the night before, despite the winter weather.

“God moved their hearts and they responded to his invitation to show up,” Phillips said.

With temperatures in the 30s, the faithful processed for about an hour, praying as the Eucharist was carried in the monstrance. The route was less than a half-mile through Riverfront Park and began with music from Little Rock’s Cathedral of St. Andrew choir.

Stations included prayer and music from the Igbo Mass community, Team Jesus from Christ the King Church in Little Rock, Filipina Community from Little Rock and St. Jude in Jacksonville, Knights of Columbus Council 812 and Students for Life.

“We have to do what is right and pray for life,” said Contreras, a parishioner at Our Lady of Guadalupe Church in Glenwood, adding that for young people, “It’s a journey toward sainthood. We want to be saints and help them strengthen their faith toward God.”

“It’s important for people to know there’s another side to the story and people to help,” she said.

Congregants gathered for adoration and rosary before Mass, led by Matthew Phillips and Angela Owen. Music for the Mass was provided by the bilingual choir of Our Lady of Good Counsel Church in Little Rock, directed by Elizabeth Reha.

Friends Matthew Connolly, 40, and Emiliano Bell, 33, from New Jersey, attended the Hearts for Life Conference, the Mass and the annual March for Life in Little Rock, hosted by Arkansas Right to Life. They have been traveling for the past 10 months to pro-life events across the country. Bell, who has arthrogryposis, causing his joints to be locked, was abandoned as a newborn in a dumpster in Mexico. He was adopted by a U.S. family.

“Because no child, no baby belongs in the garbage can. Also, one never knows if that child might become the future president, the future Pope or just change the world in in their own quiet way,” Bell said of why the pro-life message is close to his heart. “It was great to be here.”