Three parishioners reflect on his life, legacy and what they learned from preacher, activist 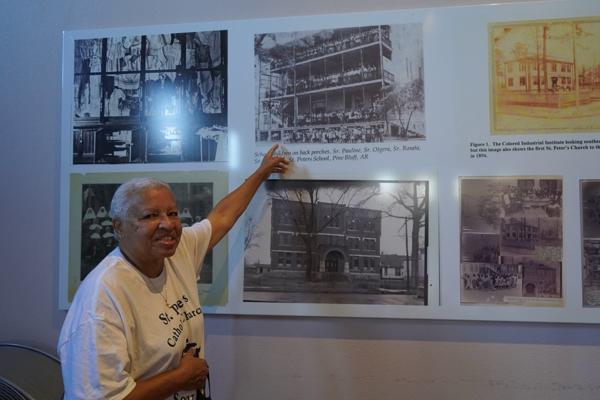 Aprille Hanson Spivey
On Jan. 13, Juanita Currie, 75, a parishioner at St. Peter Church in Pine Bluff, points to historic photos of the former St. Peter School where she attended. In the late 1950s, Currie said race issues were not discussed by the nuns who ran the school, but it was prominent in their lives and in the news as civil rights leaders like Dr. Martin Luther King, Jr. pushed for change. Currie and other Black Catholics reflected on King’s legacy.

Aprille Hanson Spivey
On Jan. 13, Juanita Currie, 75, a parishioner at St. Peter Church in Pine Bluff, points to historic photos of the former St. Peter School where she attended. In the late 1950s, Currie said race issues were not discussed by the nuns who ran the school, but it was prominent in their lives and in the news as civil rights leaders like Dr. Martin Luther King, Jr. pushed for change. Currie and other Black Catholics reflected on King’s legacy.

In 1958, Dr. Martin Luther King Jr. spoke to students at what is now the University of Arkansas Pine Bluff, and student John Jacob was in the crowd.

“I did meet him. Because I was nosy, I walked up and introduced myself to him,” the now 84-year-old Jacob said.

While he doesn’t remember the exact conversation they had, the impact of meeting the man who changed his life stays with him.

“He was a great, great speaker and he just really made me feel good and at the time, I suppose, expecting that things would change,” Jacob said.

“He was a great, great speaker and he just really made me feel good and at the time, I suppose, expecting that things would change,” John Jacobs said.

Reflecting on King’s legacy for Martin Luther King Day, Jan. 17, Black Catholics in Arkansas said people still need to advocate for the Catholic teaching of human dignity for all people.

Juanita Currie was a child when King gained national attention for his oratory skills after leading the bus boycott of Montgomery, Ala., following activist Rosa Parks refusal to give up her seat to a white passenger.

A lifelong Catholic, Currie and her family grew up in segregation. St. Peter Church in Pine Bluff, where she still attends today, was the Black church and St. Joseph where white Catholics went.

“Our church is very heavily integrated now,” the 75-year-old said. “We know each other, we understand each other, we respect each other. We don't necessarily know what politics we all have and everything but even that we respect.”

Currie attended the former St. Peter School from 1953 to 1961. It was strictly “academics and saints with the nuns,” and racial tensions were not discussed.

“We lived in the midst of a lot of that chaos. And then having the parents that most of us had, the kind of parents that were just kind of rooted in wanting change, but they espoused non-violent resistance, peaceful resistance. They wanted change, they needed change, they instilled it in us to do different, do better,” she said.

But in the 1960s “everyone was mad about something, kind of like now,” Currie admits, saying her perspective was less about faith guiding her actions toward social justice.

As a teenager, she remembers marching in protest. Her parents, Dr. Daniel Young and Georgia Young, a pharmacist and owner of a beauty school, respectively, provided financial support, causing her father to be “blackballed” for supplies and financing for his business. Her brother Joseph Young “went to jail more than once” for the cause, she said.

For a time in the 1970s, it was hard to reconcile the Church’s complacency about race. For several reasons, she fell away but came back because of her young son’s zeal for the faith and the pastor at the time, Father Tom Mullally, SVD, who addressed the issues and “beat the bushes and got folks back in church.” Outspokenness on racial issues is what the Church needed then and now.

“I think the Church may have tried to subtly address it. They would take a stand on some things but in my thinking it was more lip service,” Currie said. “I think that’s the way most of us saw it because they weren’t implementing it. We were still going to segregated schools.”

Today, her social justice work is tied to her faith, most notably the past nine years helping to run the Saturday Soup Kitchen at the parish and working with the Neighbor to Neighbor food pantry. She was awarded the Daniel Rudd Memorial Award in 2017 from the Diocesan Council for Black Catholics.

“I may not go to church five, six, seven days a week or any of that, but I practice it, and I believe it,” Currie said. “And 90 percent of it is based on the Catholic faith, and the other 10 is just on doing right.”

Standing up by sitting down

Jacob moved to Arkansas in the summer of 1957 to attend college. The cradle Catholic was born and raised in Marxville, La. Driving back to his hometown one day in the late 1950s, he and others stopped in Hamburg to use the restroom.

It was one story in a lifetime of experiences. When Dr. King rose to prominence, Jacob said it was the first time he began to see someone finally standing up for Black people.

“Even here in Pine Bluff, we boycotted and also had some sit-ins in local restaurants and had demonstrations and so forth. It impacted me and many of my classmates in a way we had never seen before because we had come through complete segregation and pretty much accepted the way life was at the time,” Jacob said. “And, of course, when Martin Luther King and all these other leaders started these movements, we weren't as afraid as we were.”

Jacob and others became persistent and on fire for change.

“When we would sit-in, the management of the establishment would refuse to serve us,” he said. “We sat for a while and leave. We’d come back again until things finally started changing.”

When King was assassinated April 4, 1968, Jacob said it was traumatic.

“When I finally recovered from my feelings from the assassination, it just reinforced the feeling in my mind, my attitude that things were going to change,” he said.

Jacob was an educator for 40 years, 38 in public schools and two years as principal of St. Peter School. He was awarded the Daniel Rudd Memorial Award in 2018.

The fight against systemic racism is still alive today.

“Voter suppression. That’s what he would be advocating against if he were here right now,” said Debrah Mitchell, parishioner at St. Augustine Church in North Little Rock, of King, a longtime advocate for the passage of the Voting Rights Act, enacted in 1965. “I think his message would be just as strong as in the 1960s. We have to press on to make sure we get the passage of the John Lewis Voting Rights Advancement Act and the Freedom to Vote Act.”

The federal bills were set to be debated in the Senate Jan. 18 and there was no update as of press time. The Freedom act has several components, including a minimum number of days for early voting, vote-by-mail option for any reason, requiring states to make voting line wait-times 30 minutes or less and online voter registration, according to a Jan. 13 NBC News article.

The Lewis bill, named for civil rights leader and U.S. representative for more than 30 years John Lewis, who died in 2020, would strengthen and restore portions of the 1965 Voting Rights Act, particularly that states get permission to certain voting law changes from the federal government.

A longtime social justice advocate, Mitchell, 57, is a cradle Catholic, assistant chief deputy of the Pulaski County clerk’s office and president of the Arkansas Democratic Black Caucus. However, she said voting rights is a non-partisan issue and falls in with the Catholic teaching of human dignity.

“Voting should be accessible to all people. Not to a political party or agenda, it should be open to everyone. Just like our churches are open. We don’t check IDs,” Mitchell said when someone comes to Mass. “Voting should have the same freedom as when we walk through any church.”

A wave of states have passed voter suppression laws, from limiting absentee ballot voting, limiting the hours and locations of voting stations and shortening the days a person has to early vote — a measure successfully defeated in Arkansas.

Mitchell said historically people of color vote early, not on election day. According to the U.S. Census Bureau, the COVID-19 pandemic likely contributed to the rise of nontraditional voting. In the 2020 presidential election, 69.9 percent of Black Americans voted by absentee ballot or early, compared to 67.5 percent of white Americans.

“People think racism went away when we elected a Black president. And it didn’t,” Mitchell said. “Voting is sacred because we vote with our faith and hope that whoever we are selecting is going to stand up to the issues you believe in.”

Currie and Jacob agreed voter suppression should worry all Americans. In his younger years, Jacob remembers paying a poll tax to vote and having to show his ID.

“All Catholics and all citizens should be concerned because … when you restrict people from voting, that’s a problem because that’s a basic tenant of our democracy,” he said.