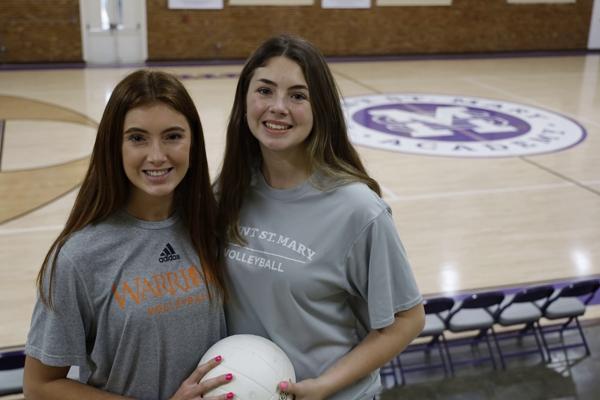 Sibling sets are nothing new at Mount St. Mary Academy in Little Rock. When a school has been in continuous operation for more than 170 years, catering to Arkansas’ comparatively slight Catholic population, the same surnames appear here in bunches.

The same can be said for MSM’s athletes through the years. Culled from the ranks of those multi-generational families, sister has pitted against sister (and cousins, and second cousins, etc.) over roster spots and playing time for decades.

Among the latest of these athletic siblings are the Williams sisters, who are leaving their mark in volleyball in a big way. And even though Catalina (Class of 2021) and little sis Harbor (Class of 2025) have never played with or against each other in organized play, the competitiveness that burns between them is one big reason for their success on the court.

“We do have some competitiveness between us over how we’re doing from our two standpoints,” said Harbor, 14. “It’s not very big, but it’s definitely there.”

“We have a really good relationship,” said Catalina, 19. “We like going into the gym and hitting balls with each other. We push each other competitively. Not like we’re being mean, we’re just pushing each other to be better.”

The niceties are all well and good, but the sisters also do not yield a step to the other. Asked what part of her game is behind her older sister’s, Harbor paused.

“Honestly, I’m not sure there’s very much,” she said. “I’ve peaked more than she did, compared to where she was when she was my age.”

Catalina, unfazed by her younger sister’s bravado, welcomed the good-natured back-and-forth for what it is.

“Throughout the season last year, we’d be like, ‘Whose team won more tournaments this year? Whose team won more this weekend? Who came home with more medals this year?’” she said. “Even in the gym over Christmas break, we did strength training with each other, and we’d be like, ‘OK, who’s going to put on more weight for this, that and the other?’ It’s just funny messing with each other.”

The two athletes mirror one another in many ways — both grew up in Little Rock’s Christ the King Parish, play the middle blocker position, spark energy in their teammates while on the floor and have a work ethic that won’t quit.

But as far as who’s better, most people step lightly and diplomatically around the question, even coaches.

“They both have a high ceiling as far as athleticism,” said Jason Lambert, head coach of the MSM varsity volleyball squad. “They’re athletic; they have high ability. Cat’s a little bit more polished and improved right now, but then Harbor’s just a freshman. However, (Harbor’s) a little bit bigger, and she’s going to be a little bit more athletic than Cat when she gets it all figured out. I think overall they’re both really gifted kids.”

The rivalry almost never happened, at least not in volleyball. As a fifth-grader at Christ the King School, Catalina initially set her sights on basketball, wanting nothing to do with volleyball. At the insistence of her mother, she played anyway.

“I ended up loving it, and I ended up not liking basketball at all,” she said. “From there, right after my fifth-grade volleyball season, I started doing clinics and got going with club volleyball and ended up just loving it.”

Harbor herself got turned onto the game by watching her sister, then followed Catalina’s footsteps at Christ the King, a traveling club team and the Mount. But being four years apart, they were just out of reach of each other in actual competition

“She has a spark to her,” Harbor said of her sister. “You can just tell whenever she’s playing; she’s giving her all. You can tell how much she loves it while she’s playing. She’s a great blocker. She hits very well, very powerfully.”

Such were the attributes that caught the attention of college scouts during Catalina’s time at the Mount, and she’s just finished her first season with Hendrix College in Conway. Though undersized for her position, her grit and preparation paid off during her rookie campaign.

“There were actually three people who played my position, and our senior ended up tearing her ACL. I ended up playing every game after the first game, and I started after that,” she said. “It wasn’t super-intimidating because I’d been through a similar situation in high school with a girl older than me getting hurt and then being thrown in. I had done it before where it was like, ‘OK, I’ve got to get my game face on and do my job right now to help out the team.’”

Catalina not only played, but she also excelled, tying two school records and leading the team to the semifinals of the conference tourney. Harbor, meanwhile, found success of her own, being called up to the Belles varsity roster in addition to anchoring the ninth-grade squad.

With their respective freshman years under their belts, both players are eager to hone their game in off-season workouts, preparing for even bigger things in the future, even if it means listening to their biggest rival.

“(Harbor’s) very hard-headed, stubborn sometimes,” Catalina said. “She’ll listen to me, but she doesn’t always want to listen. But then, I was like that too at her age, with coaches. And sometimes, when she’s tried to give me pointers, I’m like, ‘What are you talking about?’

“But we both have a greater understanding of the game, so we can help each other out more than we were able to do a couple of years ago. It’s fun now.”